Rob Ford looks set to defend his conflict-of-interest case by telling the court he voted on an item he would have financially benefitted from last February by mistake. According documents seen by the Globe and Mail, Ford and his legal team will argue the $3,150 of charity money donated by lobbyists and their clients is not enough to warrant removal from office. The mayor voted to let himself off the hook for repaying the money which was allegedly donated in breach of council guidelines.

Police have charged a 40-year-old Scarborough man with second degree murder in the case of Guang Hua Liu, a spa owner whose dismembered body parts were found scattered across the GTA earlier this month. According to police, Mr. Jiang was the estranged boyfriend of the deceased woman.

A map of proposed nationwide revisions to federal ridings released yesterday could have some effect on GTA residents. If the plans are adopted, several new electoral districts will be created in Brampton, Toronto, Markham, Mississauga, Oakville, and several other Ontario cities to ensure rising population levels are properly represented in parliament.

Just when you thought the transit debate was taking a well-deserved nap - boom! The Star is taking a look at development on Sheppard Avenue now its short subway line is ten years old. According to the paper, it seems rapid transit does beget increased density, though not everyone is entirely happy with it.

Finally, is Toronto contributing to Buffalo's title of "Rudest City in America?" Last week, Atlantic Cities covered a Ukrainian study of America's social media habits that found our near-neighbours were the most likely to start their day with a hearty "fuck you" instead of a charming "good morning." The research mapped the ratio of swears to pleasantries and found the Queen City-area was the worst offender. Unfortunately, the angry hot spot also covers Toronto. Fuck!

Can you identify these sepia-toned streets? Answers in the comment section. 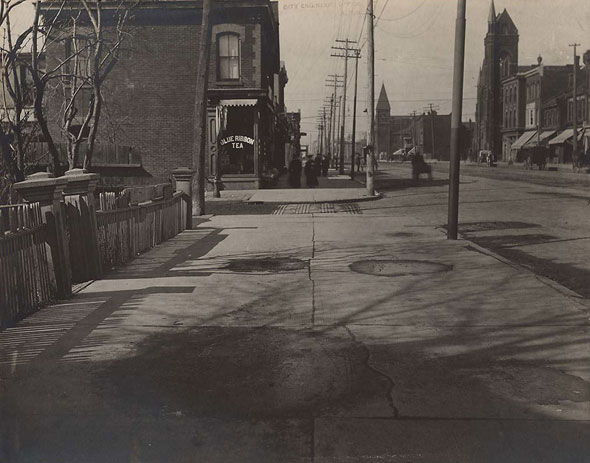