Rob Ford's team has responded to claims by councillor Adam Vaughan that he "barely even shows up for work" by Tweeting an image of him at his desk with councillors Jaye Robinson and Mike Del Grande, captioned "hard at work for taxpayers." Vaughan accused the mayor of shirking his responsibilities when questioned about the streetcar incident in an interview with Toronto Sun. No word on what the hot sauce was working on, though.

Karen Stintz says she should have consulted more councillors before announcing her surprise OneCity transit plan last week because she's worried the subway, LRT, streetcar and bus expansion might not have the votes to clear the first hurdle, a staff study. Despite Stintz's concerns, polls suggest many members of the public support the tax-funded project.

Hold on to your hairdos, councillor Josh Colle wants to kill the city bylaw that says all barbers must hold a provincial hairstyling certificate. Right now, anyone wielding clippers in the name of buzzcuts has to study perms, weaves, and hairdye before being allowed to operate. Colle has asked the licensing and standards committee to study simplifying the rules.

It's not easy staying green if you're a tree in Toronto. There's the tiny concrete planters, deadly invasive insects and the scorching heat reflected from the pavement on days like yesterday. The Star explains what it takes to keep a tree alive in these tough times.

Ever been in the park and wished you could bang out a few choice numbers on the ivories? Your wait could be over, public pianos are coming to Toronto.

Finally, a little validation from Mississauga, where mayor Hazel McCallion is floating a ban on plastic bags in the image of our own. Are we headed for a plastic bag free GTA?

And by the way, Toronto could feel like 50 degrees tomorrow as temperatures climb back into the mid-30s and the humidity ramps up. Holy cow.

Can you name this intersection based on this photograph? Answers in the comments section. 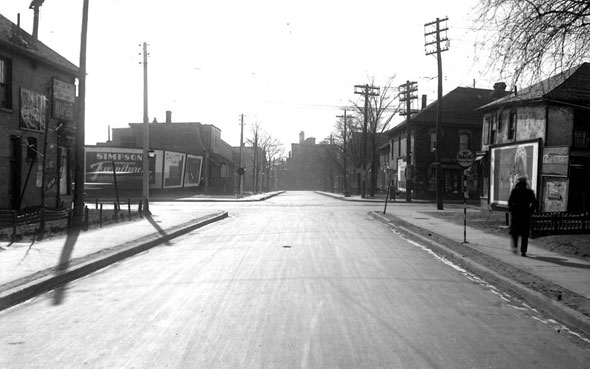