Mayor Rob Ford took time out of his clearly jam-packed schedule yesterday to meet comedians Will Ferrell and Zach Galifianakis at the Hockey Hall of Fame and help promote the pair's new movie, The Campaign. Ford's election advice? Hand out as many fridge magnets, bumper stickers and business cards as humanly possible.

Another big name in the gambling industry has thrown its hat into the ring to build a Toronto casino. According to the Globe and Mail, Las Vegas Sands says it's interested in building a casino in the downtown core, close to the waterfront. Where it goes, no-one knows.

A historic postal station at Yonge and Montgomery streets could be in trouble. Canada Post is planning to sell Postal Station K, which is located on the former site of Montgomery's Tavern where William Lyon Mackenzie orchestrated the Upper Canada Rebellion. The art deco structure is the only one in Canada to bear the insignia of King Edward VIII and some local residents are concerned the site could be cleared for condos.

The City of Toronto is expected to hire a new chief planner later today. Jennifer Keesmaat, an award-winning planner and frequent media commentator, will guide the city to make the best development decisions. Keesmaat has done similar work in several other Canadian cities, including Vancouver, Halifax, Regina and Moncton.

This week there's a whole street to identify. Bonus points for the name and correct identification of the derelict building in this rather bleak scene. 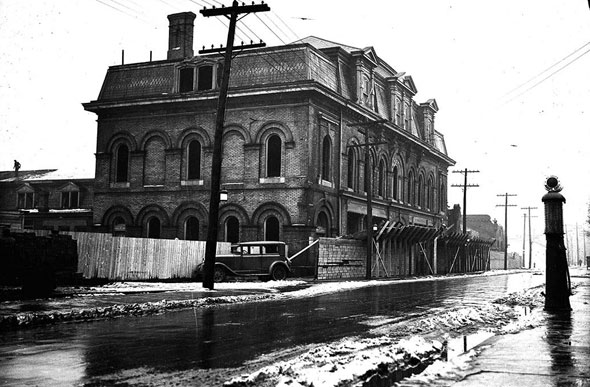 Photo: "TINO8040" by Martinho in the blogTO Flickr pool.