What to do with Ontario Place? Citizens were given the chance to offer their ideas for the now-shuttered park at a town hall meeting on Tuesday night. While there wasn't much consensus on what a revitalized venue would ultimately look like, attendees were mostly united in specifying what they didn't want — namely a casino. Fortunately for them, it would seem that John Tory, chair of the advisory panel on the park's future, is in agreement.

So are the Dupont bike lanes in trouble or not? Cycle Toronto followed up their tweet about a possible removal scenario with a full press release, but according to Dan Egan, Manager of Cycling and Pedestrian Infrastructure, there's been no request from the mayor's office to remove the lanes. Spacing has more on the story here.

What's this? Rob Ford acting genuinely mayoral? He may take his lumps in these pages on a regular basis, but Ford's decision to head down to the Eaton Centre for lunch yesterday deserves praise. Sure, it's not a huge deal — but it showed leadership and care for the well being of this city. Good on him. Kristyn Wong-Tam, it should be noted, also stopped by.

And the award for overzealous headline of the day goes to the Toronto Star, who proclaimed that Queens Quay is set "to become Toronto's Champs-Ã‰lysÃ©es." Yes, the renderings look good, but let's get a grip.

If you like Game of Thrones (quite the finish to season two, no?) and Toronto city politics, this comparative offering from the Toronto Standard is a must-read. Most of the match-ups are intelligent and funny, but Karen Stintz as Daenerys Targaryen — though well justified in the write-up — just doesn't do it for me.

Good news for a Toronto arts festival on the funding front? Yup, the Summerworks Festival will once again receive support from Heritage Canada after it was pulled for last year's event. The indie theatre festival will receive $90,000 in funding over the next two years, which is great news.

In case you missed the transit of Venus yesterday — or if your pinhole projector sucked as badly as mine — here's an ultra high definition shot of the event courtesy of NASA. Sun big. Planet small. 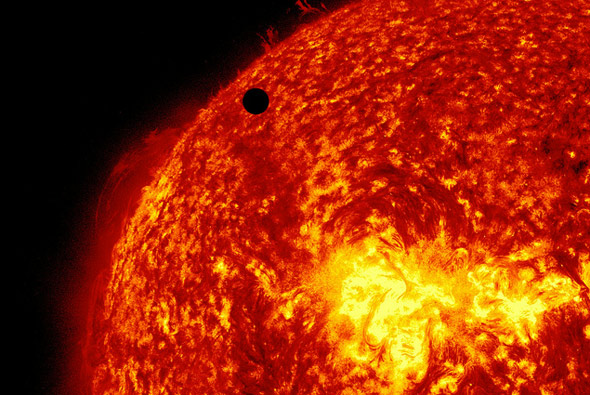 Photo by Richard Gottardo in the blogTO Flickr pool