Police are hunting a man they say is responsible for a deadly shooting yesterday afternoon at an ice-cream parlor on College Street. One person was killed when a lone gunman dressed as a construction worker opened fire around around 3:30pm, sending soccer fans running for cover. The incident is the latest violent attack in a year that's already seen an increased amount of gun crime.

A report from Ontario's chief coroner says bike helmets and side guards for heavy trucks should be mandatory to help reduce the number of road deaths in the province. 73% of the cyclists examined in the study were not wearing a helmet at the time of their death, but some cycling advocacy groups feel a helmet law would discourage new riders climbing into the saddle. This is a tough one. But, really, why not wear one? They don't even look particularly dorky anymore.

Well, it's all over, and Rob Ford says he could have done better in his "Cut the Waist" challenge as he weighed in at 313 lbs yesterday, down 17 lbs from his start weight. Doug Ford fared a little better - dropping 25 lbs - since the pair started the challenge in January. The mayor appeared to twist his ankle as he stepped down awkwardly from the scales.

Environmental groups are concerned that the quality of soil excavated from the Eglinton LRT project could be unsuitable for use in the Humber river mouth to create a small group of artificial islands. Toronto Water, however, says there's no reason to be believe the deep soil has been contaminated with petrol or other pollutants.

Can you imagine the sounds of Toronto's streets played by an orchestra? The squeal and glide of the streetcar, the rumble of the subway, and the swish of cars from the Gardiner could all be worked into a new piece by the Toronto Symphony Orchestra - and you can add your own suggestions.

Props to Toronto from the fun folks at the International Parking Institute! Lot C146 at Broadview and Gerrard - home to the Zhong Hua Men Archway - has won an Award of Excellence for its decorative feature.

And finally, there's a heat and humidity advisory in effect for Toronto today. The temperature is supposed to reach 34 this afternoon and it could feel like 42 with the humidity factored in. Stay cool, Toronto, stay cool.

See if you can pick out where this picture was taken. Name both streets in the comments section, if you can. 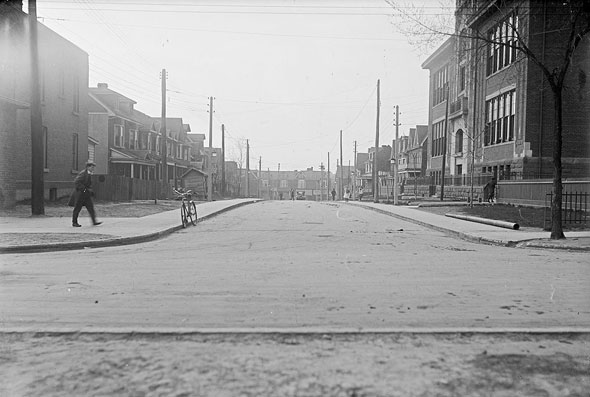 Photo: "Last Picnic" by syncros in the blogTO Flickr Pool.