One down, one to go. The Retail Council of Canada says it won't file a lawsuit against Toronto's bag ban because it assumes council did its legal homework when it approved the measure, a spokesman said. No word yet on the Canadian Plastics Industry Association, who could also have a beef with the ban. Also in bags, The Star has a list of other Canadian cities considering following our lead.

Ontario Lottery and Gaming Corporation chair Paul Godfrey says he isn't concerned that Ontario Place is officially off limits for a Toronto casino, telling CBC the OLG is still looking at possible venues and we'll just have to wait and see what they cook up. Completely off topic, Godfrey is a dead ringer for Christopher Walken in the CBC article's photo.

It's been at least a two weeks since we last heard mention of the long lost Downtown Relief Line. Speaking at a media event yesterday, TTC Chair Karen Stintz said she believes the DRL should be the city's next priority when it comes to transit, while CEO Andy Byford said he feels the "tide is beginning to turn" to get the project started. The problem, as ever, is money. And Rob Ford says he's against a sales tax to fund new infrastructure.

High Park bikers rejoice - a new officially sanctioned trail with jumps and ramps will be in place by Fall. Designed by British Columbia's Jay Hoots, the dirt, rock and wood structure will be built just south of the park on Lake Shore Boulevard West and replace an unofficial run removed last year.

Hang on a sec, is that city hall making a cameo appearance in Max Payne 3? Certainly looks like it. (via Reddit)

And finally, the smog alert in place for the City of Toronto over the last few days is now officially over. Breathe!

It's been a while since we threw down a mystery pair of streets for you to identify. See if you can guess where this is: 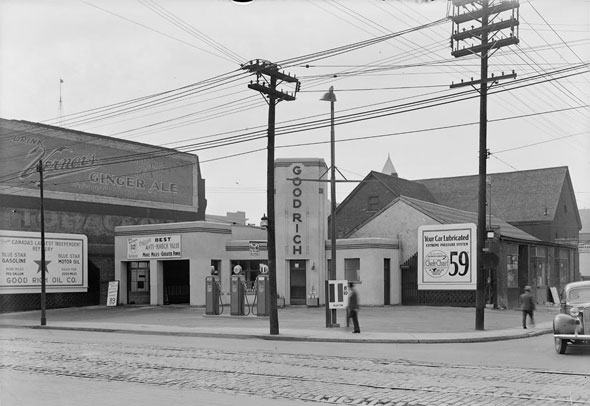