Morning Brew: One-way coming to Yonge and Bay?, Real Jerk on the move, A bad day at council for Rob Ford, reviving the Don, and the Jays lose

Councillor Denzil Minnan-Wong says one-way traffic on Yonge and Bay would make space for new bike lanes, reduce traffic and allow for other infrastructure improvements. "You look at New York City, how are they able to put on bike lanes, well, they have these wide streets with unidirectional traffic," Minnan-Wong told reporters at yesterday's council meeting. It's just an idea that requires further study at this point, but what do you think? Would such a move benefit all parties as the councillor seems to believe?

The Real Jerk will leave its famous spot at Queen and Broadview at the end of the month - where it goes, no-one knows (yet). Ed and Lilly Pottinger, the Caribbean restaurant's owners, say they will announce the new location in a few weeks when they sign the lease agreement. The famous Riverside eatery earned an injunction in December to stay put for at least a year after the landlord served notice.

After refusing to speak to the press, which included The Star's Daniel Dale, at his weigh-in, Rob Ford lost a vote on a relatively minor issue. The mayor had championed a motion to stop the city hiring outside planners to appear at Ontario Municipal Board meetings, a policy that costs between $10,000 and $20,000 a pop. Council will resume today.

In other Ford news, the mayor will once again skip the annual flag-raising for International Day Against Homophobia and Transphobia at City Hall. Here's the Globe on why this is dumb move. There are, perhaps, other words one could use.

If you thought Rob Ford's run in with Daniel Dale was the first time a Toronto mayor was involved in a controversial incident with a reporter, then this Grid article is for you. Jamie Bradburn looks back at the time Mel Lastman threatened to kill Adam Vaughan (then a CBC reporter).

Spawning salmon, singing birds and happy canoe rides are hardly the first things that spring to mind when you think of the Don River. In a Globe and Mail piece, Bernie McIntyre from the Toronto and Region Conservation Authority says there's hope for the used and abused Don yet - improving fish stocks and reduced pollution are helping the river support life once again.

See if you can place these streets. 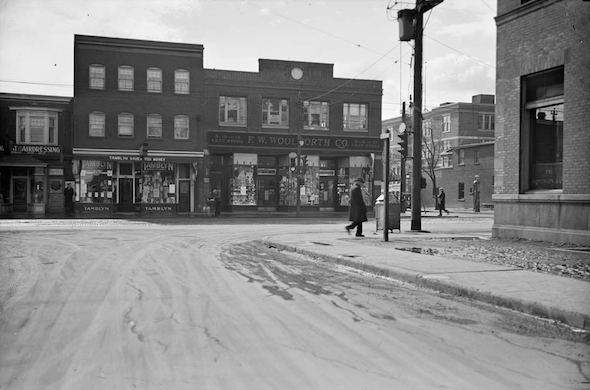 ANSWER: As correctly guessed by commenter YYZGYY, it's Logan and Danforth before recent adjustments. Last week's answer was Wilton (Dundas) and Church.

Photo: "One on One" by HilarioDCGIII in the BlogTO Flickr pool. Historical photo from the Toronto Archives.