Rob Ford says a casino at Exhibition Place would net the city around $100 million a year, the most of all possible locations in the GTA. Yesterday, MGM restated its interest in the project, but there won't be a decision of any kind from council until fall at the earliest. The international gaming company prefers a resort at Exhibition Place, Ontario Place or the Port Lands. Over at Torontoist, Hamutal Dotan has a good primer on the potential implications of a casino development in Toronto.

Council's Executive Committee voted to rescind Toronto's bag "tax" yesterday but The Star suggests the scope of the fee could actually be expanded once the issue goes before council next month. Councillor Michelle Berardinetti wants to recover some of the money - which currently goes to retailers - to fund urgent maintenance of the city's tree canopy.

Spacing's John Lorinc offers an interesting solution to the GTA's transit woes in his latest column - co-operation! If the TTC and Metrolinx (Ontario's transit authority) shared board members and generally worked together to integrate transit services we'd all reap the benefits. Just imagine - a Presto card that works at every TTC station! Subway stops that connect with with GO stations! Puppies! Kittens! Unicorns flying over rainbows!

GO Train riders will be able to claim a refund if the train is more than 15 minutes late starting later this year. The catch? No money back if the delay is caused by extreme weather, a police investigation, accident or medical emergency. Guess there's no point faking a heart attack then.

A few years ago, city council moved the Joy Oil station on Lake Shore Boulevard, renovated the exterior, locked it up behind a fence and then, well, threw away the key. Since then, the $400,000 project has languished in bureaucratic limbo. The National Post's Peter Kuitenbrouwer looks at some of the political problems facing the building.

New additions to Toronto's rich Tumblr tapestry are always a welcome sight - and Toronto Strife is no exception. On the site, a selection of animated gifs are used to describe various facets of Toronto life. They are all are pretty much all excellent, but I'm sure you'll find your own personal favorite. (Thanks to OpenFile for bringing the site to light).

Yep, it's that time again. Can you tell where this grocery store is located? Discussion in the comments section. 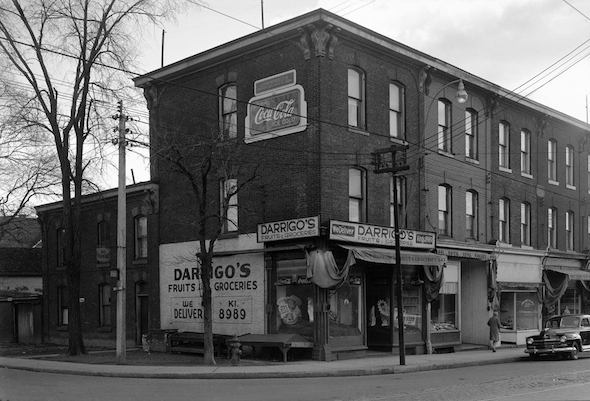