A bruised and bloodied Occupy Toronto protester arrested during a encampment eviction on University Avenue is alleging police brutality. Angela Turvey's arrest was caught partly on camera. She claims cops broke her nose and orbital bone during the scuffle. Protests continued through the weekend. Bail hearings are set for today.

City Councillor Joe Mihevc wants to end talk of "the St. Clair disaster" by having the TTC study the real impact of the streetcar right of way on traffic and businesses. Some subway supporters use the separate streetcar lanes on St. Clair Avenue as an example of everything that could go wrong if light rail is installed elsewhere in the city. Mihevc says the negative press has adversely effected the area and wants the record set straight.

A legal challenge by Toronto Cyclists Union could prevent the scheduled removal of the Jarvis Street bike lanes. The lanes are due to be replaced with a reversible car lane once fully-separated bike infrastructure is complete on Sherbourne. The removal of the Jarvis lanes was seen as an important victory for Mayor Ford but the union has been vocal in their opposition calling the reversible car lane "Mayor Ford's quarter million dollar Gravy Lane."

The Globe and Mail has been catching up with five people who voted Ford at the last municipal election to find out how they feel now about the at-times controversial mayor they helped into office. Each person was asked if they would cast a vote to re-elect the mayor at the next election and a series of other questions. The consensus? 3 would vote Ford again, 2 have other ideas.

About 250 Toronto residents dropped by the Design Exchange on Saturday for a public information session on the Port Lands revitalisation plan. A reduction in the amount of green space along the Don River and the need for good transit development are among the big issues up for discussion. All up, the development is projected to cost over $3 billion dollars and take more than 100 years to complete.

Apparently not just anyone can legally busk on the subway. All musicians need to pass an annual audition to make sure they're up to snuff - unless of course they are Billy James, the only person to hold a lifetime pass from the TTC to serenade commuters. The National Post chatted with James about his favourite busking spots and personal struggles. Want more TTC busker info? Check out these profiles via our Pinterest page.

The Toronto Zoo has selected a name for its polar bear cub born in February from roughly 40,000 competition entries. The little critter's name is Hudson, presumably after the bay where he should be living. Other names in contention were Porkbun, Polaris, Klondike, Snowball and Boreas. In other animal news, several of Toronto's small zoos are still in danger of closure.

Sunday was for suckers as pranksters across the world celebrated their big chance to make the rest of us look like chumps. Perhaps the best Toronto-related prank was Sam Javanrouh's CN Tower EdgeSwing ride (see top photo) that surfaced on Reddit and in the BlogTO Flickr pool. Elsewhere, Google Maps converted their satellite image option to 8-bit mode, making the world seem like a SNES NES game. As OpenFile notes, Google took time to render a little CN Tower to mark Toronto.

See if you can guess this complex, tree-shaded intersection. 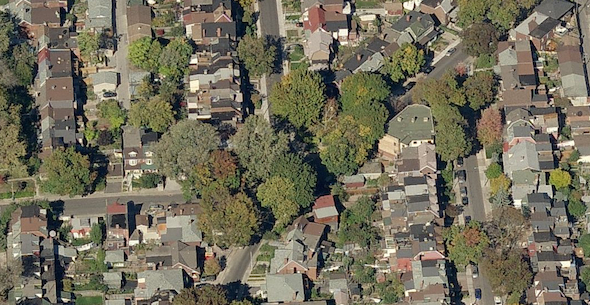