The Woodbine slots, this ain't. MGM, the owner of the Bellagio, Luxor, Mandalay Bay and The Mirage casinos in Las Vegas, has started lobbying to build a giant "integrated resort" in the Toronto area, according to the Globe and Mail. The company reportedly says the resort would be only 10% casino - the rest would presumably be hotels and other glittering shrines to gambling. "We know the big boys are coming to town," Councillor Doug Ford told the paper. So does this make the idea better or worse?

What can Toronto learn from L.A., a self-confessed "car capital of the world", when it comes to funding public transit expansion? As it turns out, plenty. Richard Katz, a member of L.A.'s Metropolitan Transportation Authority in town to deliver a keynote speech, has discussed some of his innovative ideas for generating revenue with Torontoist. Ideas from La-La Land include saving a percentage of gas revenue for transit and a half-cent tax rise to fund new subway and LRT projects.

It might have been completely staged, but there were nonetheless girls wearing lettuce bikinis at the Fords' weigh-in yesterday, and that's news I guess. The PETA publicity stunt was publicised well in advance ostensibly to encourage the mayor to switch to a vegan diet, but, as expected, Rob Ford didn't think much of the basket of vegan treats on offer - one of his staffers claimed the gift on the mayor's behalf. Who would have thought two girls in edible bikinis would have created such a buzz?

Far Enough Farm is the latest city menagerie in need of rescue. Today is the deadline for parties interested in running the Centre Island attraction next year. Councillor Pam McConnell is working to bundle the farm with Centreville from next year to make it more attractive to investors. Far Enough hasn't received the same publicity as High Park Zoo, another skint attraction, and is still hoping to find an operator for this summer before time runs out.

Terry Papas, the owner of the famous King East diner The Patrician has got the artful interview treatment thanks to MostPassionate.ca, a series of videos shot by film-maker Sean Howard that showcases interesting characters. Turns out Papas sometimes gets pretty frustrated behind the grill and uses painting as a way to vent his emotions.

Guess the intersection is back - and this time it's historical. Can you guess where this picture was taken? 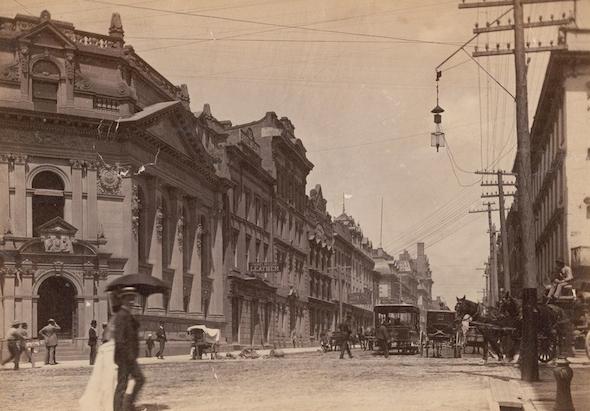