Excavated material from the Eglinton LRT construction site could be used to create a small chain of artificial islands in the Humber Bay, according to The Star. The little archipelago would extend roughly a kilometre from the shore and help protect nearby beaches from polluted Humber river water, provide a wildlife sanctuary and possibly a recreation area.

Contract negotiations between the city and its unions are now over after part-time indoor workers voted to accept a slightly revised offer by the city. The members of CUPE Local 79 voted down the first contract offer. "This amended offer was the best settlement we could reach under the circumstances," CUPE Local 79 president Tim Maguire said in a press release.

Coaches, parents and volunteers that run summer sports programs for kids are up in arms after the hourly usage fees for the city's outdoor playing fields jumped after the recent budget. Many sports groups have already collected money for the coming season and are worried the new costs, which could run to thousands of dollars, may scupper kids' summer outdoor activities.

As we reported earlier this week, the Jarvis bike lane debate is beginning to heat up now the Toronto Cyclists Union have requested an environmental assessment on the city's decision to remove the current cycling infrastructure and return the street to its original five-lane configuration. If you're a little confused about the timing of the TCU's legal action nine months after the original council decision, the National Post has a useful primer.

A University of Toronto scientist has taken home the prestigious 2012 Killam Prize in engineering for his work in machine learning, a process where a computer is able to learn in a similar way to a person. Don't worry just yet, these replicants aren't ready to rise up and enslave humanity, but Geoffrey Hinton's artificial brain has made improvements in pattern recognition, communication, awareness and even basic "consciousness." Be afraid.

The windows of the Yonge Corporate Centre at Yonge and York Mills Road "are the primary killers of migrating birds in the city," a trial has heard. The highly-reflective glass panels are alleged to have killed more than 800 birds, including endangered and protected species such as Canada warblers and olive-skinned flycatchers. According to The Star, property owner Cadillac Fairview Corp. faces several charges related to the environment and protection of animals.

If you've ever been too lazy to buy and carry your laundry detergent then a new pop-up store near Union Station might be for you. Users scan QR codes - those ubiquitous little square barcodes for smartphones - next to pictures of Tide soap, enter payment and shipping information, and wait for the soap to show up in the mail. What could be simpler?

In naked animal news, Torontoist has frightening snaps of a hairless racoon seen near Yonge and St. Clair. The site featured images of (possibly) the same raccoon two years ago in a Parkdale backyard, and now the creepy looking critter is back. Looks more like a dirty, bald kangaroo to me.

Can you guess this peaceful looking residential intersection? Answer below. 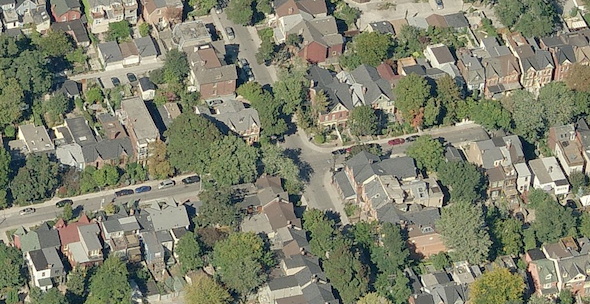