Around 9:30 last night, CUPE Local 4948 announced they had struck a tentative deal with the city that could return 2,300 striking library workers back to work. The union will not release details of the deal unless it is approved by a vote being held at the Westin Prince Hotel this afternoon. So far library workers have been on the picket lines for 11 days.

Members of CUPE Local 79, the union representing Toronto's indoor workers, announced early this morning that it is split on the city's final contract offer. Full and part time workers approved the deal but, according to The Star, part-time recreation workers, long-term care homes and service workers could be headed for arbitration or even a lock-out or strike.

Just when you thought it couldn't get any trickier for the mayor to appear functional, we hear Ford's lawyer has failed to postpone a April 16 audit over an alleged breach of election rules brought by two Toronto residents.

From one Ford to another, Councillor Doug Ford is feeling pretty smug over a report seen by the Globe and Mail due out on Saturday that proposes ways of developing the port lands in years instead of decades. There's no monorail, mega-mall or ferris wheel, but Ford felt confident enough to say "I told you so" — referring to his own plan from last year. "They are looking at mixed use and one of the critical things is transportation. The only thing they are missing is the Ferris wheel," he told the newspaper.

Bed bugs! Everywhere! The city is a constant battleground in the war against the parasitic little creeps and, like every war, it needs funding. Tiny tanks and the like, or something. Unfortunately for anyone with a bed, the provincial runs out on Saturday and there's no new money available from yesterday's budget to keep fighting. According to Inside Toronto, that could spell trouble if the problem isn't solved soon.

Toronto's bylaws have plenty of catching up to do if we're to nurture a quality food truck culture, according to Councillor Josh Colle, who is helping champion mobile eats in the city. The guys over at OpenFile spoke with Colle ahead of today's meeting of the Licensing and Standards committee - the group that makes recommendations to council about this sort of thing - and could be the first stop toward making a positive change. Apparently we should expect increased selection from hot dog stands, mobile fruit and vegetable stalls and a removal of the ban on authorised food trucks operating on a private lot for starters.

Hyper-focused Tumblrs are getting pretty ubiquitous these days, but that doesn't make the good ones any less funny. "Hungry Mayor" is following in the footsteps of "Look at the Asshole in the Bike Lane" to become flavour of the month round these parts. The title pretty much sums it up, but the site is definitely worth a look just for the hilarious captions.

Yesterday it was Total Recall, today Carrie could become the latest Hollywood movie to be (re)made in Toronto. According to Tweets by actress Chloe Moretz, who seems to have been cast in the lead role, the MGM-backed movie will be filmed in Hogtown — possibly for the swine connection — or close by. The Star reports Julianne Moore and Jodie Foster are in contention for the role of Carrie's mother, Margaret.

Let's play guess the intersection. For this first one, we'll start out with something super-easy. 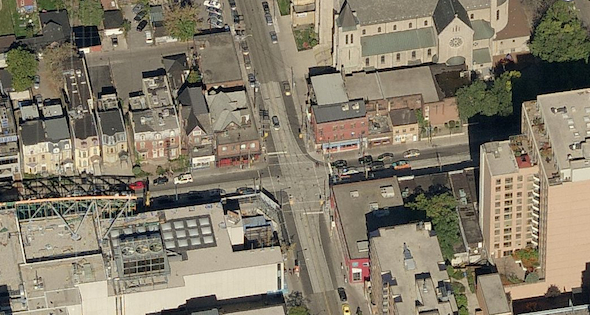