Sure, the recession hit Toronto hard in 2009, but according to CIBC's ranking of the country's 25 largest municipalities, our city bounced back quicker than any other in the country, and in fact, we have the fastest growing economy Canada-wide. So what helped? Our population increased, our employment climbed, and we have more full-time positions.

The CBC has obtained documents from Ontario's top police complaints watchdog (the Office of the Independent Police Review Director) that concludes the five officers involved in the arrest of Adam Nobody at 2010's G20 should be charged with misconduct for using unnecessary force and for discreditable conduct. The report goes on to say that Nobody's behaviour warranted an arrest, and his complaint that he was assaulted a second time could not be proved due to "insufficient evidence."

The LGBTQ club at U of T engineering is attempting to break through stereotypes that the academic program is full of jocks and frat boys by launching an ad campaign this month that depicts the program as welcoming to people of any sexual persuasion. The ad shows an image of a hard hat covered in rainbows, with the text: "My hardhat isn't gay, but I might be."

So how do bike shops fare during the winter? Not bad, actually. The Grid surveyed a few popular shops in the city, like Bikes on Wheels and Curbside Cycle, and found that, yes, business slows down but there's way more year-round cyclists than there used to be, and tune-ups, not to mention sale prices, keeps business steady. 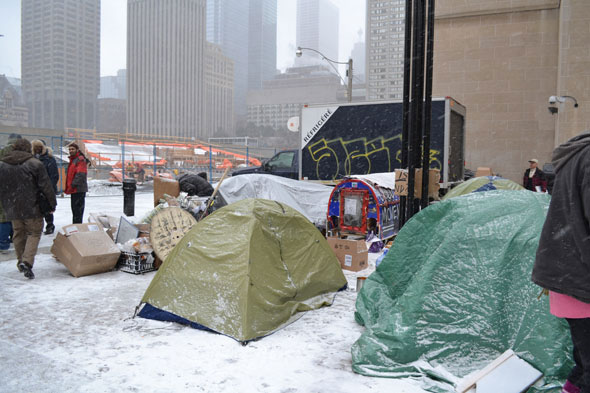 The little occupation movement that popped up near City Hall post-budget meeting was served with an eviction notice yesterday. When we spoke with the small group of protesters early in the afternoon, they siad they'd leave if they were served with written notice, which is what most did, though a few remained late into the night.