Morning Brew: Provincial government is open to the idea of a Toronto casino, budget meetings set to begin, colour coding the city's hydrants, downward dog at the AGO, Ford's weight loss website gets some interesting donors, and Raptors lose fifth-straight

A casino in Toronto? The Ontario Lottery and Gaming Corporation wants one, and it looks like the provincial government could be on board too. The government wants to earn more money from its lottery corporation, which earned $1.9-billion for the province, and so a casino seems to be the next logical step. Sure beats going all the way to Niagara or Orillia. What do you think?

And, the big day has arrived. Starting this morning, Toronto city council will engage in a three-day meeting to discuss and ultimately vote on the 2012 budget. The Sun predicts that it will be a battle, with Mayor Rob Ford hoping to keep a property tax increase to 2.5% and over $80 million in cuts. You know some cuts won't make it through a vote, but which ones?

Turns out the tops of fire hydrants are painted a different colour for a real reason, and not because the city ran out of paint. The city began actually colour-coding their fire hydrants back in 2000 with blue, green, orange or red, which helps to alert firefighters about how much water flow per second is available from each hydrant and determines what hose to use to extinguish fires.

Ever wanted to downward dog in the Art of Gallery of Ontario? Who hasn't, what, with those big windows in the Henry Moore Gallery and the sun streaming in making everything all peaceful and stuff. Well, local yogis have been taking advantage of the space and light in the gallery since last year with a back-to-basics yoga program. 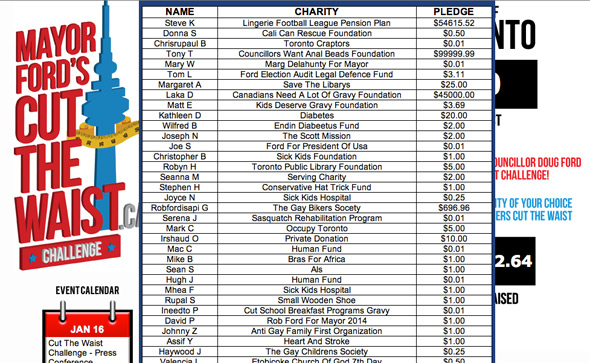 In case you missed it yesterday, Mayor Ford and his brother launched their Cut the Waist Challenge. It was a bit of media circus, but the best part came soon after the weigh-in when a few pranksters had some fun with the lack of security measures built in to the website that accompanies the campaign. We took a screengrab of the pledges page around noon, which was before a moderator came in and cleaned it up.

Photo by marcus kamps in the blogTO Flickr pool