A man was killed during Nuit Blanche. Early Sunday morning at Trinity Bellwoods Park, with Nuit Blanche revelers nearby, a 25-year old man was shot to death in his car. He later died from his injuries at hospital. Police have no suspects at this time and despite the increased crowd in the area at that time, there were, surprisingly, no witnesses.

Well, this sounds familiar. Several cars and signs supporting the provincial Liberals were damaged in the St. Paul's riding last night. If you recall, similar vandalism occurred there during the federal election. Police are investigating the incident.

And if you think all this talk of a minority government has got Premier Dalton McGuinty thinking of forming a coalition, think again. McGuinty basically said "no way, no how" in a letter addressed to PC leader Tim Hudak issued Sunday. The letter came the same day that Hudak told Ontarians the Liberals and NDP might join forces if a minority government seemed likely.

So was Russell Brand denied entry into Canada? Well, if you follow the Brit comedian on Twitter, then you might have thought that since Brand was tweeting how his show at Orillia's Casino Rama had to be rescheduled due to his denied entry into the country. However customs officials and Casino Rama say it was a difficulty with Brand's private jet that was causing the delay. Well doen, big guy â you got us.

And it's not every day that you see this. A reader tells us that late Sunday morning an elderly man "got into a parked car on Danforth Avenue between Greenwood and Coxell, crashed his way out between two parked cars and then spun three donuts in the centre of the road before driving headfirst into entrance of Three's Company Too" cafe..." Check out a photo of the incident below courtesy of Brian Banks, and more images via his Tumblr. 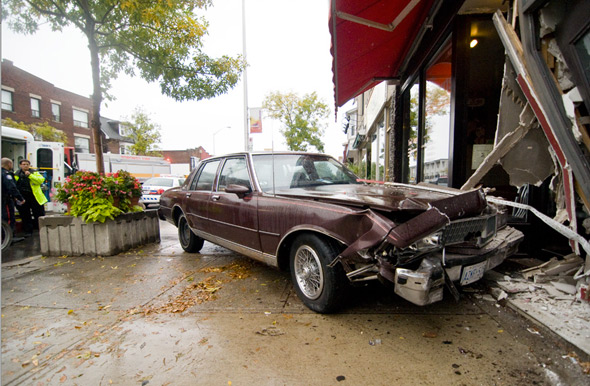 Lead photo by Iainphotos in the blogTO Flickr pool