Get ready for some more "Ford Nation" if a court-ordered by-election proceeds in Ward 9, York Centre. Nick Kouvalis, Mayor Rob Ford's campaign strategist, confirmed he has offered to run Gus Cusimano's election campaign. Kouvalis acknowledges that Councillor Maria Augimeri, who currently represents the Downsview area, isn't "keen" on Ford's agenda, adding he plans to build the by-election as a "referendum" on Ford's progress. For her part, Augimeri is confident a by-election won't happen but if it does, she'll campaign on Ford's record too, proving he's "anti-Downsview".

Something smells fishy about this. The City of Toronto is seeking the dismissal of charges that it improperly allowed sewage to spill into sections of Lake Ontario four years ago because the document — cryptically known as the "Information" — that listed the original offences has been lost. Toronto is accused of violating two sections of the Ontario Water Resources Act, after a heavy storm in December, 2006, swept untreated sewage from the Ashbridge's Bay treatment plant into Lake Ontario over three days. If convicted, the city faces fines ranging from $350,000 to $10-million.

I never wanted to believe in this urban legend, but more and more, it seems to be true. Older ladies love their cats. A lot. The Ontario SPCA has seized about 50 cats from a Toronto home on Manor Road, charging a 63 year old woman with cruelty to animals and causing unnecessary suffering to animals in connection with the seizure. 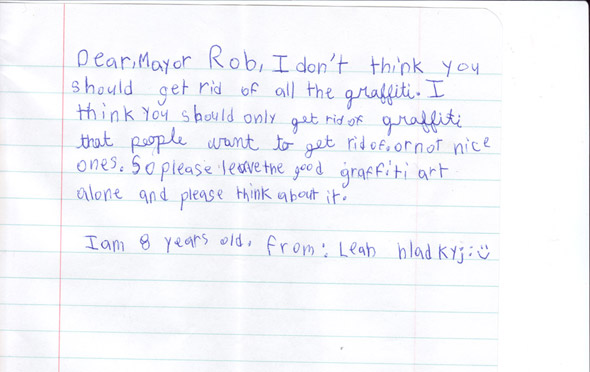 A new voice enters the Toronto graffiti wars! Some might call it misguided, but the above letter from Leah Hladkyj, which was sent to Mayor Rob Ford by her father, just melts our hearts over here. And, besides, she has a point: the City should "only get rid of graffiti that people want to get rid of or not nice ones." Good on you, Leah, for being politically engaged!

Photo by Jared Krause in the blogTO Flickr pool.