Sarah Thomson is set to make "an announcement concerning the landscape of the mayoral campaign" at 10 a.m. this morning (see image below). Bets are that she's dropping out, but that's only speculation. But, should this be the case -- and it's certainly likely -- who will she endorse? Stay tuned for an update shortly after the announcement. Update: It's Smitherman. Read our post here. 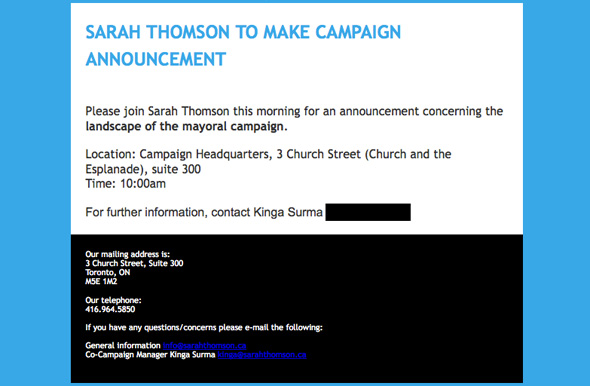 In other election news, a new poll suggests George Smitherman is closing the gap on Rob Ford in the race for mayor of Toronto. A survey commissioned by Global News asked respondents which candidate they would cast their ballot for if the election was tomorrow - 28 per cent said Ford, while 23 per cent said Smitherman. The survey also indicated that support for Pantalone was up marginally, Rossi's support was unchanged and Sarah Thomson's had dropped. Previous polls have rather overwhelmingly suggested a more commanding lead for Ford, making it unclear whether this indicates that Smitherman is gaining ground or simply that polls are useless.

Speaking of Smitherman, the mayoral candidate unveiled his fiscal plan for the city yesterday, with a somewhat controversial plan he says will balance Toronto's budget. "We must restore the city of Toronto's financial credibility while renewing our focus on core services that people depend upon every day," he said at the Economic Club of Canada. Attracting probably the most criticism is Smitherman's idea to secure $100-million annually from the provincial government in funding for the TTC; given that his plan aims to cover what he projects will be in excess of a $500-million shortfall, this is a significant aspect of his budget. The plan also includes the sale of the city's stake in Enwave, the sale of city real estate and cutting 1300 jobs by not replacing some retirees in 2011, a number that would rise to 4000 after four years in office. The plan has caused a lot of discussion among Torontonians, with even Adam Giambrone all atwitter about it. Also check out our coverage of Rob Ford's fiscal plan, also unveiled yesterday.

The Toronto Star looked over the websites and Facebook pages of every single council candidate in the city who has one or the other, and collected some brilliant highlights. From the basic (poor spelling) to the slightly silly (referencing the film Big Fish) to the mystifying ("Sergio Otoya takes a very strong stance against these ridiculous misshapen"), the list is, if nothing else, an entertaining look at the diversity and openness of our electoral process. Now, who's down for some speed-dating with Mark Dewdney?

The prosecutor in the case against the so-called "inspirational leader" of the Toronto 18 is asking for an 18-year sentence. Prosecutor Jason Wakely said that there are mitigating factors in the case which reduced his recommendation from a life sentence: that Fahim Ahmad was a young first-time offender, his guilty plea and family support, and renunciation of violence. Wakely described Ahmad as the leader of a group whose existence is a "crime against our society" and said he had "poisoned" the minds of the "jihadist warriors" he recuited, trained and indoctrinated. A psychiatric report submitted by the defense suggests Ahmad is at low-risk to re-offend and he has expressed remorse in a letter to the court.

This week is "Right To Know Week" in Toronto, meant to encourage Toronto residents to exercise their rights of access to information in the spirit of "open and transparent government".

A fake cab driver is cruising Toronto's streets in a car that looks like a taxi, but has no meter or taxi license. Police located the man on two separate occasions but had no crime to charge him with, though they are suspicious of his motives.

Photo by Subjective Art in the blogTO Flickr pool.