Giorgio Mammoliti is dropping out of the mayoral race, and will instead vie for re-election as city councillor of Ward 7. Most think he stood little chance of being more than a blip on the vote count radar but with his bowing out, right-leaning, fiscally conservative candidate Rob Ford stands to benefit by scooping up the few supporters Mammoliti had.

Queen Elizabeth II was in town this weekend, attending church at St. James, watching the 151st running of the Queen's Plate horse races at Woodbine, and then heading to Waterloo to visit Research in Motion to lodge a complaint about the occasional outages in her Blackberry services.

She was a volunteer for Habitat For Humanity in post hurricane New Orleans, an advocate for the homeless, a soup kitchen volunteer, and an upstanding citizen. But last weekend she was beaten with a police baton, arrested, and charged with unlawful assembly and obstructing police. She also happens to be the daughter of a police officer who worked the G20 security detail. 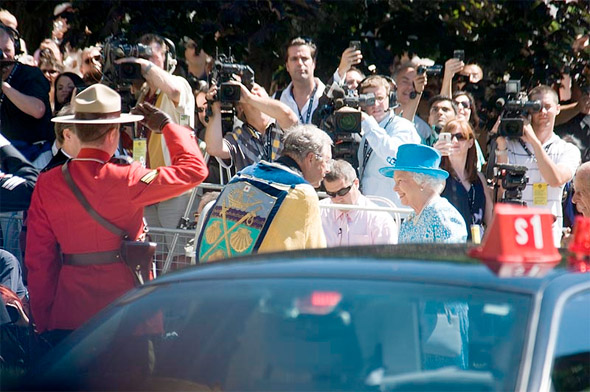 Despite declaring to the media last week that "no targeting of any type of group," was performed by the Integrated Security Unit at the G20, evident is mounting to the contrary. Reports of cars bearing Quebec license plates being pulled over and French-speaking protesters being targeted are coming to light. Still, our politicians are rejecting the need for a public inquiry, instead paving the way for numerous lawsuits including a sizable class-action lawsuit that will very likely be pursued and awarded. Perhaps filing a complaint and seeking the assistance of the UN is next?

The torontotourismboard.com web page has been launched and features recent photos of some of the interactive attractions and most cherished faces our city has to offer. Unfortunately, the domain was registered privately, so I can't easily contact the site's administrator to discuss how the upstart plans to compete with the official Tourism Toronto.

Three men calmly walked away after shooting and killing a 17-year old during a break in a basketball game at Malton Community Centre. About 30 people were there to witness the callous crime on Saturday evening, but police have very little to go on so far.

WTF of the weekend goes to a man who was charged with careless driving near Sarnia after the OPP pulled him over and discovered a bloody tooth, tied to string, which was attached to the roof of the vehicle. Apparently he was trying to remove one of his teeth by driving over bumps in the road.