Special provincial security-related legislation is now in effect until June 28, and most of us didn't know about it until just yesterday, when the first arrest under the temporary law was made. Way back on June 2, the province secretly (i.e. very quietly) passed a new law under the Ontario's Public Works Protection Act that gives police unprecedented powers to arrest anyone within five metres of the G20 security zone who doesn't provide identification or agree to a search. This wasn't open for debate in the legislature, appeared on the province's e-Laws online database with no notice, and has the potential for abuse of power written all over it.

burntheflag: @anarchist24 c u Sat w/ cocktail in hand. it's party time.
Is this punk-rock-loving neighbours in rural Japan planning for a weekend social gathering in the backyard, or an enraged activist ready to launch a Molotov cocktail at the Metro Toronto Convention Centre? Police are watching us closely on Twitter and Facebook this week as part of their billion dollar security strategy. Follow and ask questions of the Integrated Security Unit (RCMP, CF, OPP, TPS, Peel) for the 2010 G8 & G20 Summits on Twitter at @G8G20ISUca.

When is security too much security? An accredited reporter was detained for hours and has an interesting story, people are reporting incidents of racial profiling near the security zone, a number of citizens unlikely to be any threat are facing explosives and weapons charges, 30 officers encircled a man being arrested for pot possession...and the G20 summit hasn't even started yet in Toronto. 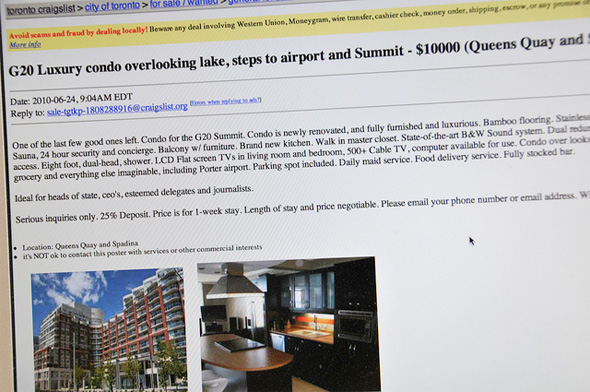 Are you one of those procrastinating, last-minute delegate types who's late making arrangements for accommodations during the G20 weekend? Fear not - there is still "one of the last few good [condos] left," and it'll only set your country's taxpayers back $10,000 for the week. (via picturenarrative on Flickr).

Did I miss the ribbon-cutting ceremony and media cameras, or did the new covered bike shelter outside of the TTC's St. Clair West subway station not get much buzz when it was installed over a week ago? Looks like it's getting good use so far. Hopefully installation of many more of these bike racks around the city is in the cards.

And the controversial Peter Street homeless shelter is making the news again, as time lines get pushed back even further and costs continue to balloon to a whopping $11.5 million. I'm not sure what all the fuss is about though. If we can spend $1.1 billion to host a 3-day conference for the world's fat cats, why can't we spend 1.045% of that on a shelter that helps 40 people in need for a long time to come?

Lead photo by dilligafftw, member of the blogTO Flickr pool.