The privatization of the TTC is a concept that seems to get thrown around a fair bit whenever a serious customer service failing comes to light, but a look at other systems around the GTA and in other cities reveals both pros and cons. On the plus side, full-blown strikes are eliminated and customer service parameters are easy to establish in supplier contracts. But, privatization also involves the serious risk that the companies contracted to provide service may fail financially, leaving taxpayers to foot the bill.

Although it falls beyond the scope of local news, today's lead story in the Star gets mention here so as to save readers from experiencing the overexcitement and ultimate disappointment that its juicy headline caused me. "Conservatives eye new lyrics for our national anthem" got me thinking that that full scale changes were proposed, but the reality is that only one line is under consideration for alteration. "In all thy sons command" may indeed hint at the patriarchal underpinnings of our nation, and is probably worthy of a gender-neutral update, so isn't that crucial aspect of the story worthy of headline treatment?

Although Leafs GM Brian Burke indicated his team would be both a buyer and a seller at the NHL trade deadline, he wasn't able to do much more than dump salary yesterday. Along with yesterday's trade of Alexei Ponikarovsky to the Pittsburgh Penguins, Burke moved Lee Stempniak to the Phoenix Coyotes for fourth and seventh round draft picks. But the biggest news is what didn't get done. According to a number of reports, Tomas Kaberle was willing to waive his no-trade clause to go to three teams. Had he moved, it would have been the most significant deal of the day.

Councillor Paula Fletcher brought a little drama to last night's budget hearing by daring a member of the audience to "come and run against me. Come on down, baby!" Fletcher has since apologized for her outburst, saying that "if my tone was argumentative" it doesn't mean that she doesn't "value [citizen] participation in the budget process." I don't think there's any "ifs" about it -- that's about as abrasive as you can get. 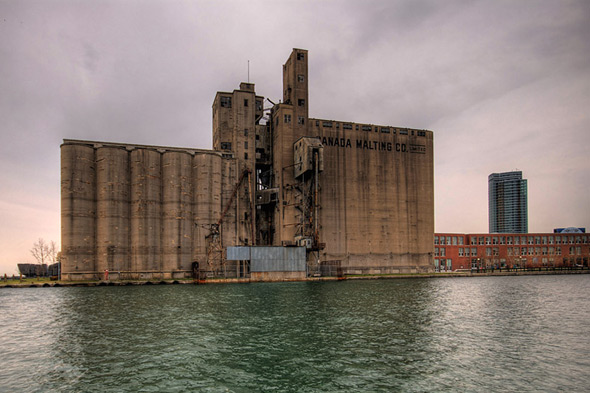 The Toronto Port Authority has formally objected to the designation of the Canada Malting Silos as a heritage site. Citing a 24-year-old agreement regarding the use of waterfront lands, the TPA fears that the designation will impede its future ability to build a parking lot to service the Island Airport (or Billy Bishop Toronto City Airport, as it's now called). Although Port Authority CEO Geoff Wilson claims he has no problem with the heritage designation so long as his land-use rights are protected, I can't help but think that this is a contradictory stance.