Another stalwart of Toronto's Mink Mile has quietly bitten the dust, it would seem, leaving Escada's local future uncertain with only one physical location of the luxury retailer now left in Canada.

The Munich-based fashion brand appears to have abandoned its longtime home at 131 Bloor St. W. after failing to keep up with rent payments on the unique, 3,650-square-foot space it has occupied since 2012. 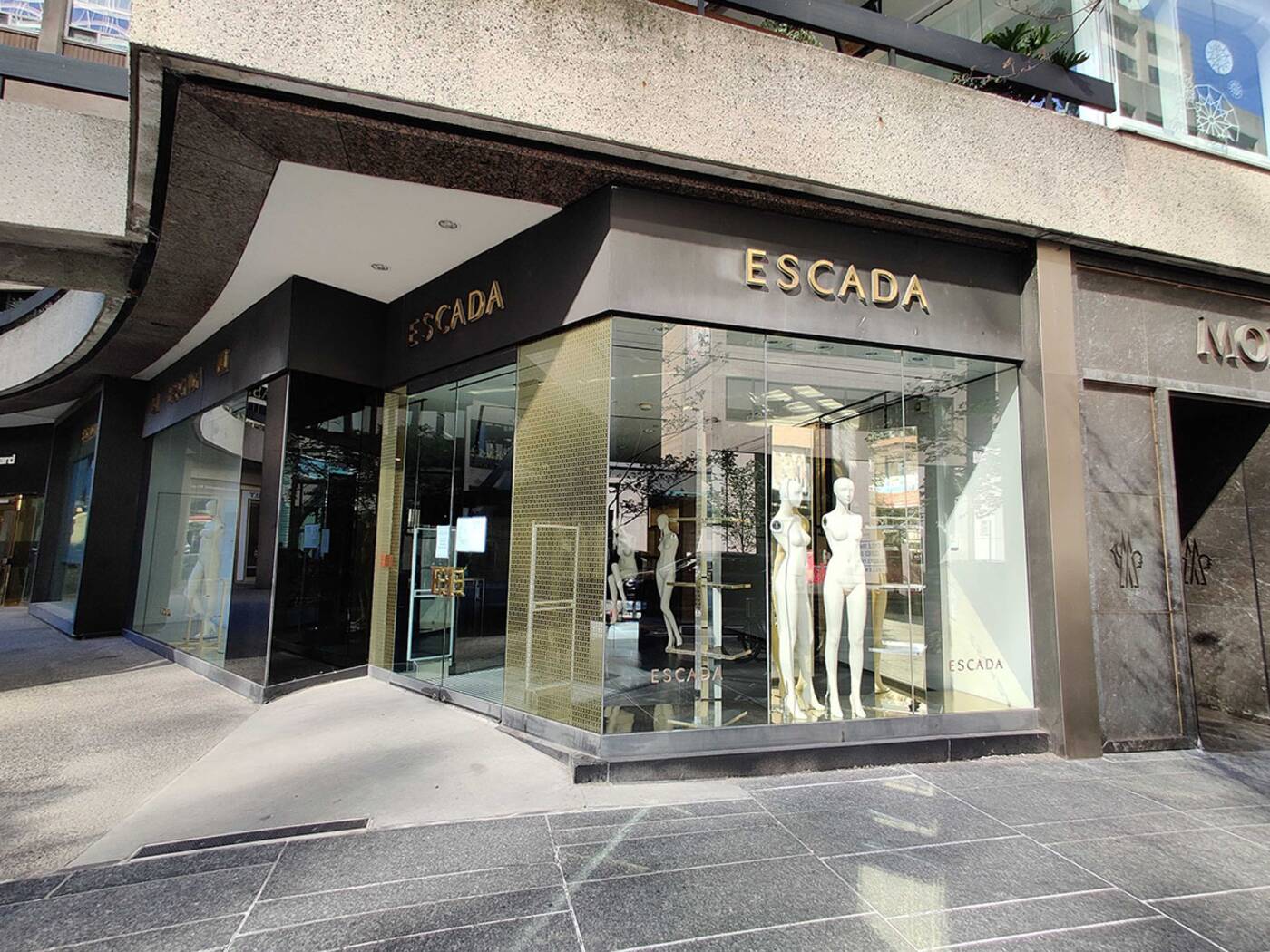 "This location is closing," reads a note posted in the store's front window, right above Escada's iconic logo door handles.

Two additional pieces of paper in the window lend further context as to why the location is closing — and it doesn't look like Escada's departure from the Colonnade plaza was amicable. 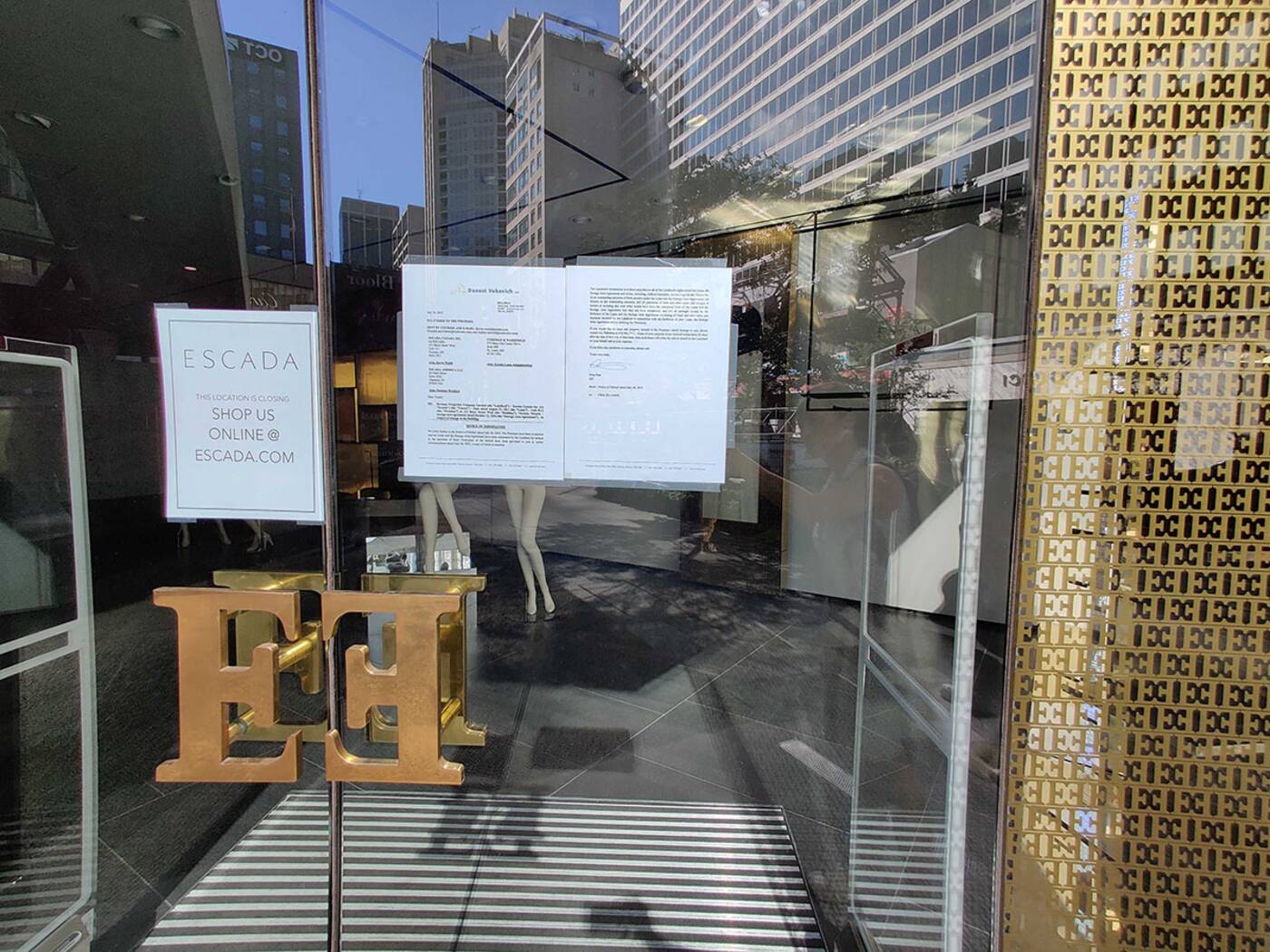 "We write further to the Notice of Default dated July 20, 2022," reads a notice of termination document dated July 28.

"The premises have been re-entered and the lease and the storage area agreement have been terminated by the landlord for default in the payment of rent." 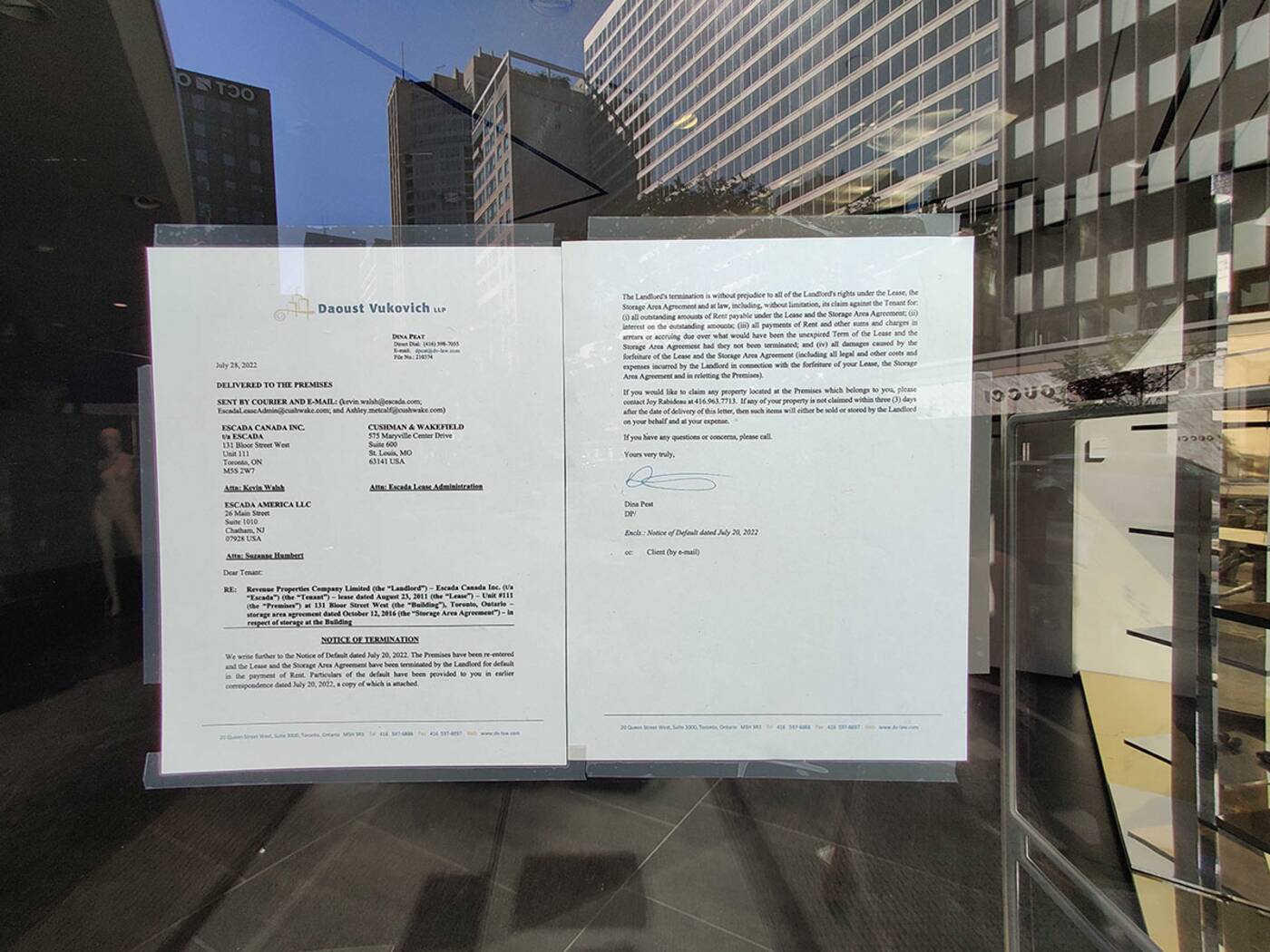 The letter, addressed to Escada Canada Inc. and Escada America LLC, states that "particulars of the default" were provided in earlier correspondence. Thus, it does not include a statement of arrears or dollar amount owing.

Escada Canada has yet to return a request for comment on how much money is owed and the circumstances surrounding the closure of its store at 131 Bloor St. W. 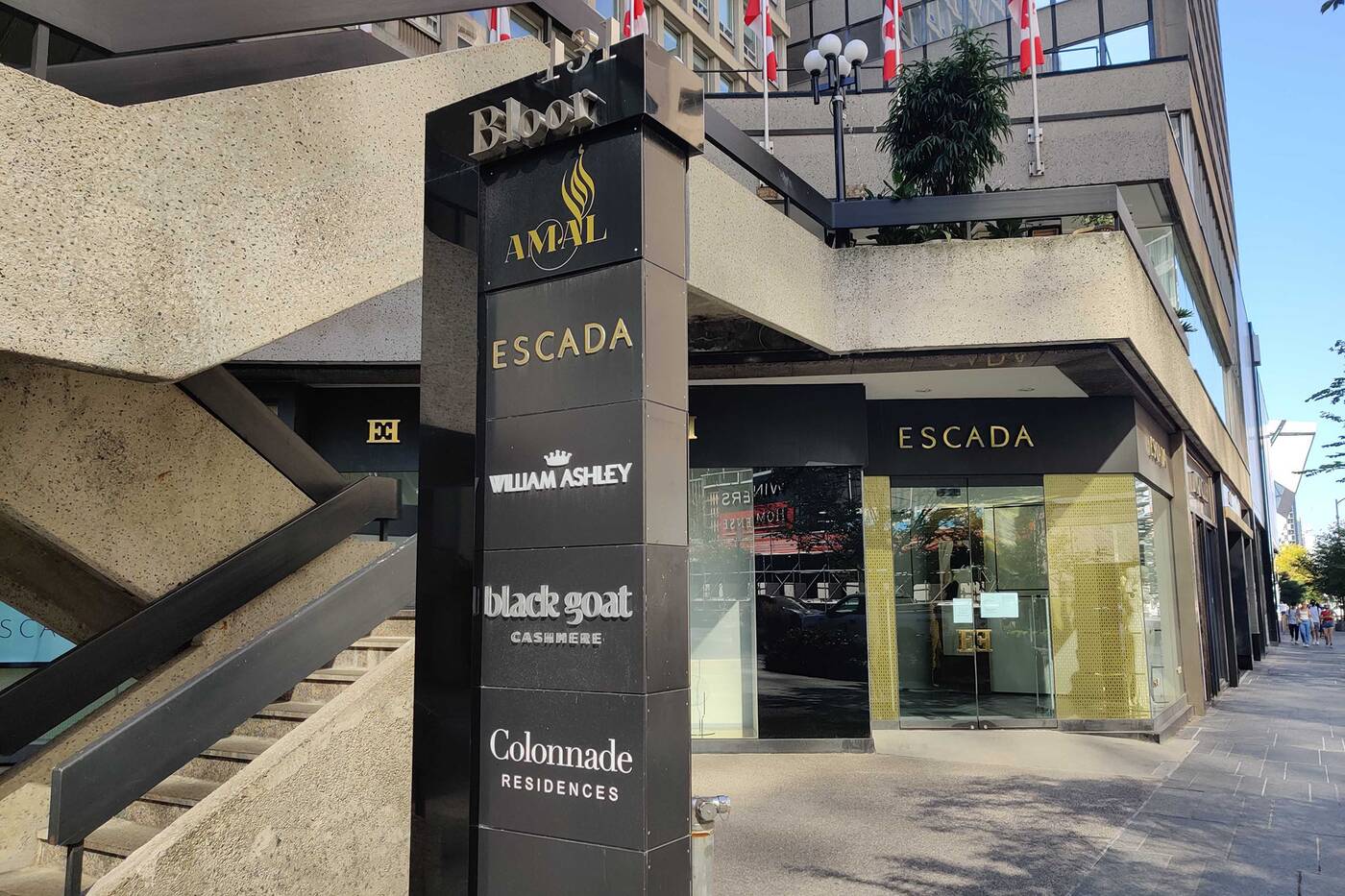 Founded in 1978, the German women's designer fashion brand has boasted a standalone presence in Canada for decades. At one point, in 1990, Escada opened its largest store in the world at a shopping plaza in Vancouver.

In Toronto, before it existed as part of The Colonnade, Escada had a massive store across the street at 110 Bloor Street West.

It moved from 110 Bloor into the space formerly occupied by Mendocino (RIP) in 2012, according to Retail Insider. Before moving into 110 Bloor, Escada could be found on Hazelton Avenue in Yorkville. 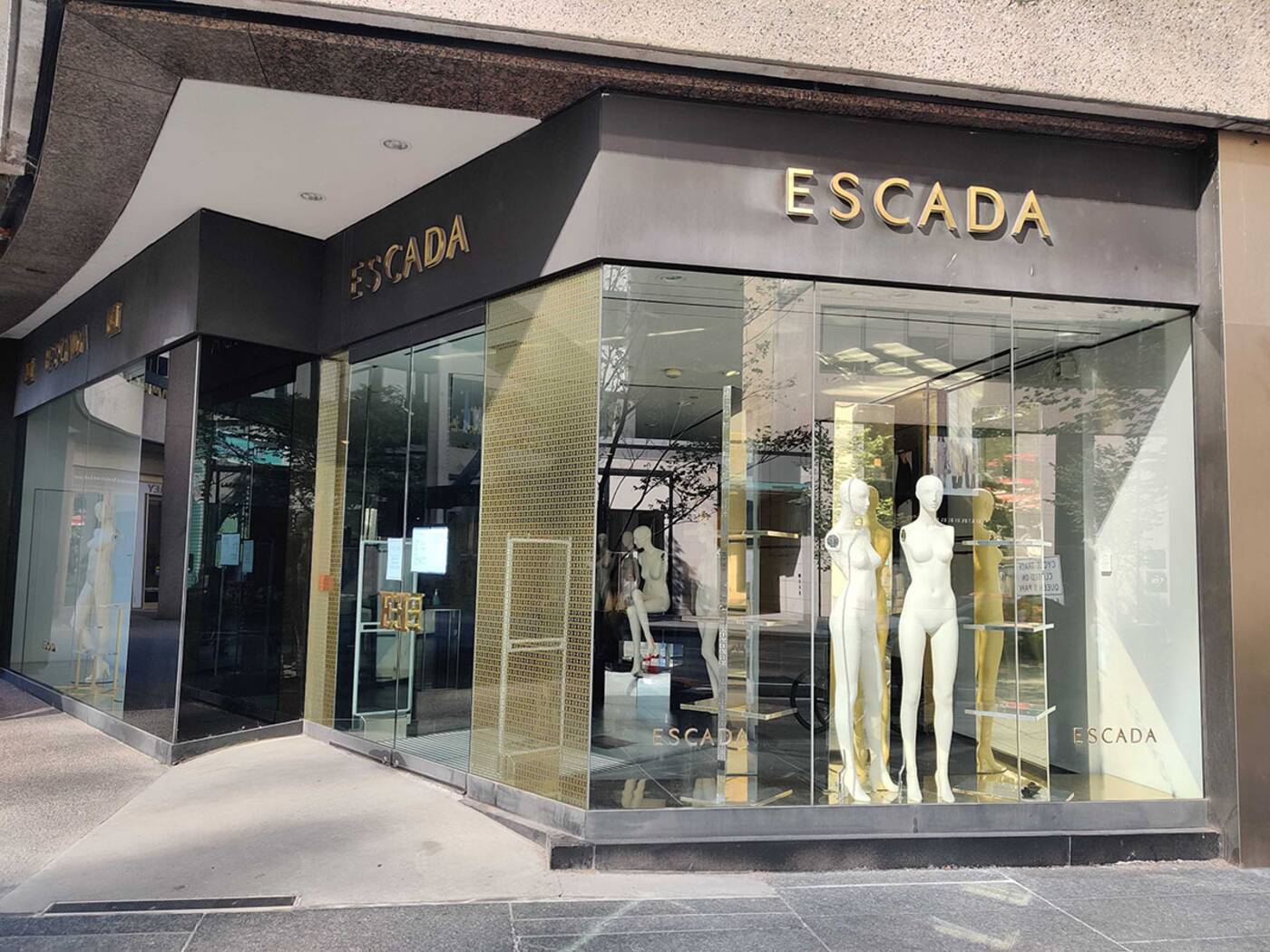 As it stands now, only one brick-and-mortar Escada store continues to operate in Canada. You'll find it at 1214 Sherbook St. W. in Montreal.

I'd say that you could save yourself a trip by buying online, but as of Tuesday morning Escada's website contains nothing but a series of logos with text that reads "COMING SOON."