In the Shoes of an Elizabethan Lady

As a member of the Bata Shoe Museum, I don't take advantage of all the perks it has to offer. I decided it was time to change that, and attended a talk and concert called In the Shoes of an Elizabethan Lady: The Passions and Scandals of Frances Walsingham. The subject happened to be on my favourite items in the Chronicles of Riches exhibit - the slap-soled shoe.

The talk started with a bit of background on how the museum acquired the slap-soled shoe. They purchased the shoes in England, but were not allowed to bring the shoes back to Canada. The government decided that the shoes were too important to British history and wouldn't allow an export license. For many years the museum tried to bring the shoes over. In 2007, they were granted a temporary export license and they were allowed to borrow the shoes from themselves for the Chronicles of Riches exhibit. Once the exhibit is finished the shoes must return to England.

The slap-soled shoe is one of the early versions of the high heel so we were given a brief history lesson. In the 1590's, the heel made its appearance in western fashion. Men were the first wearers of heels and initial uses were military in application. Heels came to the western world via near eastern equestrian wear. Eventually heels were created for women, and the rest is history. 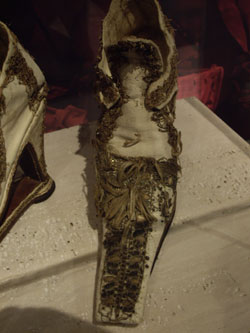 The curator then discussed the life of Frances Walsingham, the daughter of Queen Elizabeth I's spymaster, Sir Francis Walsingham. She had a scandalous life full of multiple marriages, lost loves and jealously. Pissing off Queen Elizabeth seemed to be Frances lot in life. She was secretly married to Robert Devereux, 2nd Earl of Essex and the Queen's lover. It's believed that these slap-soled shoes belonged to Frances, a lady-in-waiting to Queen Elizabeth, but there is still research to be done to prove this conclusively. They do know that were owned by someone in the Essex family.

The Musicians in Ordinary played music from the 1500's to the 1700's. The band consisted of two people, soprano Hallie Fishel and lutenist John Edwards. The museum has good acostics and Hallie's voice sounded incredible. The music was beautiful and haunting but I couldn't help but associate it with Canada's Wonderland. I spent way too much time there as a child riding the Wild Beast and eating funnel cake.

The museum has events almost every week. I'm looking forward to seeing Sense and Sensuality: The Charm of Rococo, a talk about shoes from The Charm of Rococo:Femininity and Footwear in the 18th Century exhibit. It takes place on June 22, 2007 at 7:30pm. Events are free for museum members and cost $10 - $15 for non-members.

See more photos of the slap soled shoes and other great finds in the Chronicles of Riches.