Whether it's the never-ending poop or running out of bags, every dog owner has a dog doo-doo story. My story could be called "The Turds That Almost Got Away" thanks to Toronto's new dog waste pilot project.

The program consists of green bins dedicated to dog waste in a few popular Toronto parks. The aim is to keep dog waste from landfills since about a quarter of park garbage is pooch poop.

Under this new program, the bins only take paper bags with cardboard scoops provided at each park. The city wants to avoid plastic. It's hard to separate from organics, so some of your green bin waste ends up in landfills. This includes biodegradable plastic bags that don't compose in time when they reach the waste treatment plant.

The city just added a green bin to the park in my neighbourhood. I liked the idea, so I tested it out for a few days. Here's what happened.

Day 1: Ponyboy decides to poop on grass three blocks from the park. Bad dog. The scoop keeps pushing the stool farther away from me instead of spooning it up. I finally get it all with the help of a stick after about six tries. I trek back to the green bin in the park, awkwardly holding by full paper bag.

Day 2: Ponyboy poops in the park. Good dog. Again, I have a hard time scooping it up. Maybe it's in the wrist? The bag is also a bit small. Ponyboy isn't a Chihuahua and doesn't poop Chihuahua-size waste.

Day 3: Ponyboy poops in the park. He doesn't feel very well and has the runs. Poor dog. I resort to my biodegradable bags. I don't even attempt the cardboard scooper on this one.

I don't want to discount or "poo-poo" the city's efforts and, in the end, diverting some poop is better than diverting no poop from landfills, but I don't see this pilot flying. It might actually hurt all the years of "poop and scoop" indoctrination. I don't mind the inconvenience of having to walk back to the park. I normally carry Ponyboy's full biodegradable bags back to my green bin at home anyway. But, it's also impractical. It's hard to scoop, I got stinky fingers trying, and it doesn't work with runny poop. I also wonder if the cardboard scooper would hold out when it's wet outside? 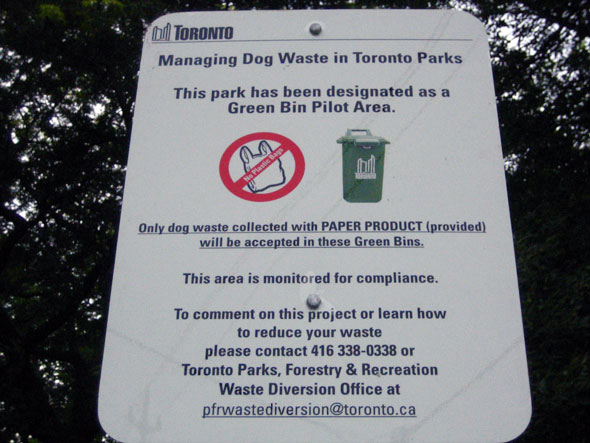 Why not find some way to work with what dog owners who are already using biodegradable bags? Make them identifiable from regular plastic maybe? When I dropped off my poop-in-a-paper bag in the park, there were biodegradable bags already in the bin anyway.

If only all dogs could be like the practical and environmentally friendly Tilda. She's a British bulldog I met on a walk with Ponyboy. Tilda exclusively number twos on newspaper. Her owner puts the paper flat on the grass, Tilda does her business and the paper is thrown out. No plastic, no awkward pick-ups.

But, until all our dogs are like Tilda the city has to think of a better solution.