I'm not sure if Ed Begley Jr is better known at this point for his acting or his conservation crusade, but there's no doubt he lends a certain sort of star power to any "green" event. Such was the case Thursday in the preamble to the Green Living Show, as Begley played a starring role in the Energy Conservation Leadership Summit and then hosted the Green Toronto Awards.

But while business and civic leaders gathered to congratulate each other and share conservation strategies, I was more interested in Begley's message of hope and to pick the low-hanging fruit first, a theme we didn't stray too far away from in our 15 minute chat.

Two things immediately struck me by the actor and green advocate. First, he's really tall. More importantly, Begley's approachability and engagement are infectious. We hadn't even sat down when Begley started asking how I was doing and started using my name repeatedly. Later it didn't surprise me one bit when he recognized a reporter and a couple other people he had met at least year's Green Living Show. 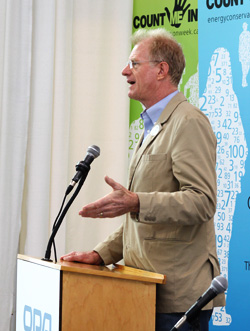 I moved the topic to today's event, which served as a kickoff for the upcoming Energy Conservation Week. Begley's role was to promote Ontario's strong stance on conservation, something he did passionately.

Ontario is "doing very well" Begley enthused, "[Ontario has] done a masterful job." I admit it hadn't occurred to me that somebody from California would be so enthusiastic about our fair province. But Begley couldn't stop talking about the rebates, incentives and programs Ontario offers for conservation, and I realized he's not so far off base.

Topping Begley's action item list (and the event's 100 conservation tips) is a home energy audit. After shooting a reality style show with his less-than-eco-minded wife and writing a book of conservation tips, Begley had an energy audit done of his own home, something he had first done 20 years earlier. He was expecting to receive top marks, since he had put in all the right insulation, windows and so on to make his home as efficient as possible. Turns out he only did "ok," and found significant areas to improve.

"I cut my natural gas and electric bills in half," Begley boasts proudly, and considering his starting point, I can only imagine the opportunity for savings in most of Toronto's aging homes.

I mused about how to get our grandparents on the conservation bandwagon, to which Begley readily admitted "that's the challenge." The problem as he sees it is a "perception of plenty," but it's not something that slows him down. "Educating youth is important," he says, "but we've got to get every age range on board." And Begley sees that as his mission now, appealing to every audience.

"It depends on how you frame the message," Begley says, adding for example, "it's not about stopping drilling oil tomorrow, but what about moving towards a renewable future?" The advocate is full of these pearls of wisdom and has one success story after another up his sleeve. He finds that no matter how liberal or conservative an audience, he doesn't have to work to hard to find agreement and rally support: everybody wants cleaner air, less reliance on foreign oil and so on.

America spends "$500-700 billion on foreign oil" annually, Begley points out, "that's a lot of green capital." These messages go a long way to getting standing ovations in Plano, Texas.

When asked about the change in the Oval Office, he is quick to add that there's "no question" the change helps, but that more than anything, not having two big oil guys in charge sends such a different message about priorities. Begley never dwells on the negative very long, and won't spend his time condemning somebody when he could spend that time promoting another conservation strategy.

So it was a celebratory mood amongst the suits and Deputy Premier and Minister of Energy and Infrastructure George Smitherman delivered a rousing speech trumpeting Ontario's successes. But I was more taken by Begley's story of snagging the lowest hanging fruit first, building up over several decades the nearly off-grid existence he enjoys today.

Begley doesn't expect us to all end up off-grid, but he does want us all to take big steps. The nice thing, though, is he wants us to take steps we can afford and manage. Maybe it starts with a home energy audit, an electric car, new windows or insulation. Eventually it may be a solar water heater. Later it may even be solar electric, but all too often green advocates come across pushy and holier-than-thou. That just isn't Begley's style.

It's refreshing to hear that we can go green in big and meaningful ways, but within each of our individual means. And save real money at the same time.