In typical last minute style, I made a trip out to Home Depot to pick up a few things needed to put the final touches on the outdoor summer gazebo my brother and I built for my mother this morning (Happy Mother's Day!). I was pleasantly surprised to find that Toronto Hydro was there, giving away free clotheslines as part of their energy-saving promotion (a timely promotion that comes on the heels of a province-wide lifting of all municipal clothesline bans). I filled out the short survey, chatted briefly about CF light bulb recycling with the rep, and was on my way, free clothesline in hand.

As soon as I got back, I decided I'd suss out the backyard and find a place for it. I took it out of the box and marveled at how cheaply made it looked (what do you expect for free, right?). Anchoring the end to the fence, I pulled the line out of the retractable spindle to see just how much length I had to play with. It was surprisingly long and I quickly found my end anchor point on the house.

I walked toward the spool to retract the line so I could work on anchoring the end hook to the house, and part way in, it stopped retracting on a dime. I let go of the line and walked over to inspect the spool. It was a mess. The line had come out of the spool, and doubled back on itself to form a nasty tangle around the axis that the spindle spins on. I tried to take it on with gentle patience but failed. My fingers wouldn't fit into the casing and the spring loaded retracting action made it impossible to win. I decided I'd have to pry apart the casing a little to get at the tangle. This turned out to be a mistake - the free clothesline suffered an immediate death. 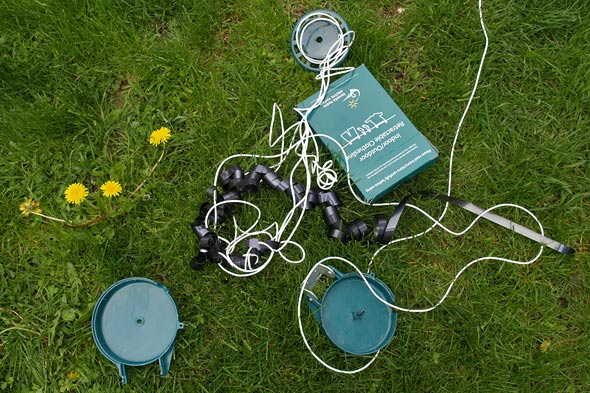 Before you all start jumping on me for being too rough with it, rest assured that this was only partly my fault. This thing is really shoddily manufactured, and I did follow the instructions by retracting slowly. Maybe I got a defective one, but I'm inclined to think that they're all junk. I'm willing to bet I'm not the only one to break their new free clothesline within a few minutes of taking it out of the box. I'm also expecting that anyone that uses theirs regularly runs the risk of breaking theirs within a short time.

I extend kudos to Toronto Hydro for attempting to help curb our local energy consumption problems by giving people incentive to air-dry laundry instead of using electricity. But I have to give them a disappointing wag of the finger for partnering with Promotion Works and sourcing really cheaply made clotheslines all the way from China. I now have a heap of plastic, rubber, and metal that traveled the world and is now spilled on the lawn and destined for the garbage/recycling instead of drying clothes. Sigh.