Earth Day brought back some of its good old environmental activism, as Toronto Climate Campaign and Streets Are For People staged a rally at Yonge-Dundas Square at noon today.

Over 300 people filled the public square that, ironically, is devoid of much greenery. They called on the Harper government to implement Kyoto, introduce mandatory emission reductions and support green energy.

What did you do to celebrate Earth Day? 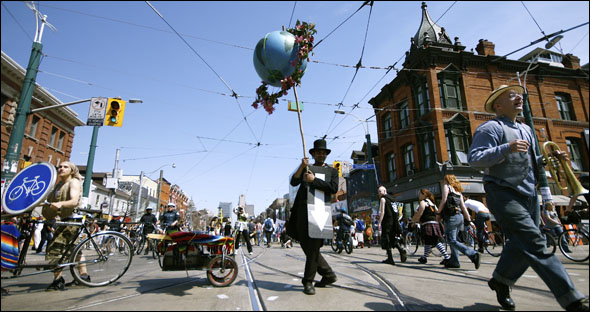 A spirited parade followed the rally, heading down Yonge St. to Queen St. and west along to Spadina, at which point they made a u-turn in the middle of the intersection, signifying the desire for a u-turn on climate change. 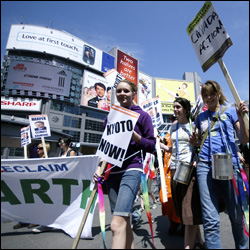 While some cyclists and pedestrians joined the parade and the cause, I caught a lot of bewildered motorists and passers by wondering what all the fuss was about. Is Earth Day that passe now?

The parade then headed back east to Queen and John St. where musicians played on and people continued to revel in the sunshine, as they got to reclaim the streets for pedestrians, even if for only a short time.

In the square I spotted a young woman sporting a "Don't Trash My Planet" slogan t-shirt picturing Oscar the Grouch coming out of his trash can (see photo on right).

Liz Oliver, 16, hopped on a Greyhound bus from Guelph, Ont. for the rally and march, along with her two friends Kali Robinson, 16 (in purple) and Meg Labrown, 17 (in blue).

They all picked up the necessary placards and noisemakers upon arrival at the square. 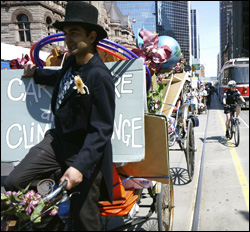 Near the front of the parade was Shamez Amlani, 38, riding what he calls his "five-wheeled beast of peace," a reconstructed India-style pedicab (photo on right) that he got from Parts Unknown, in Kensington.

The Petition Car joined the parade (see top photo) and was pushed along the parade route, which was a feat in itself.

It'll be interesting to see what's done in the year ahead with all this momentum from today.

After all, shouldn't Earth Day be every day?