Electronic bikes and alternative-fuel vehicles are some of the coolest things on display at The Green Living Show this weekend at The Direct Energy Centre at Exhibition Place.

We already know that Toronto is not so bike friendly. With the imminent arrival of EcoCabs coming to our city streets, our roadways will be even more congested. So what can you do?

With the rising cost of gas and growing congestion in the downtown core, motorists are left with few options. Ditch the car, forgo cab rides and long TTC wait times and consider an electronic bike, or e-bike. They're quiet, non-polluting and require no driver's license, insurance, plates or registration.

While I'll still pedal my traditional two-wheeler, I'm considering getting one of these e-bikes myself for longer commutes, or when I'm in a hurry to get somewhere and don't want to arrive all sweaty. Besides, they sure beat the waning hipster street cred of a Vespa.

More on e-bikes and a ticket giveaway to The Green Living Show after the jump.... 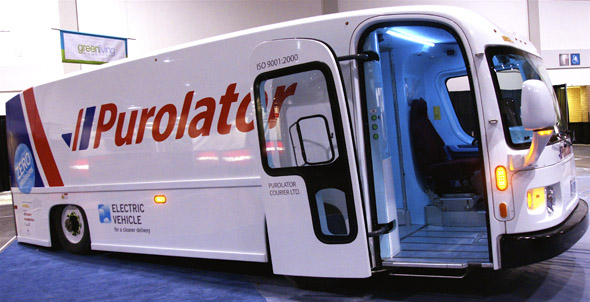 This year's exhibitors at The Green Living Show include some exciting options in the transportation field. Aside from the the e-bike smart scooters, there's the new all-electric Purolator Quicksider delivery truck, made by Toronto-based Unicell, and the educational National Outdoor Leadership School (NOLS) bus, which runs on recycled vegetable oil.

The Quicksider can travel up to 150 km on a single charge. "It's set up to charge overnight so that it can get a 10-hour shift, just like our regular Purolator trucks," said Chris Derbecker, Unicell spokesman. 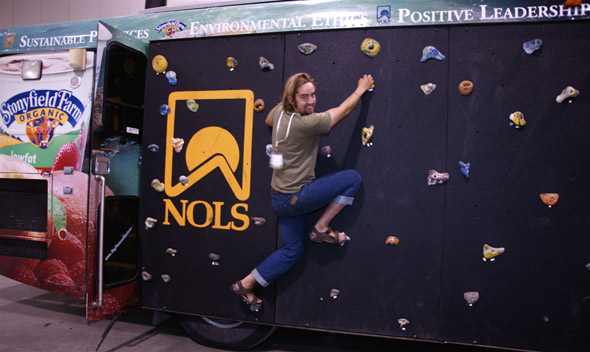 The NOLS bus is a touring educational bus that runs on recycled vegetable oil used by a restaurant for cooking. It's also a fun little climbing gym built into the outside of the bus. Inside everything electronic, including the lights, fridges and stereo, are powered with solar panels.

"We talk to people about sustainability and environmental impact," says Andy Bassett, 26, a marketing representative with the Wyoming-based outdoor adventure school. "We educate people in the wilderness in 14 areas around the world.

"We teach leadership skills and environmental ethics as well as technical skills such as backpacking, rock climbing and kayaking." NOLS is one of the founding partners of Leave No Trace. 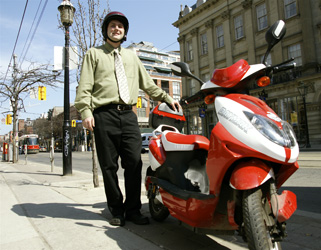 Larry "Dewdad" Dawidowitz, president of Dewdad Inc., is showcasing e-bike smart scooters (pictured in photo at top of story) which are classified similar to bicycles on Ontario roadways since a three-year pilot program was launched in early October, 2006.

"The bikes have a top speed of 32 km/hr and can travel up to 80 km on a single charge," says Dawidowitz.

"I sold an e-bike to a 65-year-old woman named Noreen, who had a pin in her hip and had to walk eight blocks in pain before getting one of these."

Dewdad is one of several companies offering e-bikes at the show. Others include Daymak and Blue Avenue.

I first encountered this cool means of transportation on Monday when I met Jason Krauskopf (pictured right) about to get on his shiny red-and-white bike which I first mistook for a gas-powered scooter parked on Queen St. E.

Krauskopf, 29, has been riding his $1300 e-bike to work every day since February. "It's governed to 32km per hour (in Ontario) so windchill's not a factor," says Krauskopf. "I get 50km on a charge, which uses one kilowatt-hour or 15 cents of electricity."

"Technically, it's a power-assisted bicycle," says Krauskopf. "I beat most cars in traffic, driving from High Park to Queen and Jarvis in about 20 minutes. It's got plenty of storage too. I can fit eight 'tall-boys' under the seat."

You can find out more about e-bikes and learn how to lighten your environmental footprint while picking up earth-friendly tips and inspiration while saving some cash all weekend at The Green Living Show, Toronto's first consumer show dedicated to environmental information, products and services, which features more than 400 exhibitors.

The first five people to comment with the words "green" and "e-bike" in a single sentence win a free double pass to the show. Use a valid email address so we can contact you if you win.