Films For The Environmentally Aware

There are a couple new environmental film screening series starting up that might pique your interest, if you're into, you know, saving the planet and what not.

Tonight, National Film Board Mediatheque and the Canadian Institute for Environmental Law and Policy present this month's Green Screen event, a showing of Crapshoots - The Gamble With Our Wastes.

'Pegger director Jeff McKay traveled the world wide to record images and learn about the various sewage systems in place, posing the question, "Billions of litres of water- combined with unknown quantities of chemicals, solvents, heavy metals, human waste and food- where does it all go? And what does it do to us?" This film, created in 2003, offers a succinct look at the damage we're causing ourselves by "conveniently" flushing our waste down the drain.

The screening is free to attend, and begins at 7pm at the NFB. 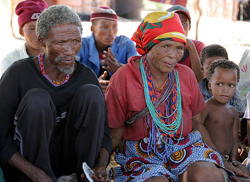 And this Friday, be sure to check out the first in a monthly series of re-screenings; Mixed Greens- the best of the best from last year's Planet In Focus film festival. This month features P is for Papaya by Aube Giroux and Bushman's Secret by Rehad Desai.

The first is a short film based around a romance, but really it's about the sour secrets beneath the skin of some popular tropical fruit. The second is a story of dispossession in the Kalahari, focusing on Jan van der Westhuizen, a fascinating Khomani San traditional healer.

Tickets are available on a PWYC basis, suggested donation is $7. The show starts at 6:45pm, at the Gardiner Museum.