Most Torontonians, posed the question, would opt to hold onto the beautiful piece of harbour landscape that is the Toronto islands. Frankly, most Torontonians wouldn't do anything but take for granted the notion that we've at least got this part of our waterfront sorted out properly, and it won't be going anywhere.

Sadly, this may not be the case.

Erosion can be a powerful force, anyone familiar with the Scarborough Bluffs is likely well aware of that, but it doesn't always need a dramatic cliffside drop-off with sudden "here one moment, gone the next" transitions to have a serious impact.

The Globe is reporting that wave-induced erosion of Toronto's islands, especially the sand dunes, is reaching a dangerous point and could very well be getting worse from here.

The erosion taking place is diminishing the rare island landscape at an estimated rate of 8 metres per year, exposing buried water and gas mains and causing trees to lose their footings and collapse into the lake. Up to a sixth of the park may disappear in the next century at current rates, and the situation may become even more urgent if faced with the wrong weather.

What makes this situation a little unusual is the apparent cause of the erosion, or rather what's making the erosion a problem: the Leslie Street Spit.

Previously, though waves would still have been gradually wearing away at the islands, the loose sand produced by the above-mentioned Scarborough Bluffs erosion would have been carried over by lake currents and compensated for what was lost.

However, we in Toronto have seen fit to dump kilometres and kilometres worth of construction site rubble into the atrocious waterfront wasteland that has come to be named, shamefully appropriately (although technically inaccurately), the Spit. 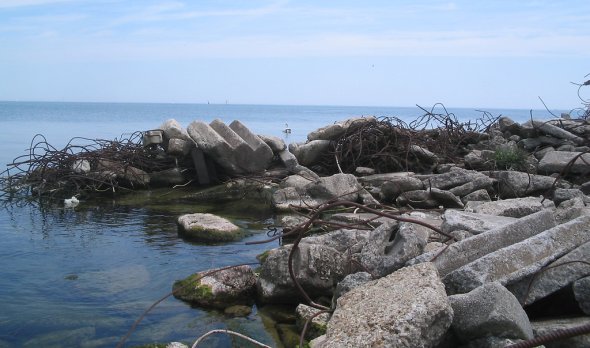 Nothing has ever made me less proud of my city than visiting this distressing urban mess, and that was strictly on aesthetic terms. Now it turns out that this strip of smashed concrete and twisted rebar has apparently been disrupting these island-nourishing currents.

It was bad enough that we couldn't recognize the Spit as a crime against nature in its own right, but the fact is that we're now finding ourselves in the situation of directly trading off some of our most beautiful and beloved naturalistic waterfront for one of the most horrible and monstrous blasphemies of manufactured landscape to be found anywhere in this area.

Of course, much as I might have disdain for the Spit, I do recognize that it has developed into something that has value as a piece of nature unto itself, and is important for a number of reasons, including its bird populations. So I wouldn't advocate ripping it all out and relocating it, even if that wasn't a near-impossible task.

Proposals for addressing the situation on the islands' side are being studied, and all options on the table at the moment are expensive and would take either several years or ongoing maintenance. These options include construction of various types of breakwalls, and regular replenishment of the sand with material brought in from other parts of the harbour.

Photos: Toronto Skyline and Island by News46 (from the blogTO Flickr pool) and Swan amongst the shrapnel by Chris Orbz.