A Chilling Story of Waste: Air Conditioning and Open Doors

It baffles me, in this day and age, that certain commercial outlets choose to blatantly waste power right in the face of consumers. Having an open door with an air conditioner running is a complete waste of energy, and it also places unnecessary strain on our maxed-out power grid. It's like that blast of cold air as I walk past the door is a punch in the face, saying 'We don't give a damn about how our store policies affect the environment'.

As a friend and I were cooling off on our balcony (relying on the nightly wind, the old-fashioned way), we decided to perform a survey of two adjacent neighbourhoods: The Annex and Bloor-Yorkville. What follows may come as no surprise, and though the numbers are crude, awareness is the best leverage for the savvy consumer.

We began by visiting the Annex last Thursday, on a day where the Ontario Independent Electricity System Operator's projected peak power consumption was 26,632 MW (links to PDF)--perilously close to last year's record peak of 27,005 MW. The maximum temperature was 34째C, and life had been pretty sweaty for a couple days. Around 5:00 PM, the projected peak, we did a quick walking tour with iced coffees from Aroma Espresso as our only cooling aid. I was hoping to spot some open doors, but we were hard-pressed to find any in the Annex. Between Bathurst and Brunswick on either side of Bloor, we found just one business with air conditioning and open doors. 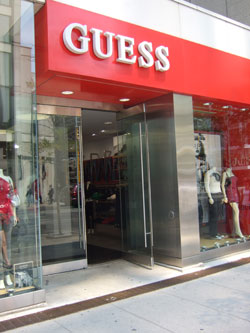 For the follow-up, I visited the Bloor-Yorkville shopping district earlier today. The conditions had changed somewhat for this half of the survey: the projected peak demand was only 20,967 MW (because of the civic holiday), but the temperature and humidity were similar. On the short stretch on Bloor between Avenue and Bay, I counted six stores generating a cold breeze out their front door. Meandering through Yorkville and then east past Bay on Bloor, I found another half-dozen stores recklessly bleeding cold air into the streets.

I only found a single store from each neighbourhood that had clear signs posted to indicate that their doors were closed to save energy (Roots in Bloor-Yorkville and Ten Thousand Villages in the Annex).

My findings, however limited in scope, lead me to the conclusion that certain big-name chains with lots of money (characterized by Bloor-Yorkville) only consider the energy waste as the cost of doing business by enticing customers to enter their stores. The smaller, independent stores (characterized by the Annex) are more conscious of their door policy, whether it's for the sake of keeping their electricity bill in check or for the environment.

What does this mean for consumers? If we all made a conscious choice to punish energy wasters by avoiding those specific stores, perhaps the message would get across. Until then, it looks like the retail corporations that can afford to waste energy and money will continue to do so without regard to its impact on our energy resources or the environment.