Sustainable City - The Most Ambitious Environmental Plan in North America

Motorists and potential homebuyers may have applauded City Council's decision on Monday to defer voting on new taxes, but all Torontonians should stand up and cheer the results of the vote that immediately followed. Shortly after deciding not to vote on new taxes, council unanimously approved a new plan to cut greenhouse gases by 6% by 2012, 30% by 2020, and a whopping 80% by 2050. The City is calling it the most ambitious environmental plan in North America, and rightfully so. Now all we have to do is hope the next 10 mayors can help make this a reality.

The tantalizing details after the jump.

First off, the city wants to set up a program called "Live Green Toronto" that will encourage individuals, residents' groups, and other neighbourhood organizations to take action in areas such as energy efficiency, renewable energy, local food production, water conservation, tree planting, green roofs, compact fluorescent, and the use of native plants. I like what I'm hearing! Let's just hope they can deliver the goods.

Next they want to create a "one window" source of information on environmental and energy-related programs hatched by all 3 levels of government as well as from communities and the private sector. This makes a lot sense as it can be quite difficult and confusing to research all the "green" program when they're coming from so many different places. Can't beat one-stop shopping!

Other eye-opening details include: doubling the amount of trees (from 17% to 34%), mandating that taxis and limousines shift their entire fleets to hybrid or low-emission vehicles, establishing a program to promote roof gardens, and expanding the bike lane/trail network from 300 km to 1,000 km.

Now what I want to know is, how did this not garner greater attention? More people need to start talking if there's any chance of reaching these lofty goals. 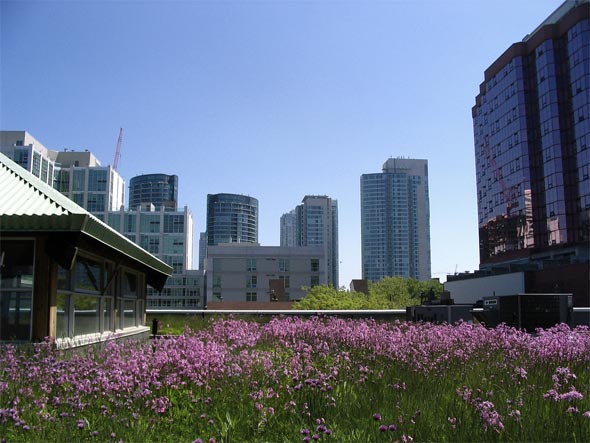 Sustainable City is a weekly column that explores current events and environmental issues in Toronto that impact the health and well being of urban city dwellers.