Last month I asked you all how you've coped with raccoons and green bins and was astounded by the wide range of your proposed solutions, from special clips to dog poop to harpoons to industrial grade bins.

"I find it helpful to my morale to think of the process in terms not of keeping raccoons out of the garbage, but rather breeding smarter raccoons for our squirrel overlords," says Toronto resident, John Chew.

Photos and tips beyond the jump...

John points out that if you keep your green bins in an insecure location ("raccoons can learn how to operate garage door openers, beware"), you need to do two things: "First, you need to keep the bins upright, because if they can be knocked over; a mature raccoon can jump up and down on it until the plastic breaks. We use a series of bungee cords for this, replacing them as the raccoons and squirrels gnaw through them. Second, you need to keep the lid shut. The clip straps are great for this; we haven't had any raccoon feedings since we installed them half a year ago." 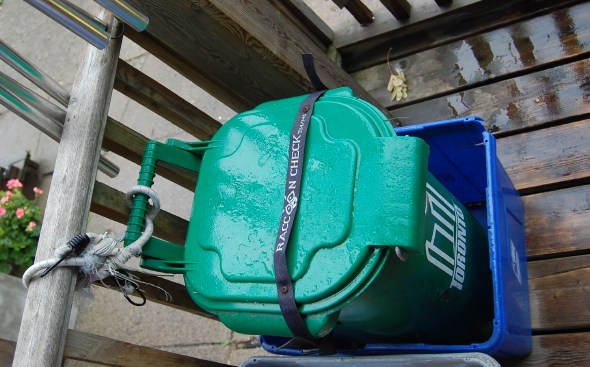 Photo above courtesy John Chew, who points out the salient features in the picture:

2. Bungee cord to prevent "knock it over and jump on it until it cracks" technique. Note that cord is almost chewed through and needs to be replaced.

3. Blue box is a red herring - we used to secure the blue box to the rail too, but now they think it doesn't move, so we don't have to. It's also handy for catching spills when the raccoons do get in, typically because the cleaning lady doesn't enable feature #1.

4. Metal raccoon chimes alert us to raccoon intruders, at least on a calm day."

One of the problems with the green bin is that the latch just doesn't keep out raccoons. I called the City Of Toronto Waste Management Services who said that for $9, you can buy an extra latch that should work. You can get them at recycling container pick-up locations and Community Environment Days (but not Home Hardware stores, sadly).

Several of you just keep your garbage and green bins inside, then take it out in the morning. Gloria, for example, says she keeps her garbage bins inside a stout shack. "It's not pretty, but no overspilled bins in a long time." 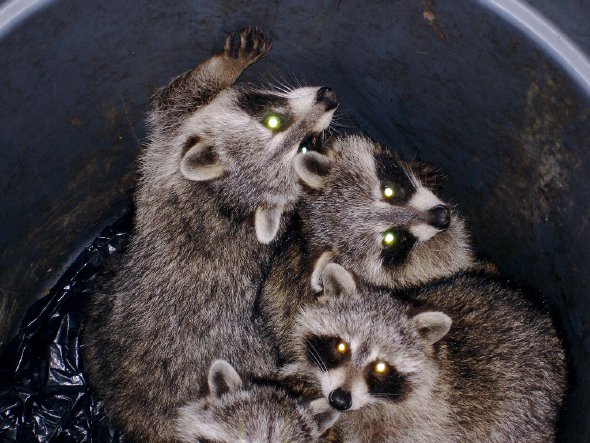 Scott hangs his green bin off two hooks on the back wall of the house and says this method works pretty well. "It's a different story when the bin hits the curb the night before and they get in and throw crap all over the sidewalk. That's the part I haven't figured out."

Like Scott, Graham hangs his green bin on the wall. "The raccoons still get in to dine on our food waste, after they dig through all the kitty litter, but they don't get knocked over making a mess. There might be some spillage once in a while or you might open the lid to find one feasting, but otherwise it works great."

Katie uses a buckle clip (the hard plastic clips that are used on backpacks, car seats, etc.) from Home Hardware, which she screws onto their green bin: one part on the lid, one part on the base. "We keep it clipped together until moments before the garbage truck pulls up. It works like a charm."

Arieh Singer puts a heavy recycling bin on top of the green bin, which keeps the raccoons from tipping the bin over.

Bob says he ended up getting a bin from Binsolutions.ca (4059 Chesswood Drive North York, ph: 416-849-2467, fax: 416-850-3204). The company has a wide variety of nice-looking bins of various sizes and types, if you're willing to shell out the bucks. I contacted Matthew Redman from Bin Solutions, who says they'll also be adding new products starting next year for those affected by the City of Toronto's new solid waste management system. 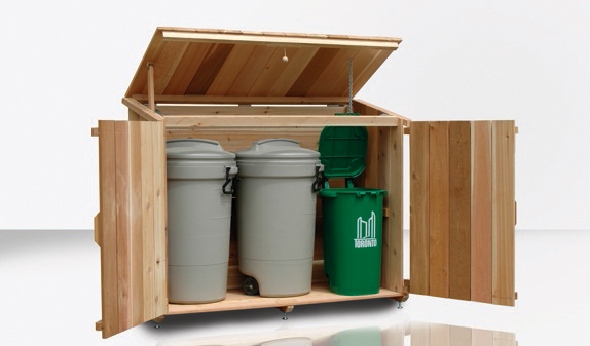 Tony has found an industrial-strength green bin. "The locking mechanism is extremely difficult to pry open (I usually have to pound on it with the ball of my hand to lock it) - they've knocked it over once or twice, but have never managed to get into it. For now, I am the victor!"

Caroline says that after trying bungee cords, pie plates, and motion-activated lights, she finally resorted to keeping all her garbage in a locked shed.

Dini's neighbours wedge their green bin under the deck stairs. Apparently they have trouble getting it out, though the raccoons seem to have no problem.

Mark Dowling suggests using a bungee cord wrapped from under the lid to the little notch at the base of the back of the bin.

Sheryl says that dog poop does the trick. "We used to have a raccoon party in our yard every night but they never touched the green bin, even when the lid wasn't secured. The reason - we disposed of our dog's crap in the bin as well (as is permitted under city by-laws) and the 'Rakkins' ('cause you've got to throw in a Trailer Park Boys reference every now and then) wouldn't go near the thing. Get a dog, borrow a dog, or leave the green bin at the curb an extra day, inviting local dog walkers to dispose of their stuff in your bin."

Steve M., however, says that dog poop is a very good repellent but it doesn't always work. "I used to bungee my bin to the railing at our back door and then just use the clasp to keep the lid sealed. As long as they couldn't knock over the bin, they couldn't pop the clasp." 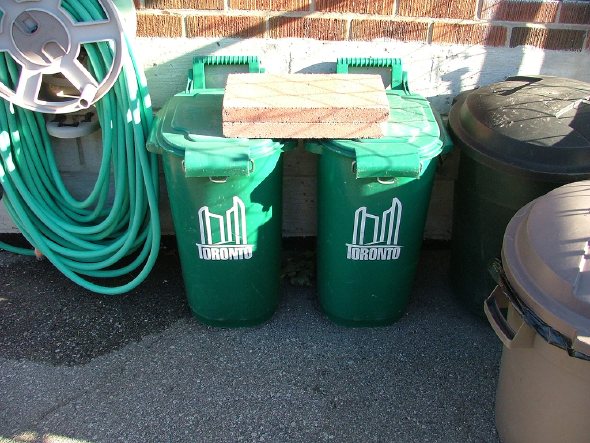 Some of you claim that the trick is the arrangement of bungee cords. From Jeremy: "I'm currently using bungees, and it's working great. The secret is in how you hook them up. :) I take a single stout one, about 4' in length. Fold it in half and insert the loop through the handle. Put both ends through the loop, and wrap around under the lip to connect to the latch at the front. Hasn't been defeated yet (fingers crossed). Now if I can just get the garbage guys not to show up when I'm in the shower..."

In addition to all your ideas, I found some helpful resources online:

Trash Talking: Raccoons find Green Bins are meals on wheels: This Toronto Sun article suggests using a special buckle-strap called Raccoon Check, available from Home Hardware for under $8. See photo by John Chew near the top of this post to see this in action.

How to keep Raccoons Out Of A Trash Can: from eHow.com.

Raccoons and Your Home: tips from the Toronto Humane Society. To the over-enthusiastic: please note that it's illegal to trap or poison wildlife.

Do you have a solution not listed above? Please do post it below!