I'm really happy to see that the big trend of 2007 (and hopefully beyond) appears to be environmentalism.

It seems like "green" is the theme of just about everything these days, and with every mayor in the Western world climbing over each other to prove their city the greenest, it didn't totally surprise me when Doors Open Toronto announced its enviro-theme this year.

One place I didn't expect to be spearheading new environmental initiatives was my old high school, but that's exactly what William Lyon Mackenzie is doing, thanks to the student-led SWITCH program.

SWITCH, which stands for "Solar and Wind Initiatives Towards Change," was started by Mackenzie student David Godri. The plan is to add solar panels to the roof and sides of the school, promote sustainability-conscious behaviour, and set an example for other schools to follow.

At first, the idea that my 1960s-built red brick high school would be implementing something like this surprised me, but in reality the idea makes so much sense that it leaves you wondering why it hasn't already happened. The design of pretty much every school in Toronto provides for a huge area of flat, sun-exposed roof space that is just begging for solar panels. 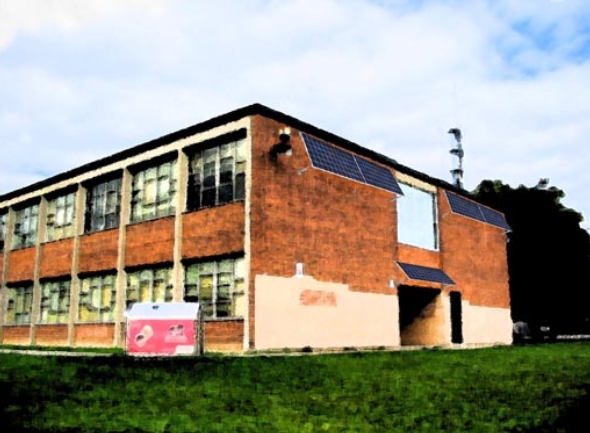 That's the only kicker, of course - begging for solar panels. They don't come cheap, even though once installed they immediately get to work paying off their debts. Hence why the image above is only an artist's impression of what the school will look like in a year once the panels are purchased.

Now, I had some pretty good years at that school, things occasionally got a bit zany and creative, but I'm kind of left feeling like I missed out on the really cool stuff when I compare the school then to now. Sure, we had artistic events take place, but they were never like this.

The SWITCH kids organized a concert fundraiser and invited students from around the city and province to join them at $15 a head. Both David Suzuki and Steven Page (of the Barenaked Ladies) made appearances, which totally beats whatever the coolest thing was in my time at the school... and beats it for a great cause, too!

Actual solar panels were temporarily installed for the event, free of charge, to demonstrate the viability of the idea. The board trustees in attendance were reportedly quite pleased with the whole thing, and started discussing how to get this whole thing put in place as soon as possible.

The current plan is that Mackenzie will be one of two TDSB renewable technology pilot projects, the other being Hillcrest Primary. Installation is targeted to begin this fall.

My hat goes off to David and Mac for being so cool and so progressively-minded, and I'm really glad to see that things are in a place where it can be this cool to be this responsible.