If you're a fan of mochi donuts, you can thank one particular business for bringing the Japanese treats to Toronto.

Isabella's Mochi Donuts credits themselves as "Canada’s first" mochi donut after couple Cecilia and David Noon opened the first version of the business in 2016, Isabella's Boutique Restaurant in the Beaches. 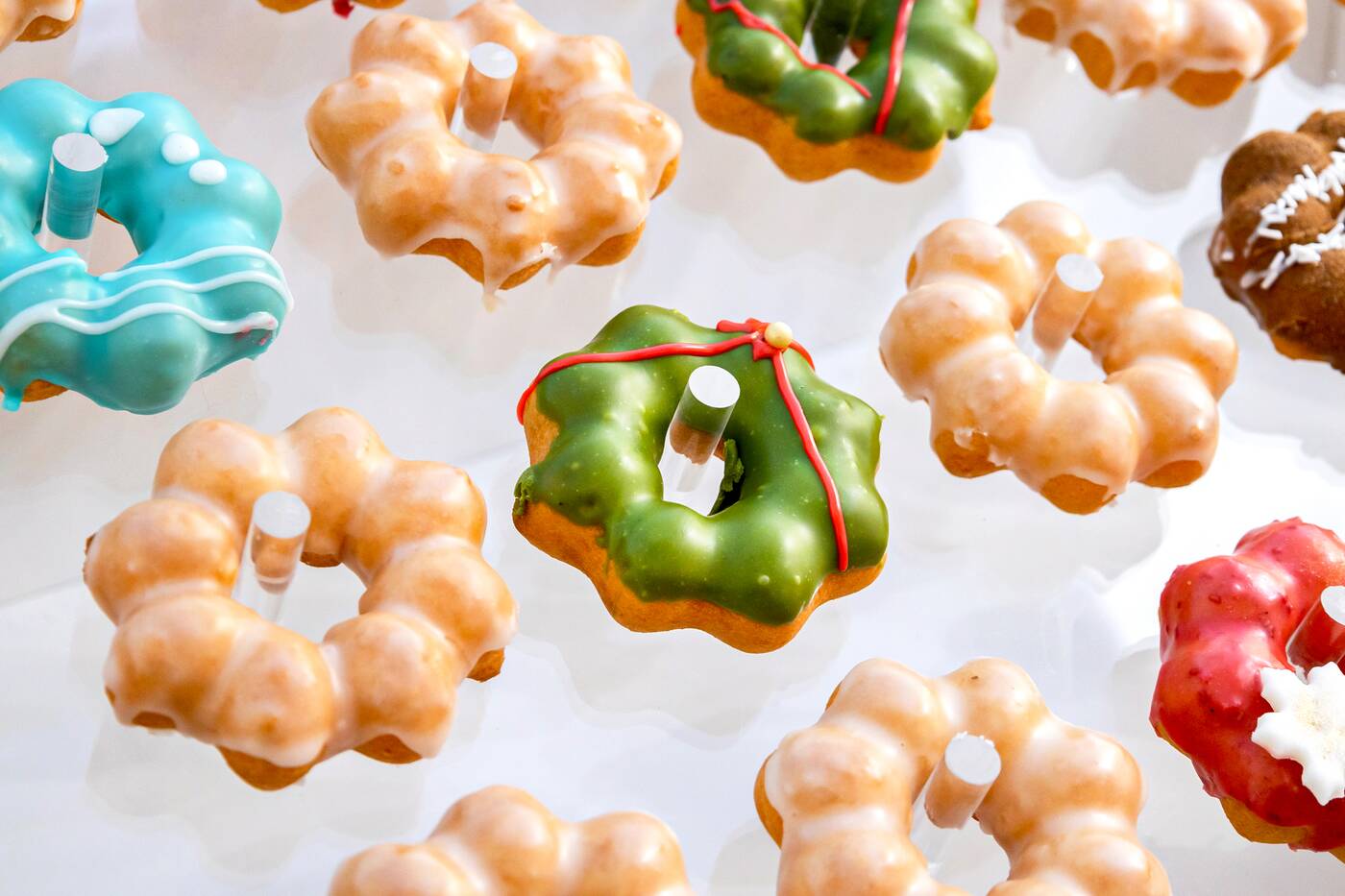 Isabella's has created over 400 flavours of mochi donuts since launching.

The couple met in Japan where Cecilia had been living for most of her life but moved to Canada to enroll their daughter, Isabella, in school.

Missing the home-style cooking of Japan, the Noons decided to open up a brunch restaurant serving classic curries, omurice and their star menu dish, mochi pancakes. 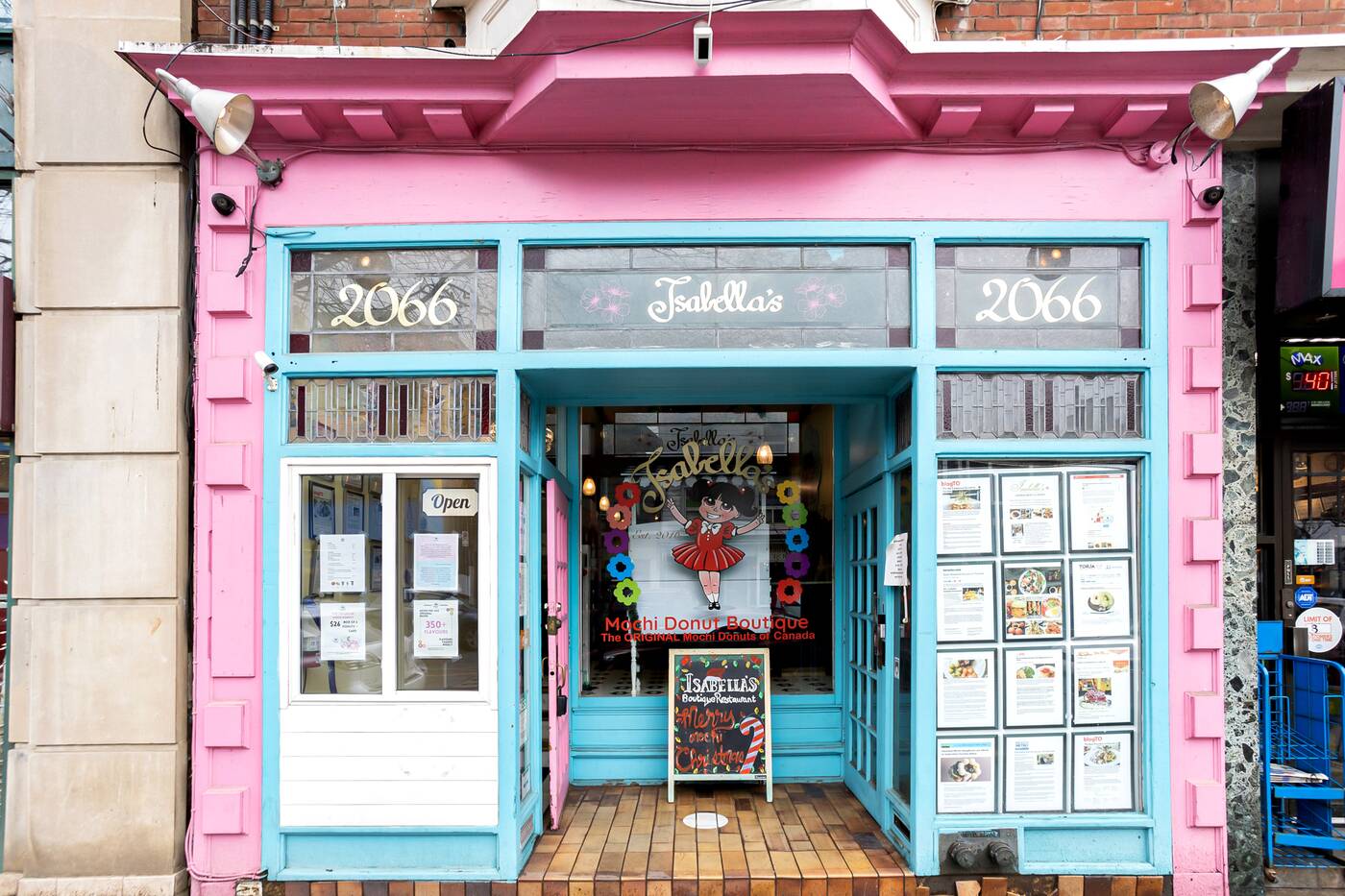 The store was only slightly dabbling in the mochi donut world, creating a few desserts to add to its Japanese baked goods section.

Back in those days, the donuts were produced by hand, which is evident from their slightly unusual shape.

Scroll back far enough on Isabella's Instagram profile and you'll see the very beginnings of the donut empire. 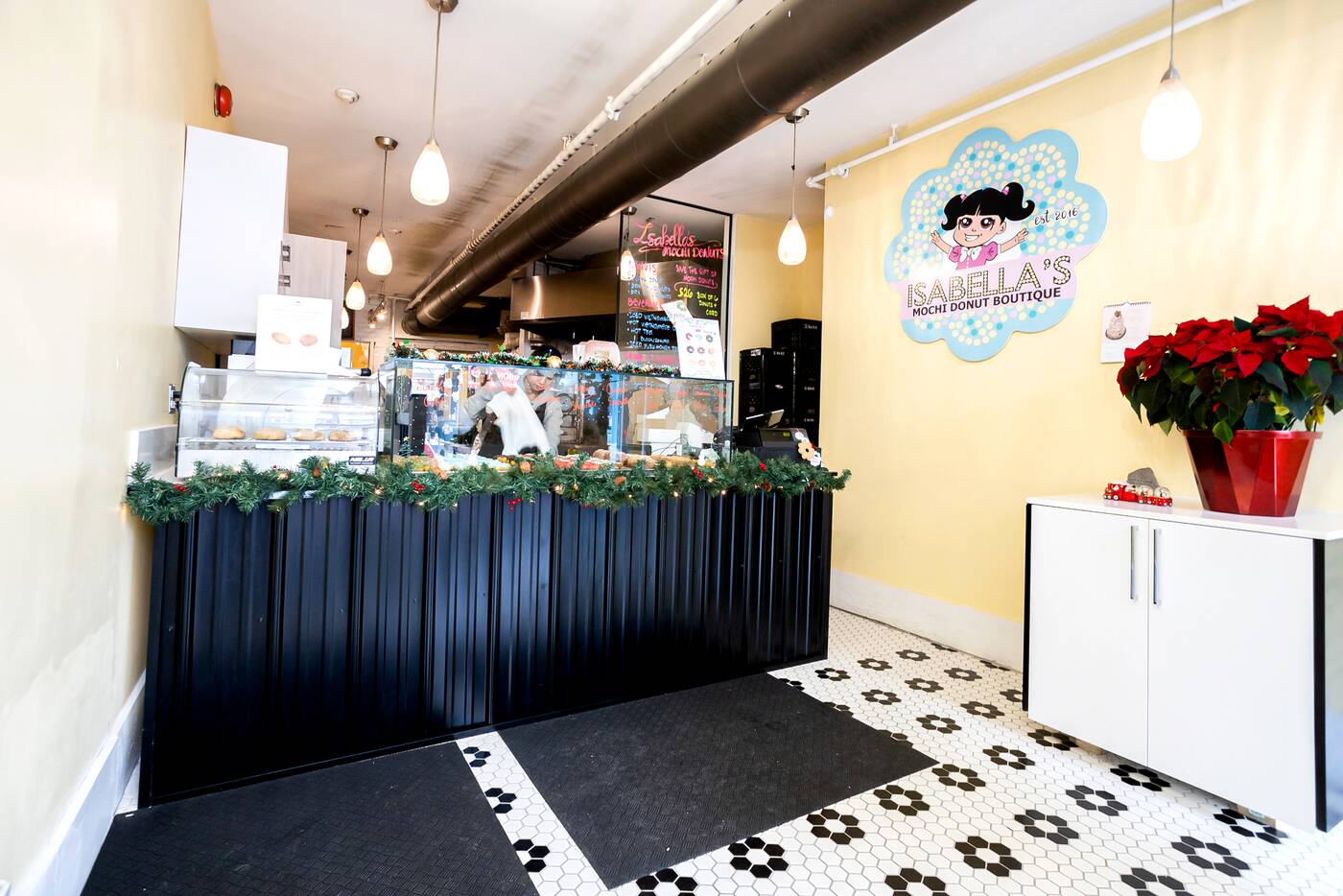 The flagship Isabella's Mochi Donut Boutique used to be the brunch restaurant.

But once the terrible year of 2020 arrived, Isabella's had to pivot to a take-out menu and just for fun, produced only mochi donuts for an entire weekend.

"It was crazy," said Cecilia.

The aha light bulb moment went off when the duo recognized they could launch the city's first-ever dedicated mochi donut shop.

"We realized this is what the city was missing and then we upgraded our machine and now, you know, we have 400 rotating flavours and we do make thousands of donuts a day for our four locations," said Cecilia. 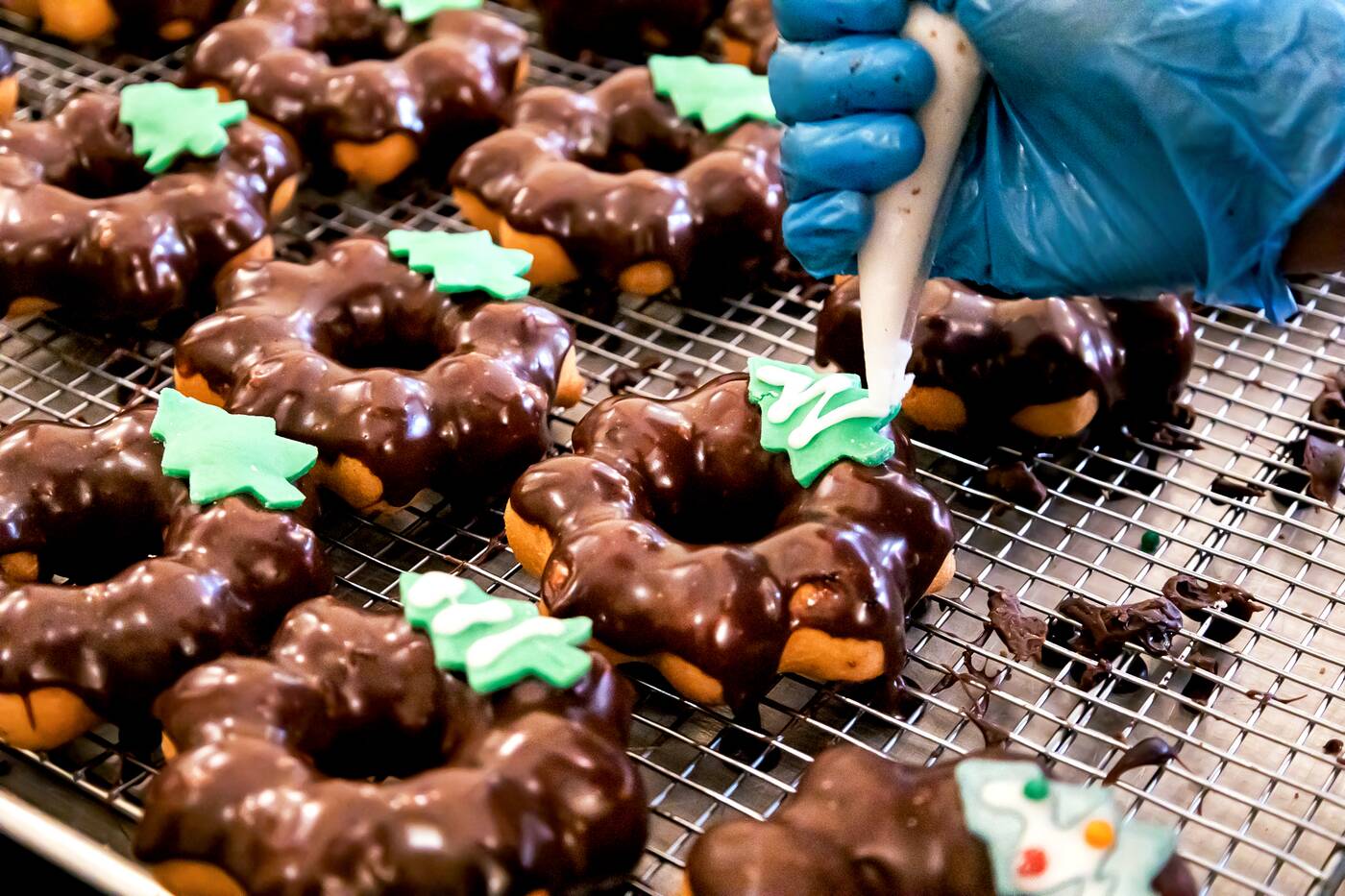 The original restaurant quickly transformed into Isabella's flagship, where donuts are baked daily for hour-long shifts. These new commercial-grade machines make it possible to pump out 50 donuts every five minutes.

From there the donuts are topped with flavours and adorned with sugar toppings, like tiny snowmen and snowflakes which are added by hand. Six donuts cost $25 or a single donut goes for $3.50. 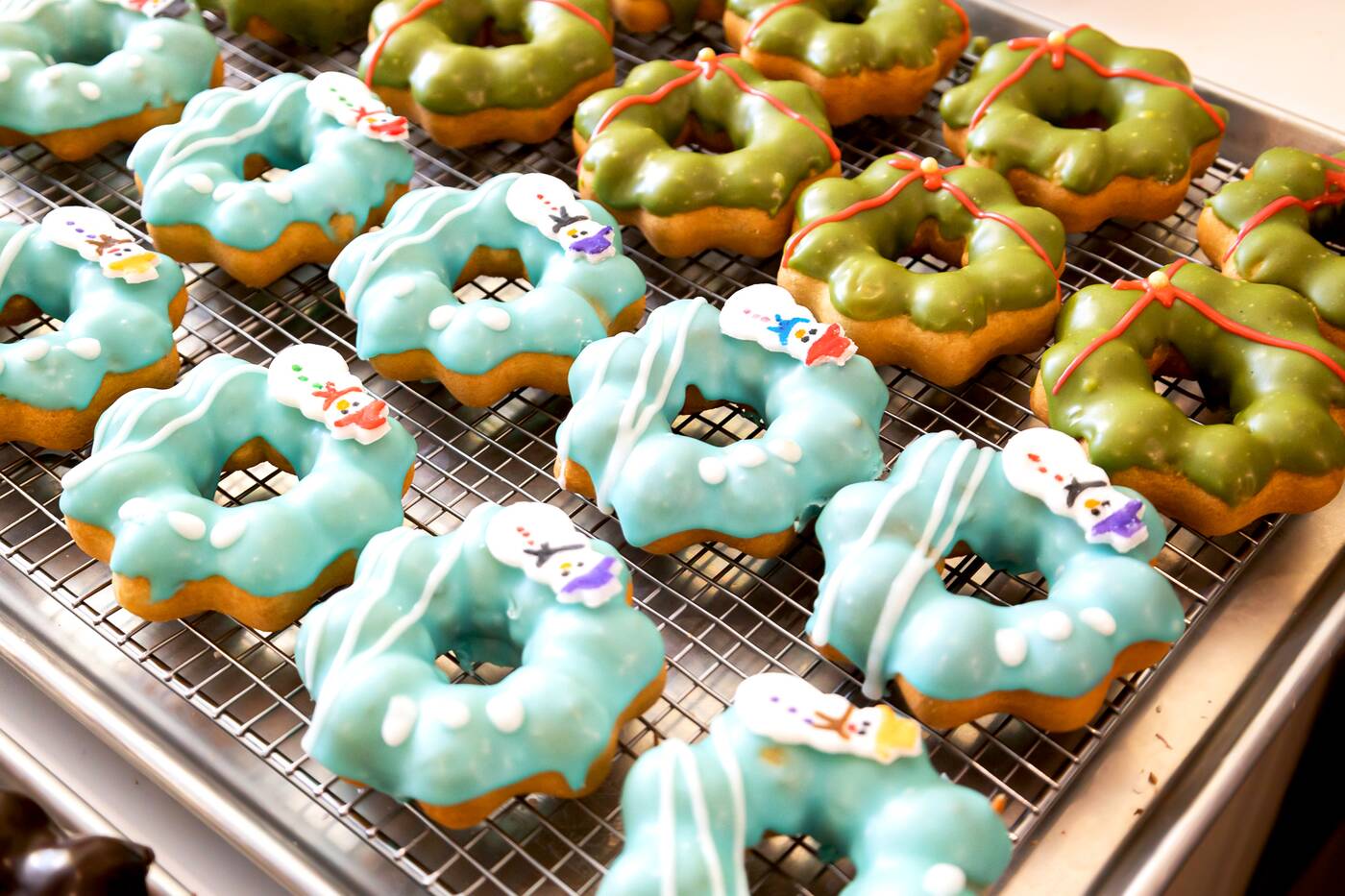 Snowman sugar decorations are made, decorated and placed by hand.

Besides being the first committed mochi donut shop, Cecilia prides her business on their dough recipe, which does not use any mochi pre-mixes.

"We are very proud to say that it's our very own recipe that took years to perfect. We don't rely on a mix that comes from different parts of the world," she said. 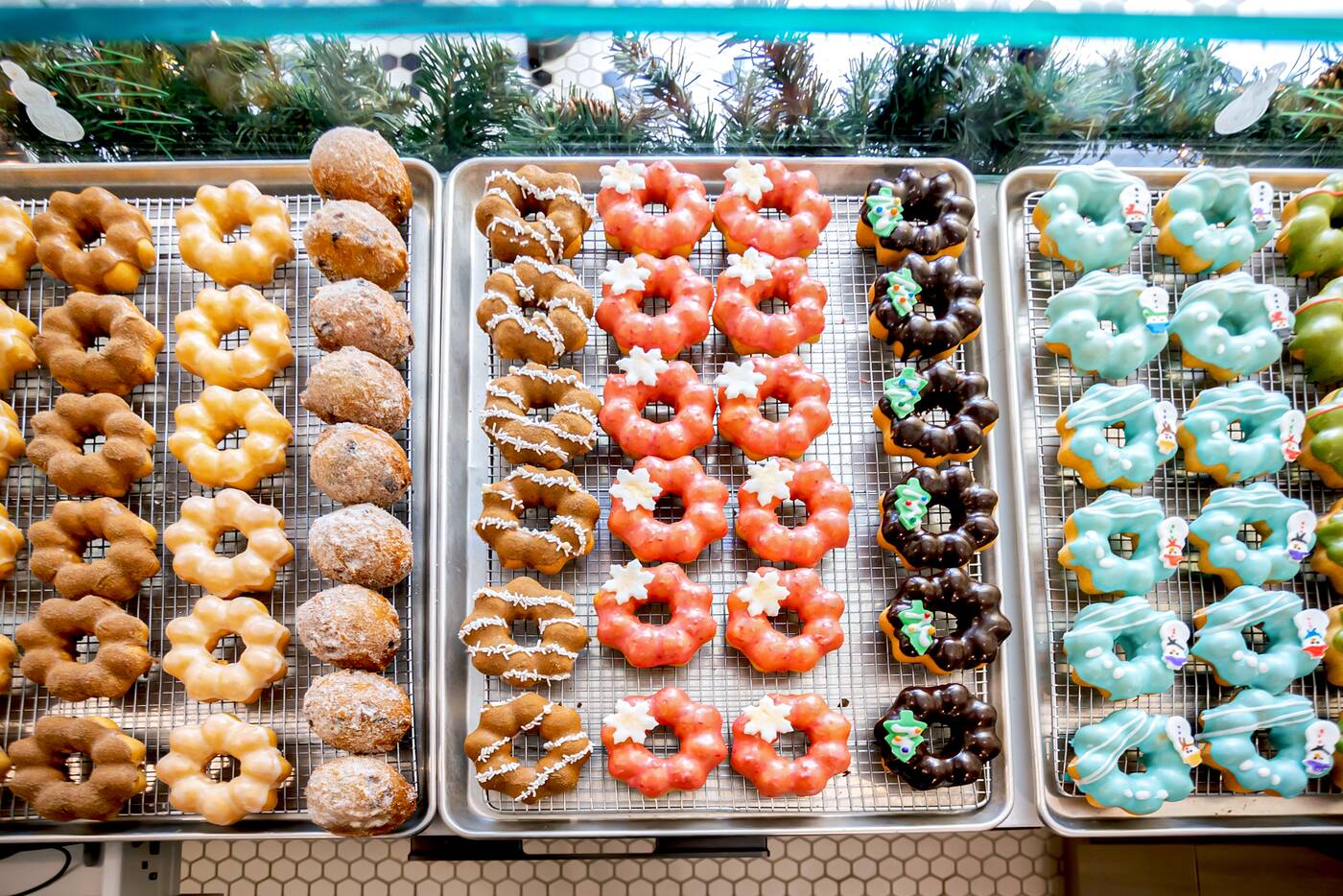 Isabella's makes their donuts freshly daily and shops are open 364 days a year.

This is a move that's practically unheard of in the business, with Cecilia comparing it to a bubble tea store and their boba production.

"They order their tapioca; they don't make it. So, for us, we really take pride in calling ourselves the original in the country because it took everything to perfect the recipe we have right now," she said.

Because the recipe does not have any yeast at all, it does not need to be proofed, but the temperature does impact the quality. This means Isabella's team has to be very careful with the batter to ensure it doesn’t get tough or lose moisture. 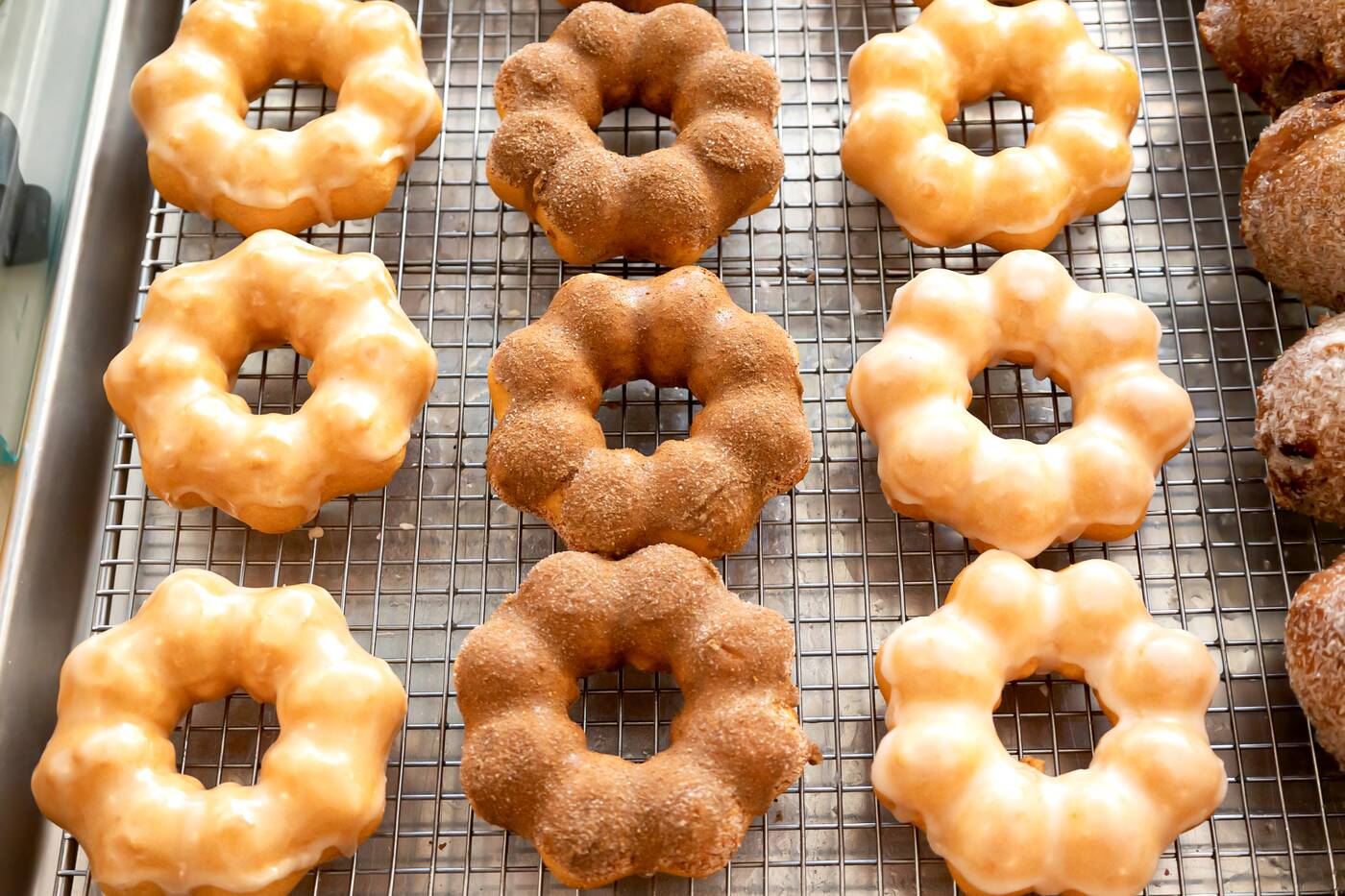 Since the dough is made with sticky rice flour, these donuts come out with a balanced crispy, chewy and pillowy texture.

Today, Isabella's is the largest mochi donut chain in the city and is the only shop that rotates its flavours on a weekly basis.

When asked about other mochi donut shops that opened up after Isabella's, Cecilia said her dough recipe can't be beaten. 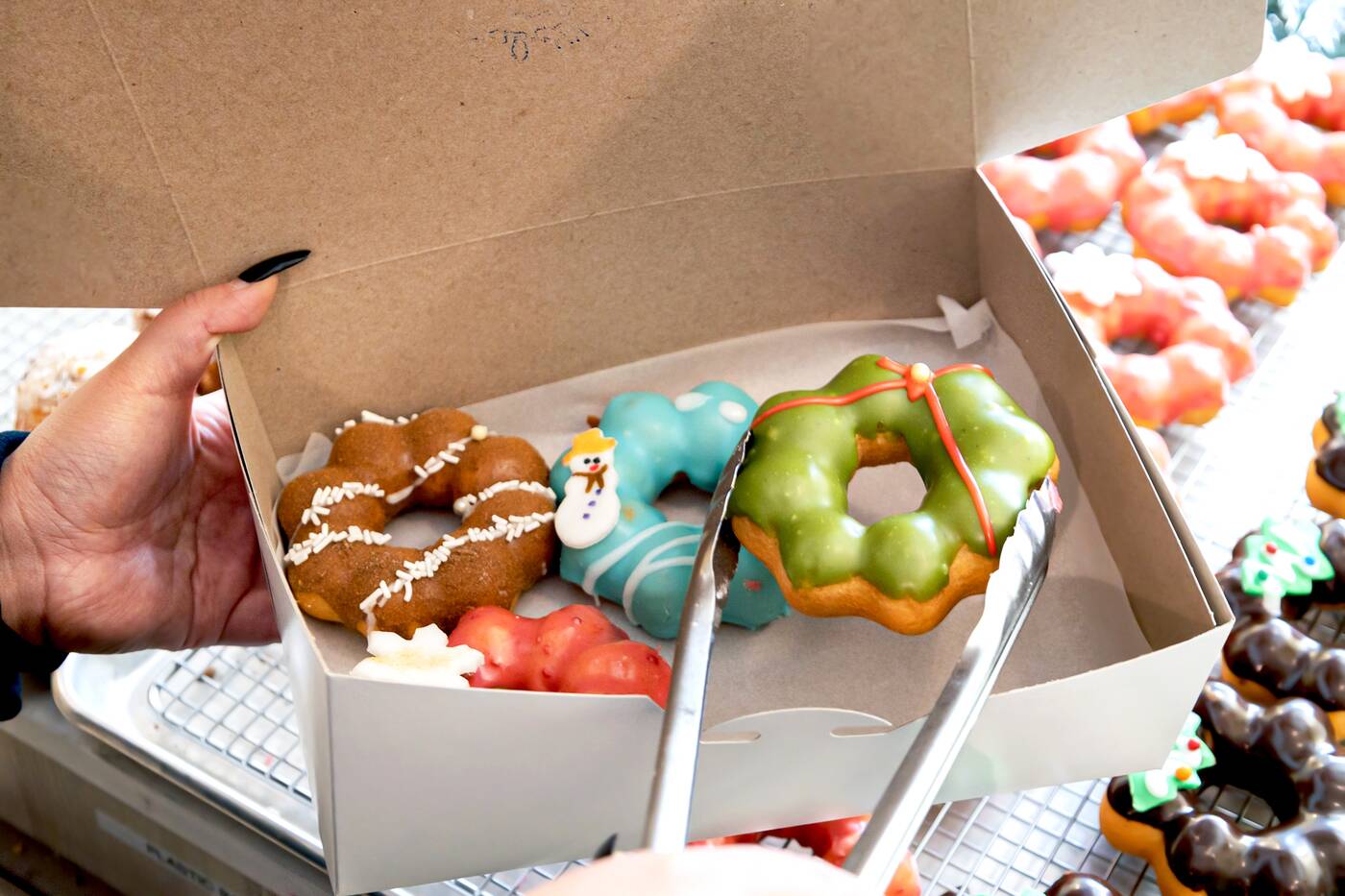 "I might be biased but, in my opinion, it's not the same and I know they use a pre-mix because why wouldn’t you say it's from your original recipe if it wasn't?"

Their recipe certainly proves that customers love it. The business baked and sold a whopping 300,350 donuts in 2021 and is on track to double that number by the end of the year.

Baking sessions happen every single day, with no option of using day-old donuts. Cecilia explains this is because the donuts become hard within 24 hours and as a result, unsellable. 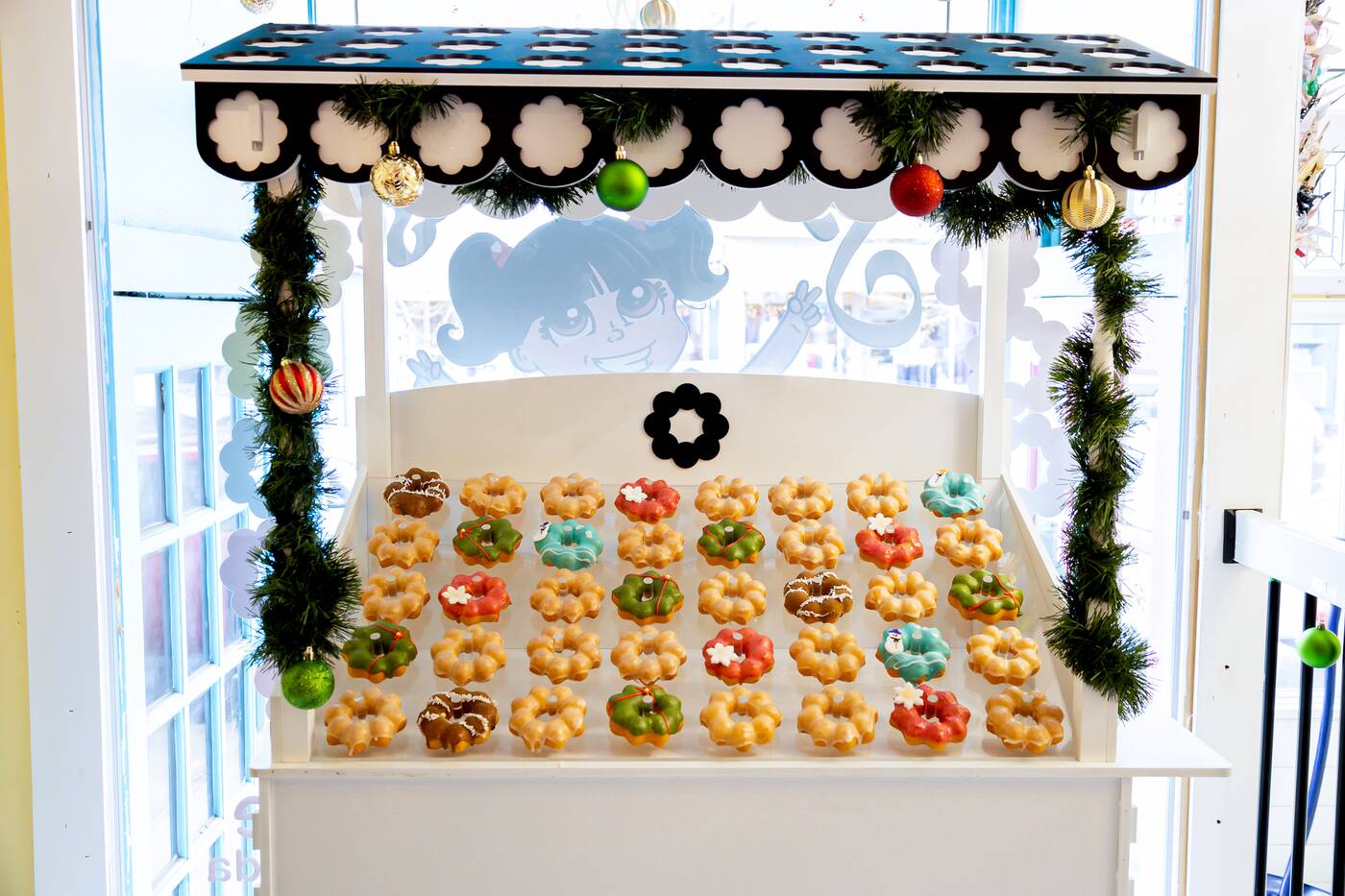 The most popular flavours are matcha, original glaze, tiramisu and black sesame but they also have unique tastes like banana-jackfruit, turon, Hong Kong milk tea and lychee rose.

As another year winds down and with plans to potentially expand into the west side of the city, Cecilia and her team reflect on the past 12 months with gratitude. 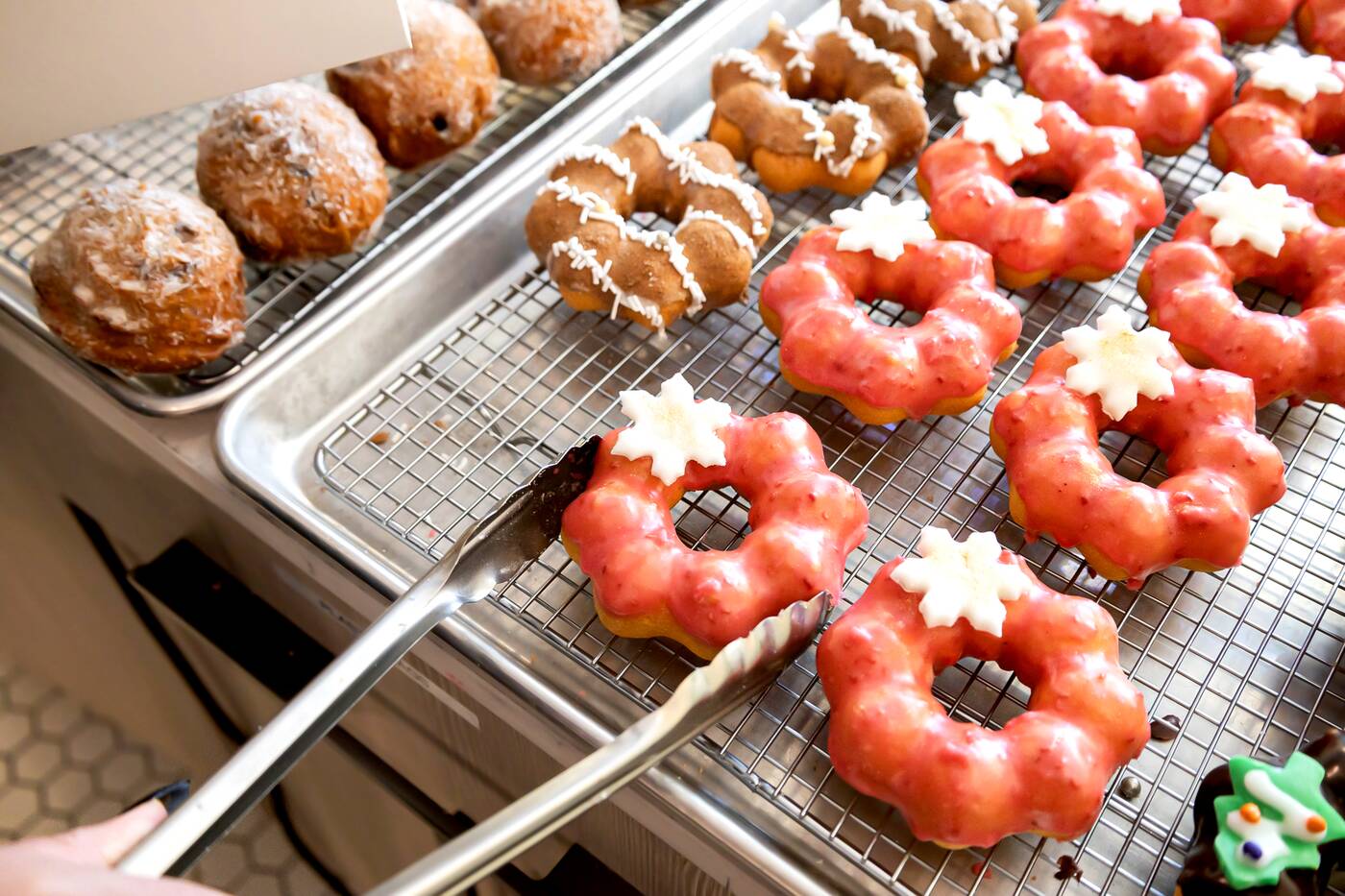 Raspberry snowflake donuts are made with raspberry puree and edible gold.

"We are a specialty mochi donut store. We are 20 people working hard every day and we are really happy and thankful to be able to do it."