After more than a year-and-a-half of constant frustration, uncertainty and bending over backward just to stay alive, Ontario restaurant owners were finally given the green light on Monday to re-open their businesses at full capacity.

It's a milestone worth celebrating, and many local entrepreneurs have been doing just that — but not Sandi Stoyan of The Hungry Dragon in Oakville. She hasn't had the time.

Instead, on the very same day that restrictions lifted to their loosest point since March of 2020, Stoyan was busy cleaning up the aftermath of what insurance agents believe to have been a "tornado burst" — a freak, isolated windstorm that completely destroyed The Hungry Dragon's outdoor dining area while somehow leaving nearly everything else around it intact.

On the same day that Ontario expanded capacity limits for indoor dining, this happened to the patio at a restaurant in Oakville 😲 - 📹 The Hungry Dragon #Oakville #Ontario pic.twitter.com/pjB9vyEf69

CCTV footage shared to the restaurant's Facebook page this week shows how truly wild the incident was: In it, we see a massive, industrial-quality outdoor dining tent billowing slightly in the wind before it is lifted right up into the air, travelling 60 feet to land on its back (incidentally atop a car.)

As the 20-foot-by-40-foot tent rises, it carries with it all of the 20-pound sand bags that had been holding it down, as well as two brand new outdoor heaters. Somehow, most of the tables and chairs remain exactly where they are.

"I've never seen this happen. Starbucks next to us didn't even have a flutter on their umbrellas," Stoyan told blogTO, noting that the tent had been up for months. "The commercial patio heaters probably weigh at least 100 pounds and flew like little sticks."

Those just-purchased patio heaters are now toast — "jaunty little french beret mushrooms that don't work," says Stoyan, and the tent has been thrown out as well. 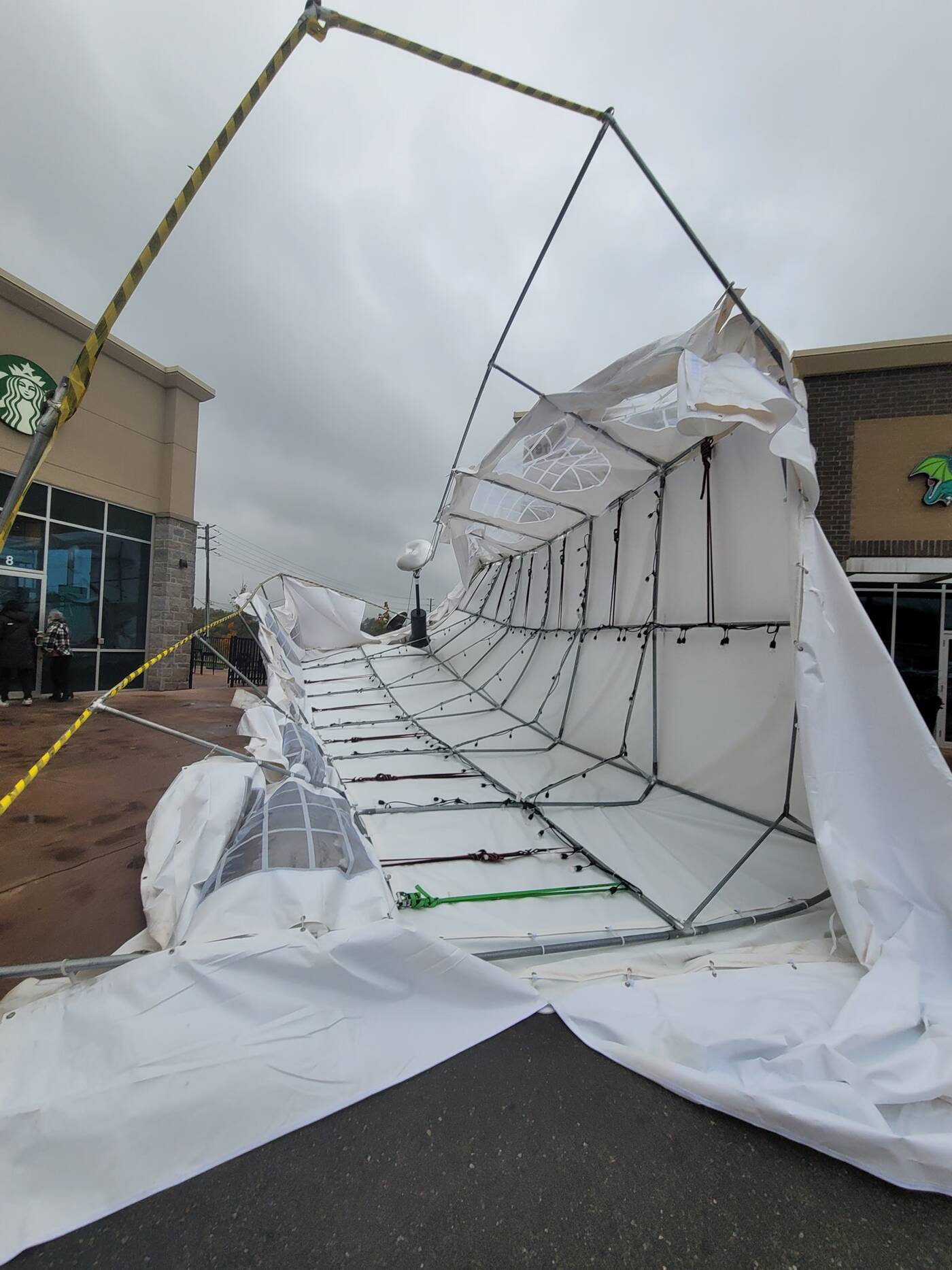 Fortunately, the restaurant was closed when the violent wind gust swept through early Monday and nobody was injured.

The Hungry Dragon is now open for indoor dining, takeout and delivery at 1911 Ironoak Way in Oakville, but the restaurant's owner says her patio is "gonezo alonzo."

While still a bit in shock by what happened and weary from yet another unexpected setback, Stoyan maintains a smile on her face and a sense of humour.

Says the restauranteur: "When did suburban Oakville become Kansas?"