A Mississauga shop has become home to a new secret source for donuts, and they keep selling out.

Four friends – Melanie Tom, Jonathan Lee, Andrea Moy-Lee and Justin Moy – took a leap of faith during the pandemic to open their own vegan donut shop.

Joughnuts Doughnuts is an online donut shop operating out of a catering company called Veggie Paradise.

“During the pandemic we had a lot of extra time on our hands," says Tom.

"Jon took up baking and cooking to pass the time and his vegan donuts became a hit with our family and friends. Eventually we got together and decided if we were ever going to take the leap into entrepreneurship, now would be the time to do it.” 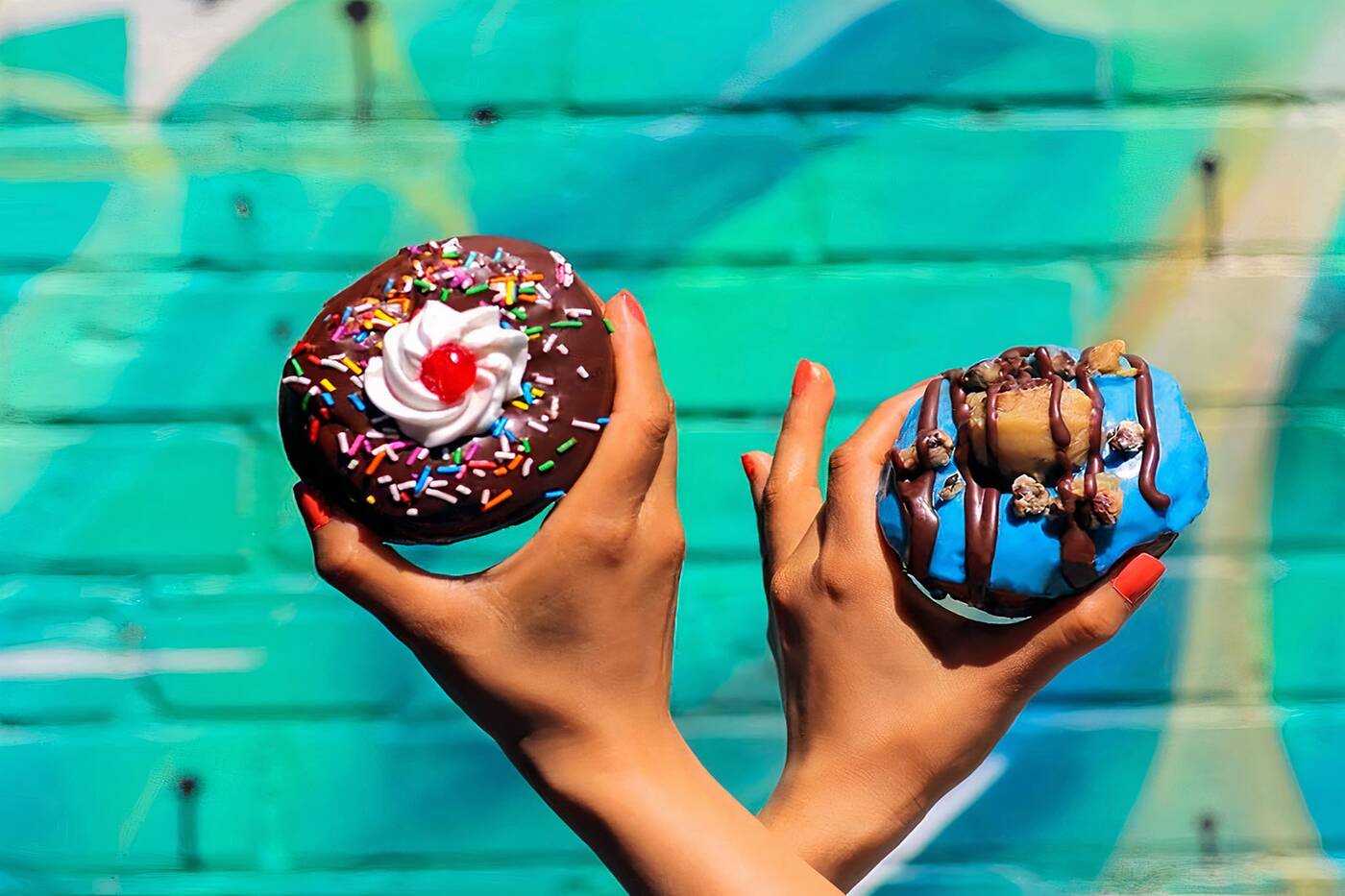 Lee’s aunt owns a catering company in Mississauga where the four friends kickstarted their donut venture.

There are six flavours available for purchase in a box every week. The flavours change weekly. 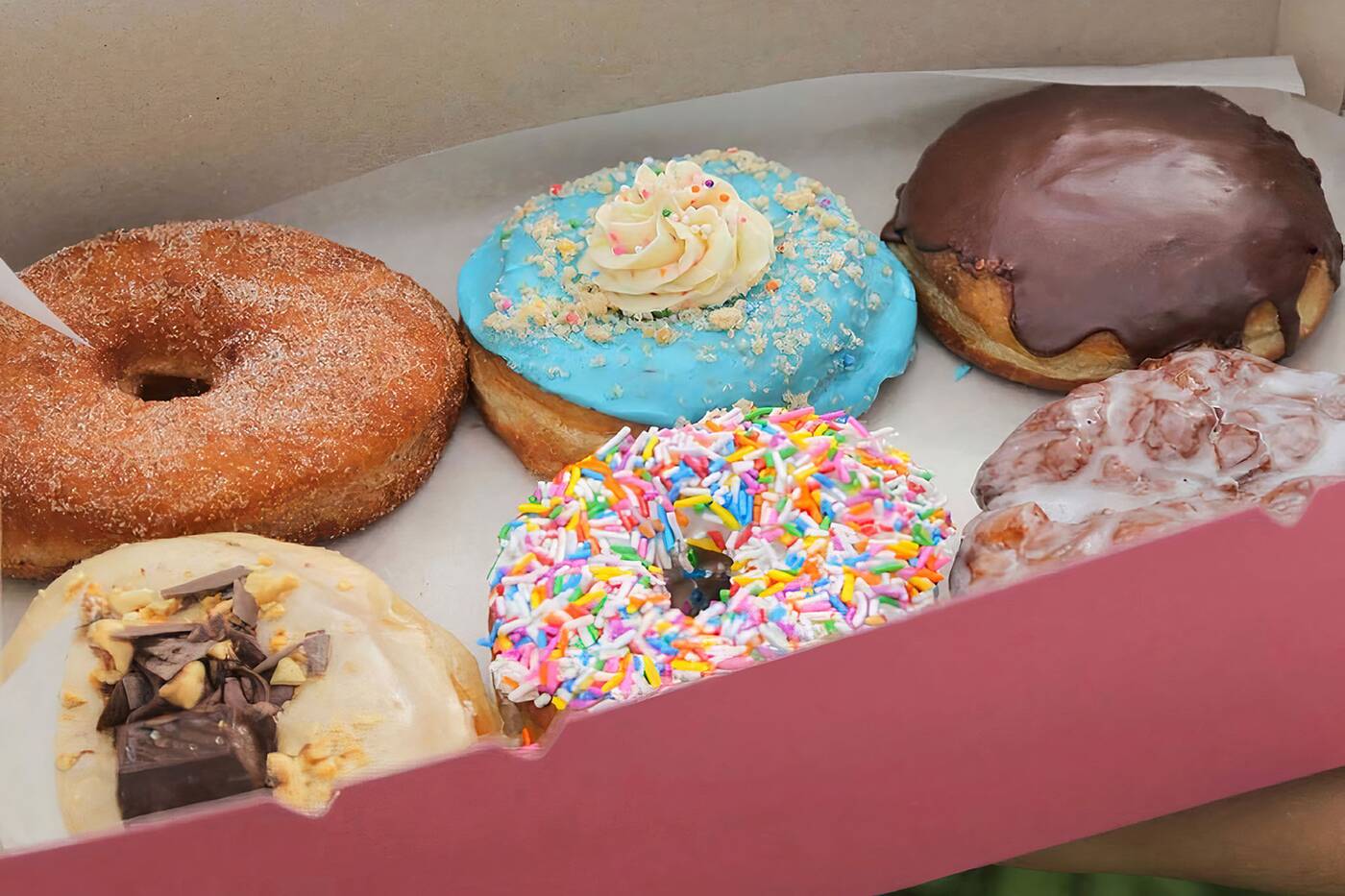 “Together, we have backgrounds in education, visual arts, design, and videography," Tom says. "We combined our skills to bring our company together. Everything from our flavour development, doughnut preparation, social media, and photography is done by the four of us."

Tom tells blogTO that when they started, they  thought they'd only sell a few boxes to friends and family, but they’ve grown way past their expectations. 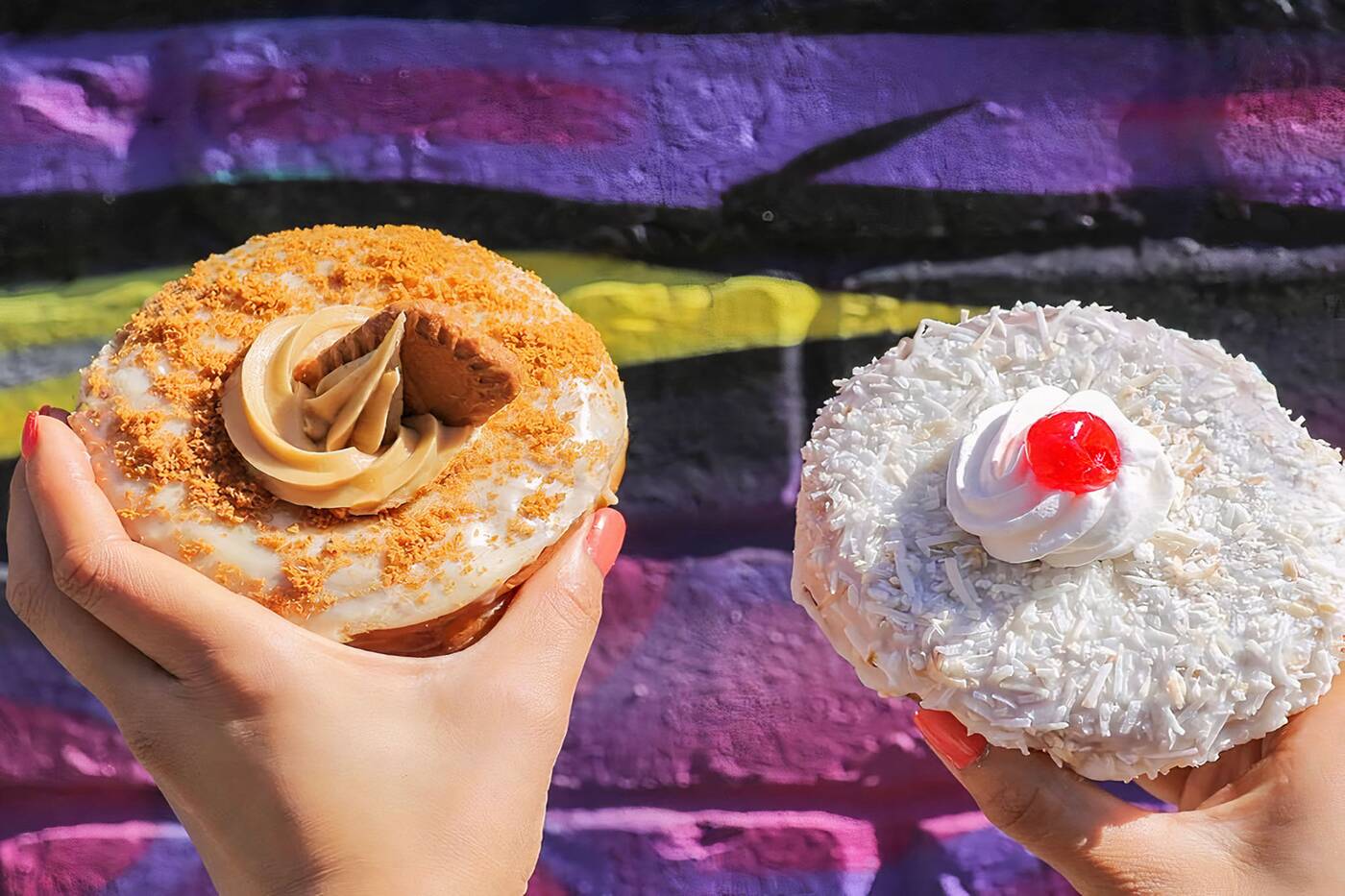 “Social media and word of mouth has really helped get our name out there," Tom says, "and it has helped us grow quickly. We’ve had to upgrade the equipment we were using to accommodate the increase in demand for our vegan doughnuts."

The Joughnuts Doughnuts logo mascots are based on Tom’s family pugs. Tom says the doggos are a fitting representation of Joughnuts because of their love for food, people and fun. 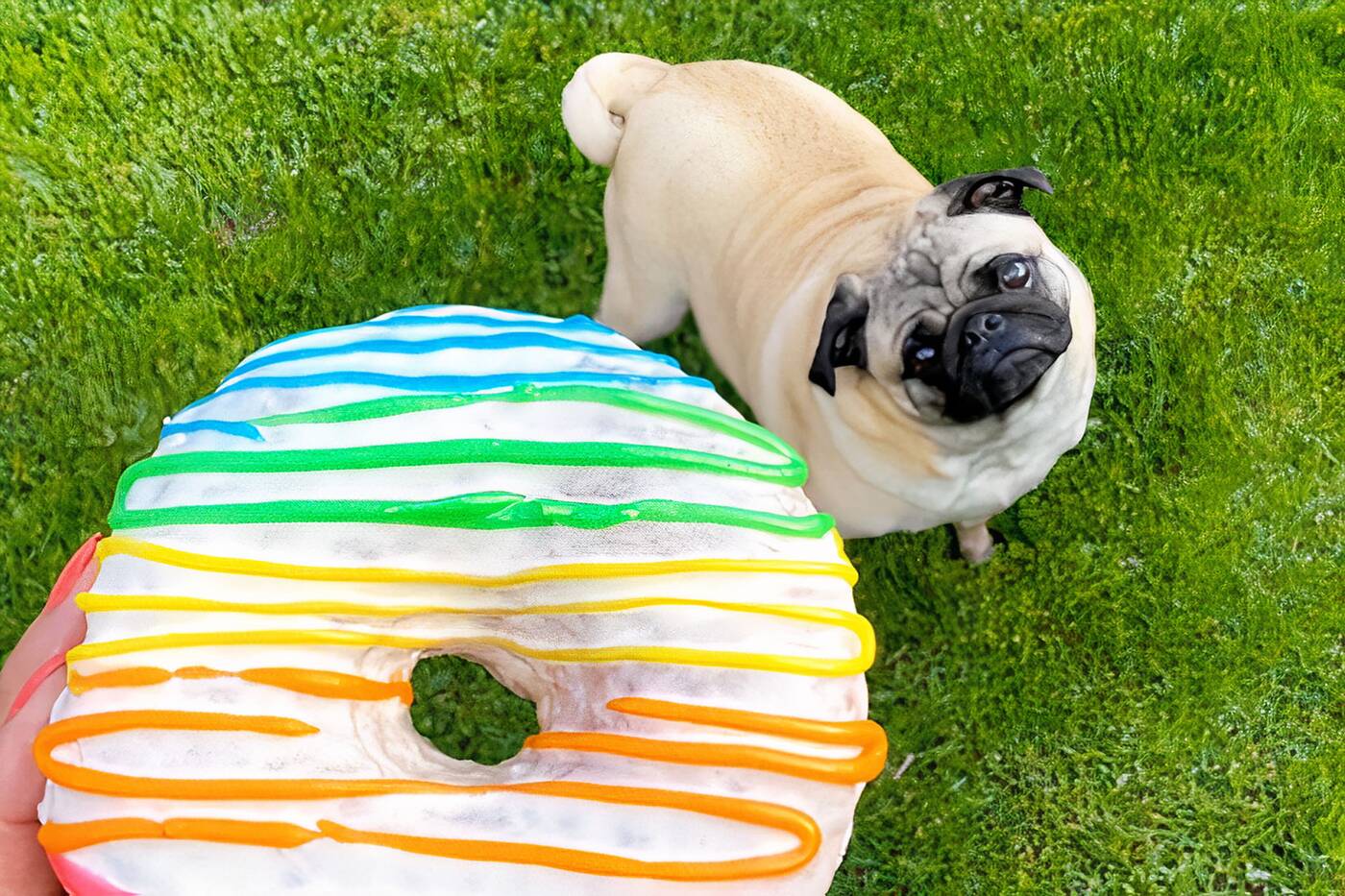 If you asked the Joughnuts Doughnuts team about customer favourites, they’d tell you about the apple fritter, an apple cinnamon blend coated in a sweet icing glaze. They say their cookie monster donut, Lotus Biscoff cookie and bueno hazelnut treats are booming right now. 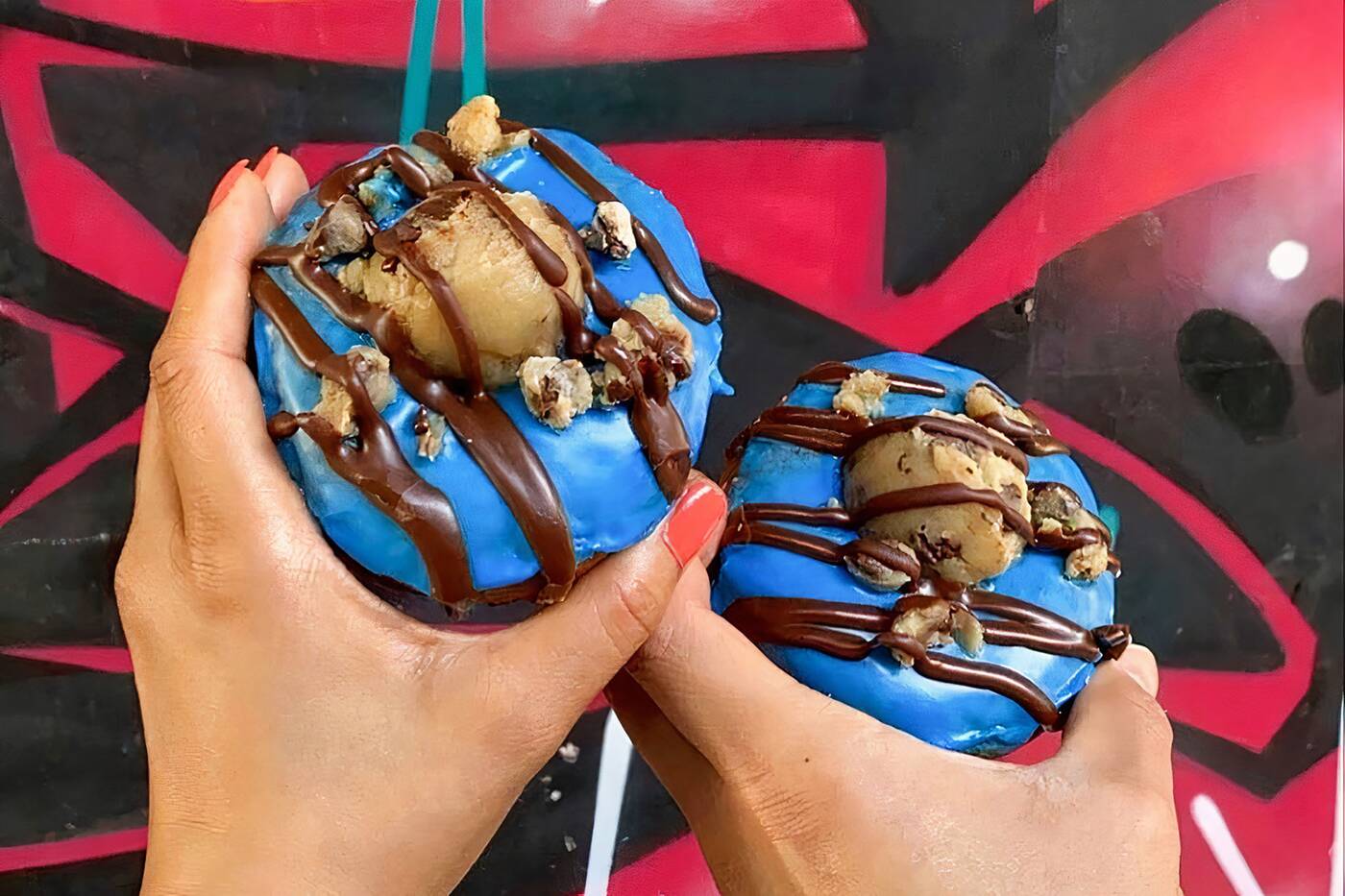 “Part of our business motto is sharing the dough (#sharehedough) with amazing causes we believe in," Tom says by email. "For the month of June, we’re donating a portion of our sales to Glo Farm Sanctuary and Egale Canada, in support of Pride month.”

If things continue going as well as they have been, they're hoping to open a permanent location.