Revitasize issued an apology via Instagram story after a Toronto nutritionist found that the calories of their zucchini muffins were over twice what they'd claimed among other miscalculations.

Nicole Inwentash was suspicious of the muffins' nutrition claims after noticing the high protein content compared to the listed calories, especially after she looked at the ingredients and saw the math didn't add up.

Inwentash tells blogTO that she had asked the Revitasize staff for a detailed breakdown of their recipe a number of times over the past year but never received an answer.

She says it wasn't until she posted her suspicions on social media and received hundreds of DMs from community members that one of the owners contacted her. After a discussion, the proper nutrition information was shared and an apology was posted to social media. 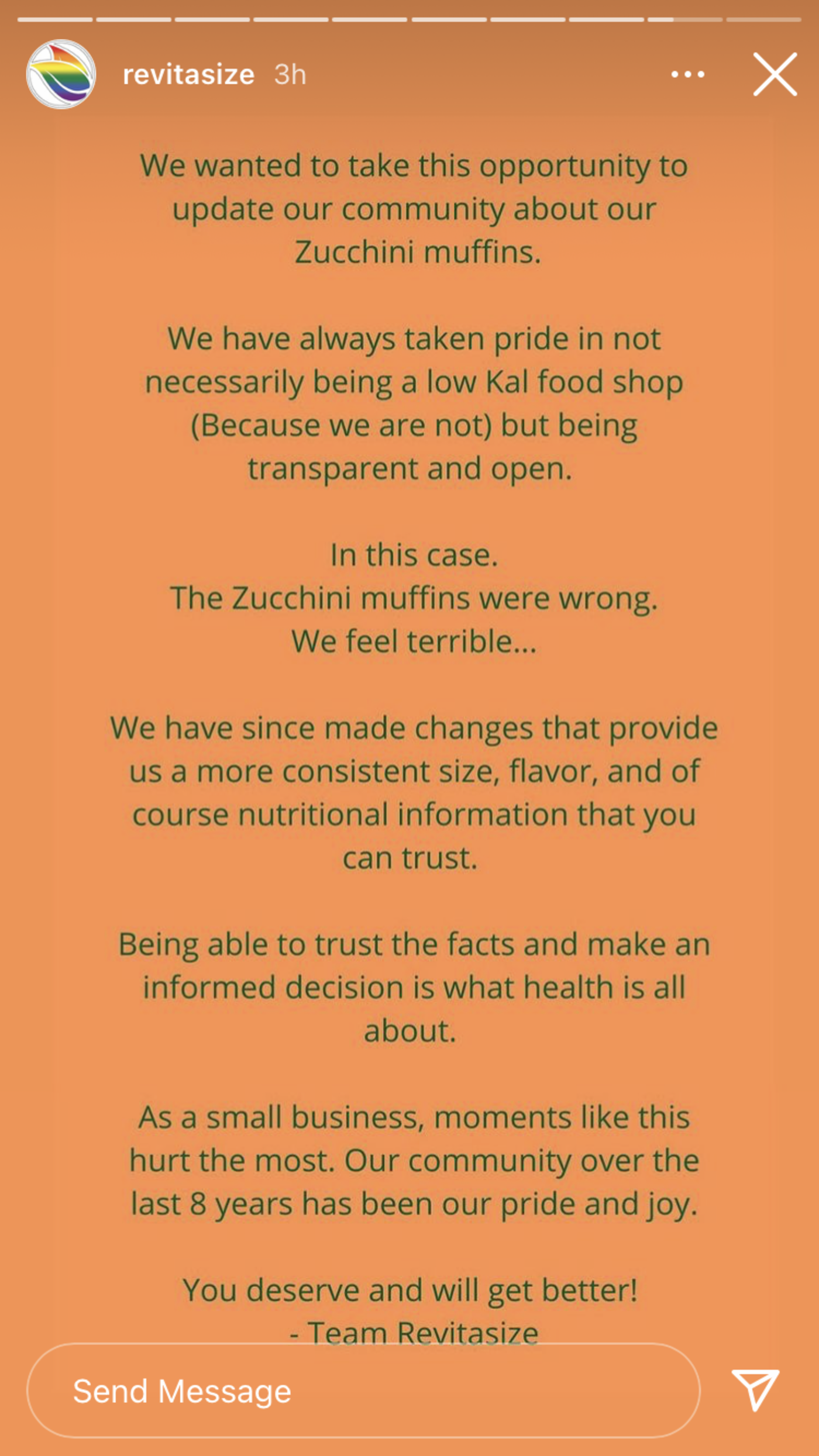 According to Revitasize, a small chain with locations in Thornhill, Yonge and Eglinton, and the Bay Adelaide Centre, the error came from the fact that nutritional information was calculated back when Revitasize was a small kitchen working from home. Since moving into larger facilities with new chefs and bakers, the information wasn't updated even as the recipe and portions changed.

"Unfortunately, our oversight was assuming the consistency and sizing was still accurate and our embarrassing mistake to not approach it with the precision it deserved," Revitasize told blogTO in a written statement.

"Here we are, humbled and deeply impacted by our loyal and concerned customers who we cherish more than anything. We are here to make our wrongs right and do everything we can to assure that they receive the utmost transparency and honesty."

The company plans to put forward a number of initiatives to prevent mistakes like this from happening again. They include reviewing every product and raw material they use as well as hiring an in-house registered holistic nurtitionist to maintain and analyze products.

Revitasize says they are using this as a learning opportunity.

Still though, Inwentash is concerned the apology may not have been enough, especially after one diabetic follower of hers explained how the improper information affected their health.

"This follower had been injecting insulin in her body based on the nutrition facts of the chocolate zucchini muffin, which were 8 grams of sugar," Inwentash told blogTO.

"They then went on and told me they had been so sick from eating these muffins and it had affected their health. I felt so terrible for them because this is not right."

"My goal at the end of this was to hold someone accountable and responsible," says Inwentash. "Health is something you don’t mess around with."