Someone in Ontario turned their garage into an authentic Irish pub

A tiny garage located by the shores of Lake Huron has transformed into a pub straight out of Dublin.

Toronto resident Kieron Daly, who arrived in the city from Ireland 20 years ago, is one of few urban dwellers lucky enough to own a cottage.

Located about three hours' drive from the city on Southampton Beach, the cottage is nothing fancy, just a two small two-bedroom about 10 minutes from the water. 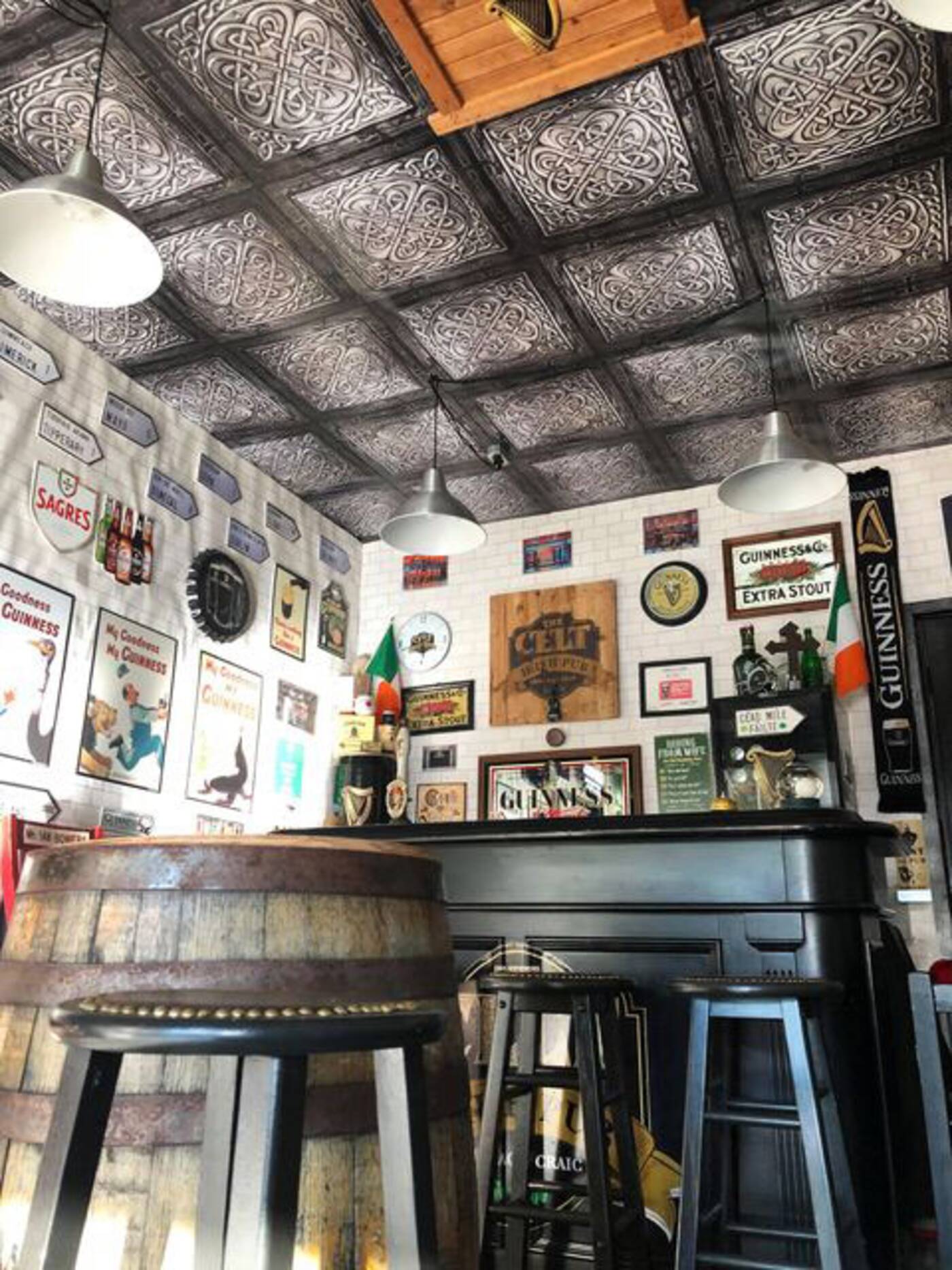 Kieron Daly has transformed the shed at his cottage by Lake Huron into an authentic Irish pub.

But Daly, who works as a production manager for a sign company in Etobicoke, has given his old dumpy garage attached to his cottage getaway an Irish treatment.

Daly's been working on his personal pub, dubbed The Celt, for nearly two years. He put the finishing touches on it right before the onset of the pandemic last year and it couldn't have been completed at a better time. 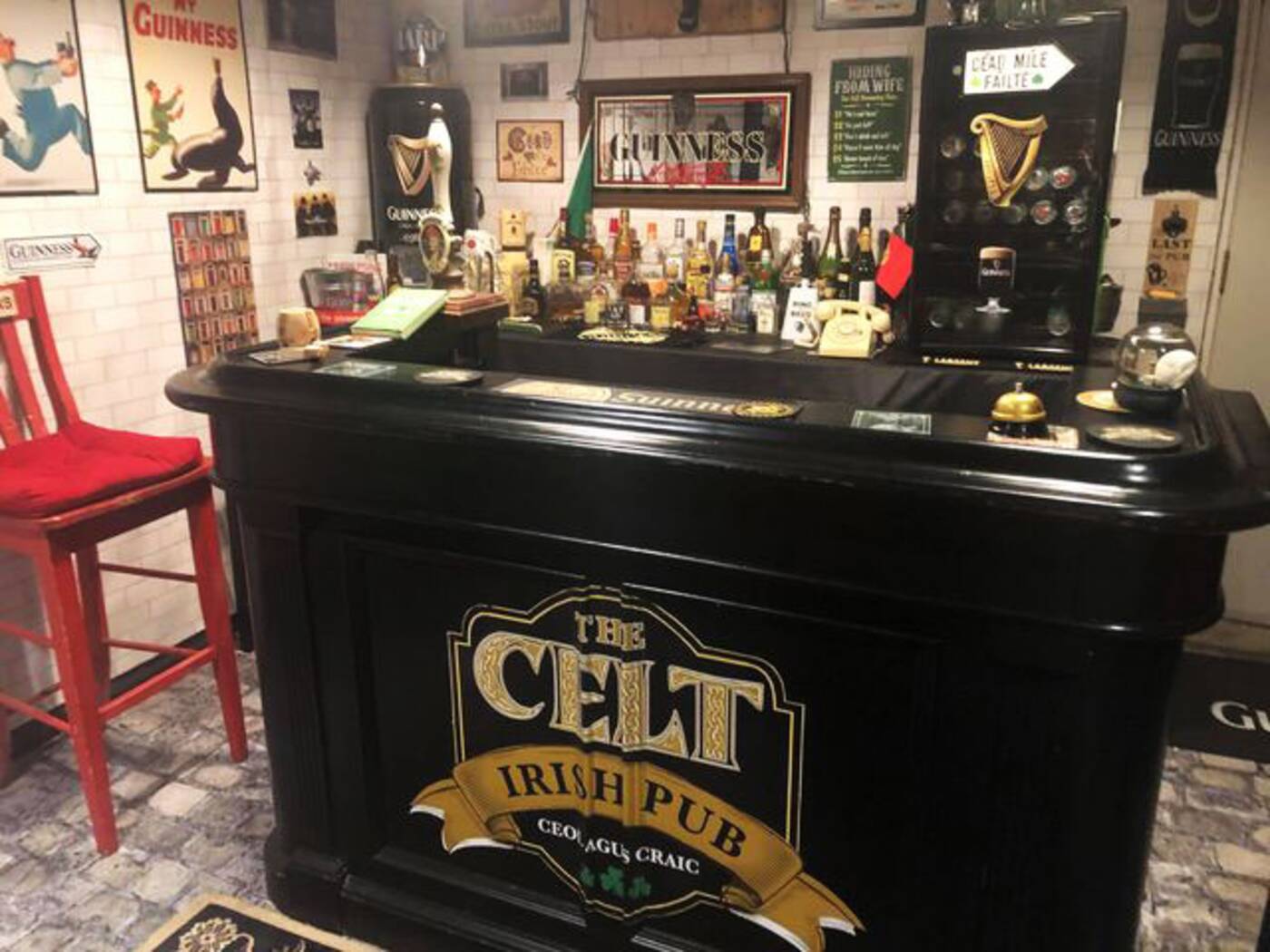 Daly says it all started when he bought a wooden bar from Kijiji for $125.

It started with an old wooden bar from a watering hole north of the city, which Daly bought on Kijiji for a mere $125. The design has only escalated from there.

"When people find out what you're doing, they start to give you things," says Daly. 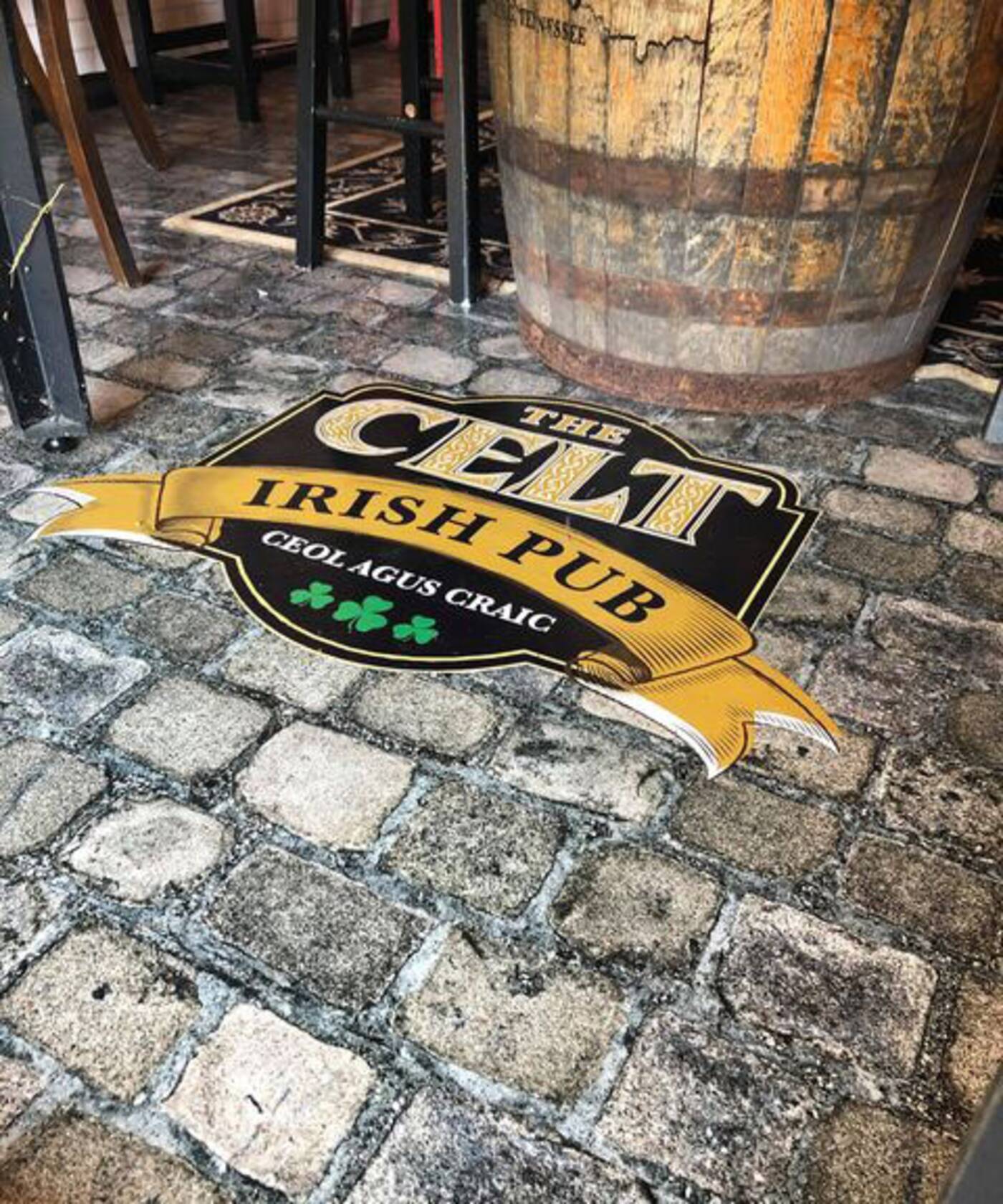 The floors have a cobblestone print, based on a photo taken of a real street in Dublin.

Soon he was receiving details like old English taps, relics from his brother's old antique store in Dublin, and Guinness paraphernalia.

But the most impressive features are the floor, ceiling, and garage doors. The bar is equipped with cobblestone ceilings and Celtic-inspired tiles—printed, of course, from real photos, thanks to Daly's work in the printing industry. 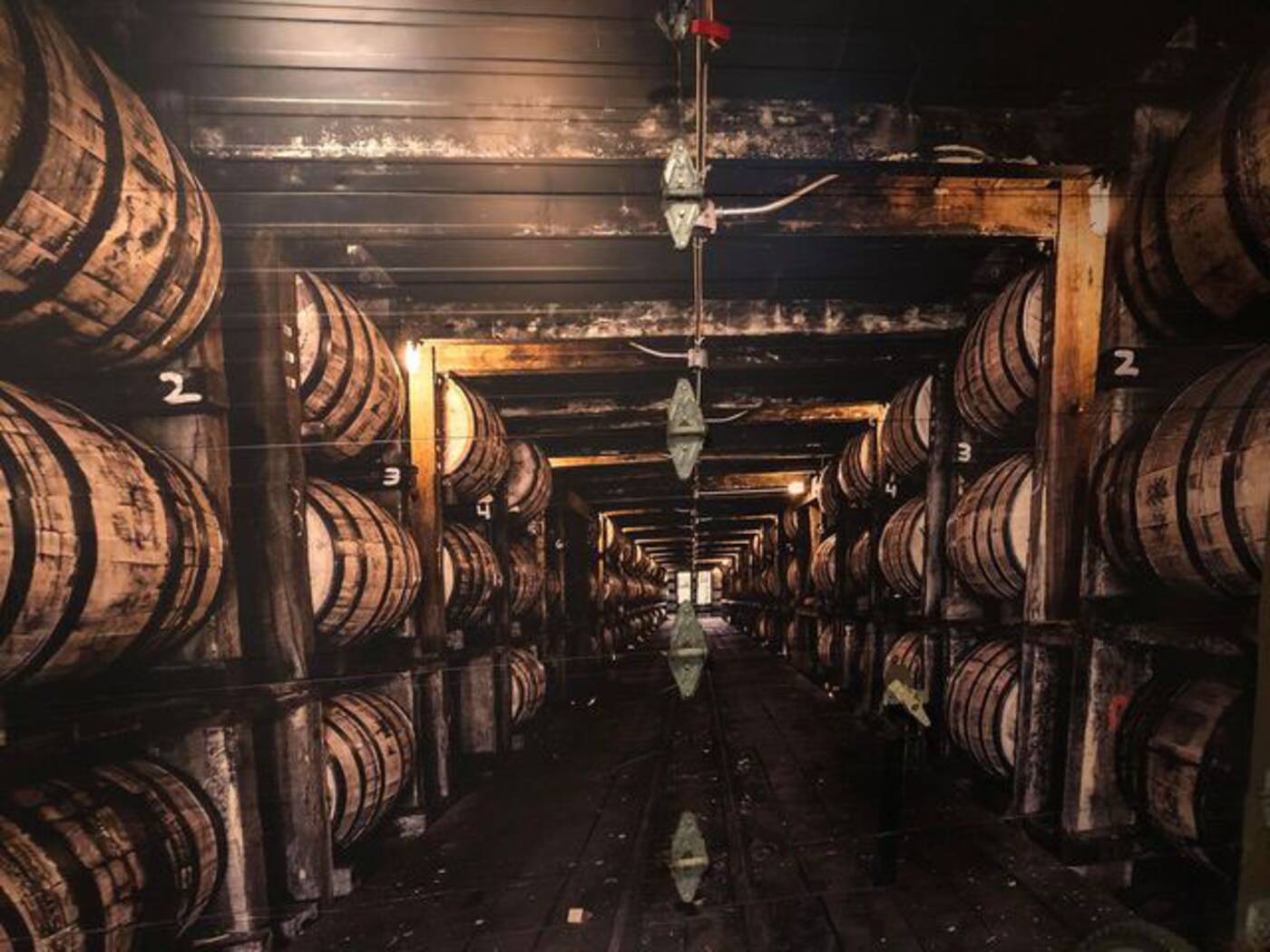 A print on the garage door gives the illusion of looking past barrels of booze down a cellar.

The garage door illusion make it looks like you're peering past barrels of liquor down a dimly lit cellar, a print that Daly says "took around eight and a half hours and a bunch of pints."

With the second St. Patrick's Day in a row ruined by lockdown, Daly says it's been especially hard. Before the pandemic hit, he'd had up to 40 guests over for get togethers.

Someone from Toronto transformed the shed at their cottage by Lake Huron into an authentic Irish pub - 📹 Kieron Daly #Ontario #Cottage #IrishPub pic.twitter.com/MO9j9zQIu5

As a member of the pop and alt rock band Brazen Angelz, there's been plenty of live music played at The Celt too, as is the true spirit of any Irish pub.

These days, it's just a passion project for Daly and his wife as they await better days post-lockdown. 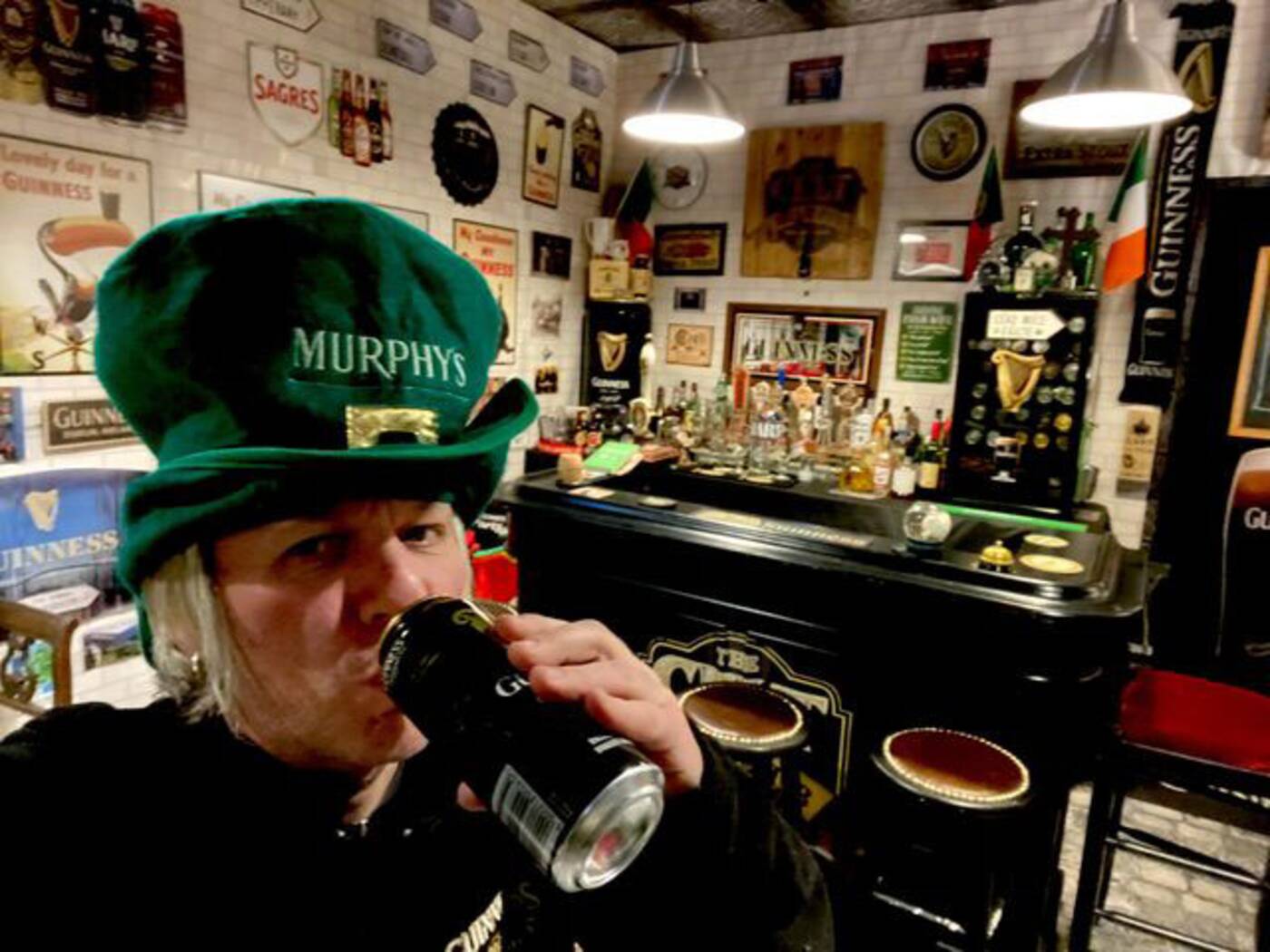 Kieron Daly works as a production manager for a sign company in Etobicoke.

"My cottage is just a small two-bedroom cottage, but the whole idea of having the pub there is just amazing, it's a getaway," says Daly.

"I feel like I've gone back and visited the family. I usually pull my laptop out and get them out on Zoom, and they know I'm behind the bar having a few beers. It's kind of cool."

With better weather on the way, Daly has visions for an outdoor space. He's working on a patio with a hatch that opens up from inside The Celt for optimal beer serving, and the obligatory Guinness umbrellas to match.