More than 6,000 people have signed a petition calling for Ale House, a pub in downtown London, Ontario, to apologize for a sign, now removed, that refered to COVID-19 as "the China virus."

The bar, located about two hours from Toronto, has had several variations of the sign up, with xenophobic language present in each.

As of Friday, Ale House's sign read: "Calling out an oppressive govt is not racist, period! We have respect for all people."

Before that, owner Alex Petro the sign said: "We love Chinese people, we hate the genocide and China virus your commie gov't has inflicted on us."

The sign prior to that one read: "Mr. Ford, history will show lockdowns caused more damage 2 the public then (sic) the China virus."

At another point, it said: "Leftist media labels our British friends U.K. variant, but bow down 2 their China virus masters."

The ever-changing sign has sparked outrage and numerous statements from City officials like Mayor Ed Holder. An unverified social media claim has also suggested Chinese students were denied entry to the restaurant after confronting Petro about the sign, though Petro denies this claim.

Black Lives Matter London reached out to the public with a statement this week demanding swift action against the "racist, violent, and disrespectful language."

But Petro is refusing to apologize for his signs. On Thursday, Petro told Global News: "We've employed over the last 11 years several Asian people. We have no issue against Asian people. And not that you care, but I have Asian friends."

Petro also stated that he was aware his signs could provoke potential "blow-back to Asian people."

Though the London Police Service has recognized that the signs are "disappointing and offensive",  it's not enough to meet the threshold of a criminal offence, they said in a statement.

Stigmatizing language around disease names have been identified by the World Health Organization and Canada's chief medical officer as key factors in backlash against members of religious and ethnic communities.

We have been in contact with LPS and the Downtown BIA to discuss the content of the sign and although the numerous messages are divisive and offensive to members of the community, they do not meet any threshold for criminal charges to be issued. #ldnont

Since the onset of COVID-19, anti-Asian racism and violence against Asian communities are on the rise—hate crimes have increased by 717 per cent in Vancouver, according to the city's poice department—but according to Petro, his "rants" are limited to critcizing the Chinese Communist Party, including its ongoing genocide of Uyghurs.

"My signs are rants about oppressive governments including our own. They are in no way an indictment of the people of said governments. We do, and will continue, to welcome all guests," said Petro in a statement. 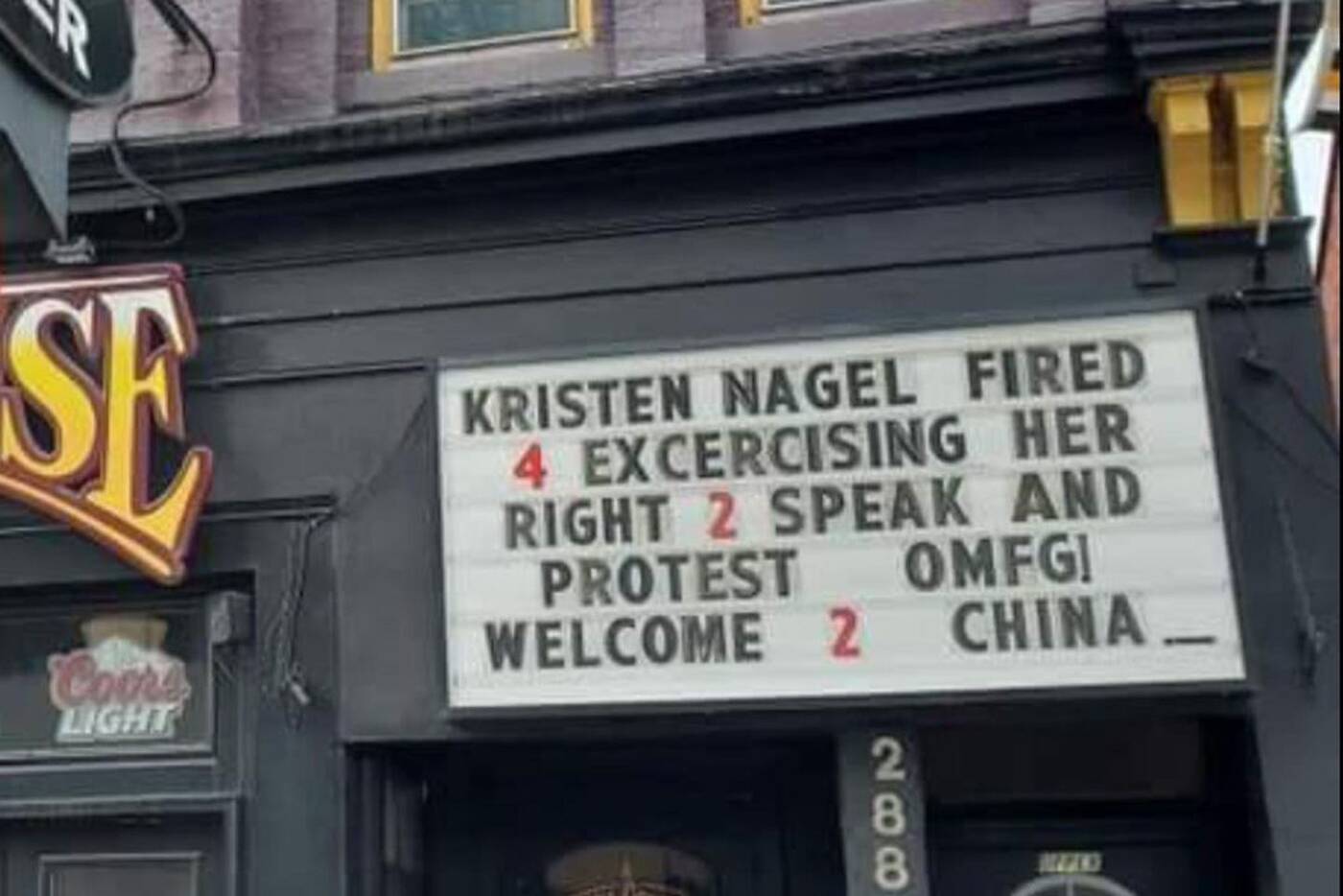 Ale House has used its marquee for other problematic messaging in the past, including a sign of support for anti-masker and former nurse, Kristen Nagel. Photo via @henry_k0000.

The London pub has been using its marquee for problematic messaging since 2017, when it first criticized Kathleen Wynne's government for promising to raise the minimum wage in Ontario to $15, drawing protests from wage advocates.

In January, Petro had a sign in support of Kristen Nagel, a nurse who was fired from a children's hospital after attending and organizing anti-mask and anti-lockdown rallies.