A major culinary foundation has apologized after a reference to a woman's body in a bread recipe got some attention this week, but it appears the wording originated from the Toronto chef.

The story started when a baker went to try a new challah recipe on the New York-based James Beard Foundation website. The recipe was adapted from cookbook Friday Night Dinners by Toronto chef and food writer Bonnie Stern.

"So I was going to make this recipe by Bonnie Stern (who I respect as a female chef) that was adapted and published by the James Beard Foundation and it is saying that the challah dough should feel like a woman's inner thigh?" Ambrosia Corner Bakery owner Aura Hertzog wrote on the Food and Wine Industry Navigator Facebook page.

Hertzog told blogTO she grew up eating challah and has a recipe that she likes, but wanted to try Stern's recipe. She was taken aback by the thigh reference. 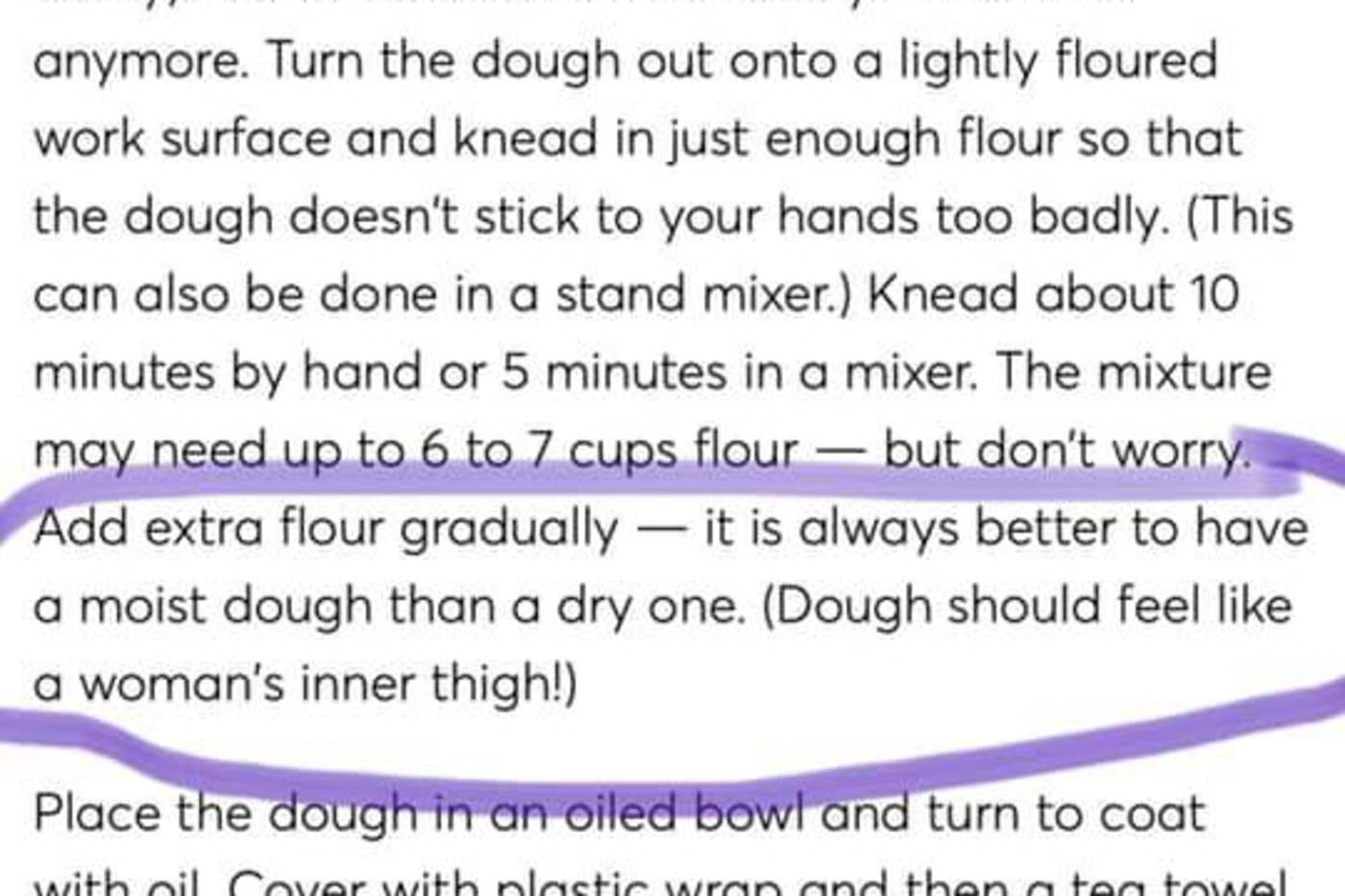 The wording in a challah recipe surprised a Kitchener baker.

"I really respect her and her contributions to the Canadian and especially Jewish food scene," Hertzog said.

However, she went on to say: "Maybe it's small and insignificant but I think it's the small things that sometimes we need to change or question because they can become bigger things."

Hertzog said she tweeted the Foundation and quickly got a reply — James Beard took out the reference on their website and apologized.

"Thank you for bringing this to our attention," the James Beard Foundation tweeted. "This recipe was originally published in 2008 and we have updated it to remove any offensive or inappropriate language."

"I just saw this now and am very sorry for the way this comes across," Hertzog tweeted in response. "I'm very glad it's been corrected here and I really appreciate you bringing it to our attention."

In a 2013 story on the National Post website, chef Stern wrote about making challah for Rosh Hashanah. In the article, Stern describes how the dough should feel.

"I was once told the dough should feel like a woman's inner thigh — kind of true," she wrote.

However, speaking to blogTO, Stern said: "I appreciate that this was bought to the attention of the James Beard Foundation and that the recipe has been updated."

The recipe called Bonnie's Challah on the James Beard site now comes with an editor’s note: "This recipe was originally published in 2008 and included a reference to a woman's body. It has since been edited to remove any offensive or inappropriate language."

There were mixed feelings about the whole thing on the Food and Wine Industry Navigator Facebook page post.

"I'm sure they could have come up with a better comparison," one person wrote. "Just seems a bit.....offputting."

Others found the description somewhat useful, though.

"I tell people that the dough should feel like a fat man's belly," one person wrote.

One person went on to accuse James Beard of being historically misogynistic. In 2018, the foundation announced steps to make the organization more inclusive.

A tale of two challahs. Both @BonnieStern one recipe from @nationalpost and one from @beardfoundation both 4 strand. One stretched longer one baked at 350 one baked at 375 one with black sesame both with kosher salt. Thanks internet! pic.twitter.com/X18SKUudr0

In the end, Hertzog made two Challah breads and both look delicious.

"I am so glad the challahs came out great," Stern told blogTO.