Another small business owner in Toronto is at risk of losing everything after claiming their commercial landlord won't participate in the rent-reducing CECRA benefit — or rather, they allege, that he stopped participating in the program without warning or explanation.

"Despite the announcement from Premier Ford, we were locked out of our restaurant," he said to blogTO. "We cannot afford to have a lawyer to fight the landlord as we don't even have funds to pay the rent."

As it stands now, Siddiqi is locked out, unable to serve customers and generate income, putting his Middle Eastern barbecue restaurant at risk of permanent closure after already losing more than $250,000 due to COVID-19 emergency orders.

"The pandemic dropped our sales and our staff left so we had to close for a month or so due to lockdown, still paying full rent in March with closed doors," said Siddiqi, who first opened Kabob Boys in October of 2019.

"We reopened when the government allowed for take out and deliveries only. We have been paying all the expenses from our pockets and not breaking even just to keep the doors open." 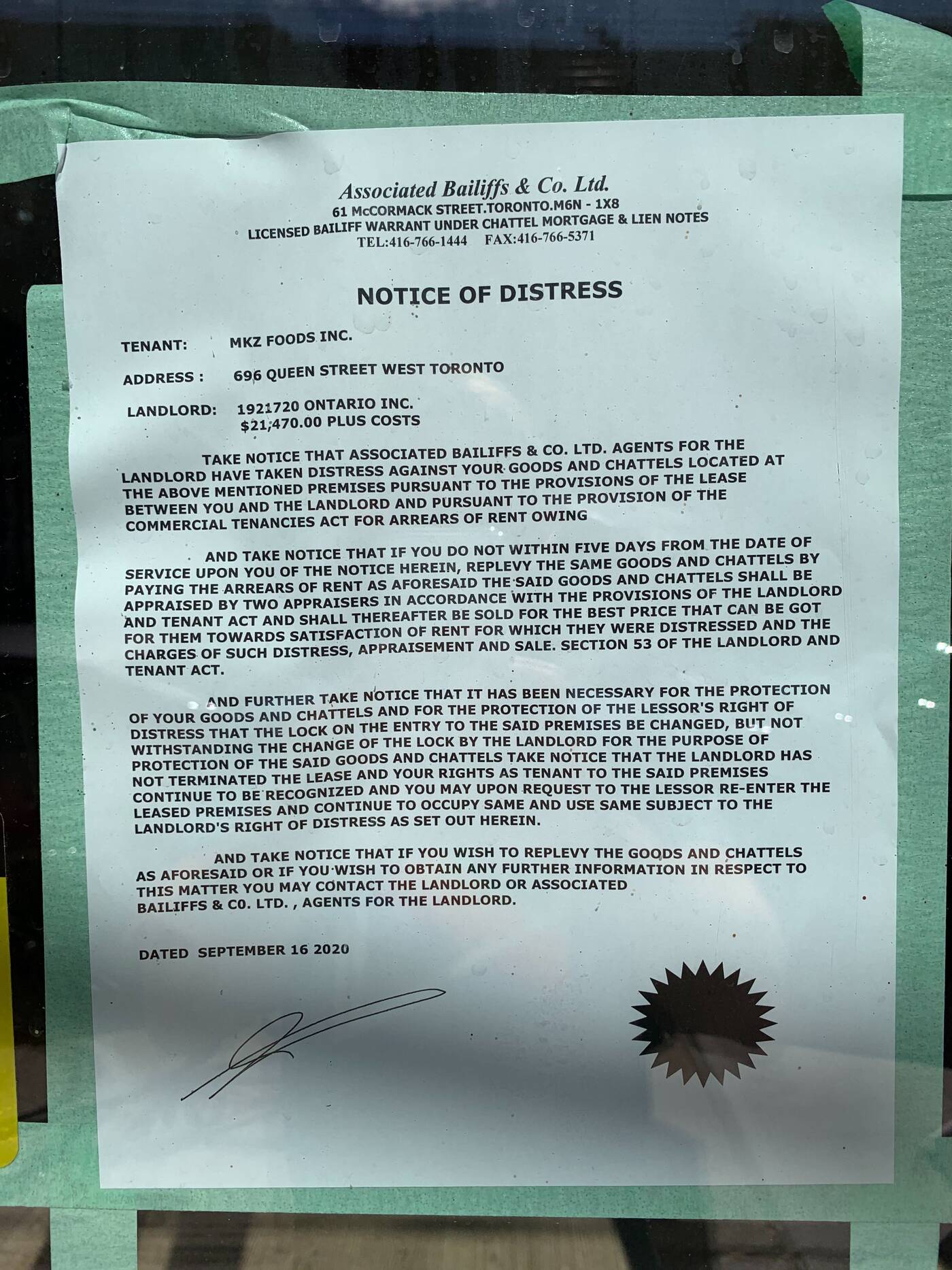 The Notice of Distress posted to the front of Kabob Boys indicates the landlord is owed $21,470. Photo by blogTO.

Ford has said multiple times that the pandemic-inspired ban on commercial evictions in Ontario would be extended past its original end date of August 31.

In fact, on September 4, he went so far as to say "we're extending it as of today."

While true that landlords who evict their commercial tenants after September 1, 2020 will eventually be forced to let them back in, it's important to note that the ban isn't currently, legally in place — the extension is pending as part of a proposed piece of legislation called the Helping Tenants and Small Businesses Act, 2020.

The act, which is almost certain to pass given the PC party's majority government, aims to freeze residential rent increases in 2021 and extend the commercial eviction ban to "protect small businesses and help them get back on their feet."

It is not clear how long the eviction ban would be in place, though it will apply to any businesses eligible for the Canada Emergency Commercial Rent Assistance (CECRA) program.

"As part of Ontario's response to help business recover from COVID-19, proposed changes would extend the temporary ban on evictions of small business tenants and protect them from being locked out or having their assets seized," announced the government on September 17.

"Landlords who evicted tenants or seized their assets between September 1, 2020 and the date the amendments come into force would be required to return any unsold goods and let the tenant back into the unit."

Siddiqi appears to have fallen victim to this gap in legislation, despite the fact that it'll eventually protect him retroactively.

Making matters worse, Siddiqi claims that his landlord unexpectedly jacked up the rent to full price for August and September after accepting 25 per cent through the CECRA program in April, May, June and July.

The small business owner says his France-based landlord has been completely unresponsive in answering questions about why this is the case.

"He is demanding full rent for August and September. If he took the earlier 4 months with 25 per cent, then why not the last two?"

Siddiqi alleges the landlord failed to even notify him of the lockout: he simply saw the distress notice on the restaurant's door when he arrived with some prospective buyers to view the business, which he is trying to sell.

The distress notice shows that a numbered corporation is asking for $21,470 in rent arrears and that, as of September 16, Siddiqi had five days in which to pay the money before everything inside his restaurant could be auctioned off.

"It is just so sad how some people are taking advantage of the weak in pandemic when the whole world is supporting the most vulnerable," he said.

"People loved our food and the neighbourhood was very welcoming as we kept our pricing as such keeping in mind the pandemic effects, not exceeding $11.99 for a huge portion of meal."

Siddiqi has launced a GoFundMe campaign to help Kabob Boys weather the storm.

"These funds will go directly to the restaurant which will help us get the release from landlord and keep the doors open for our restaurant," reads the campaign's description.

"This support I am using for the first time and it will mean a world to us as we are 9-5 kind of people and $250k loss is unbearable in these unprecedented times."