Another day, another inexcusable act of racism in Toronto — this time at the hands of a pub server who labelled two Asian-Canadian patrons simply as "CHINA" when filling out the customer name field of their bill.

Tracey Yang and her boyfriend had been grabbing lunch at the Working Dog Saloon in Scarborough on Sunday, July 14, around 2 p.m. when a server named Sarah delivered their receipt to the table.

They were shocked to see that they'd been labelled by staff as an entire country.

"We were the only Asian customers at the time," said Yang. "When I confronted the server about it she completely brushed it off."

The Toronto woman says she tried emailing Working Dog Saloon's management multiple times to report the act and "gain some insight," but to no avail.

When contacted by blogTO using the phone, the restaurant's owner did say that his email system was down — a statement verified by the MAILER-DAEMONs we received when trying to email the address listed on his website.

Owner Siva Velippillai pledged to investigate the allegations immediately and, after a bit of back and forth between him, us, and Yang, he concluded that the server in question had performed an act of racism.

She was officially let go within just a few hours of our first call to Velippillai — but not before first arguing to her boss that "CHINA" had been a typo. 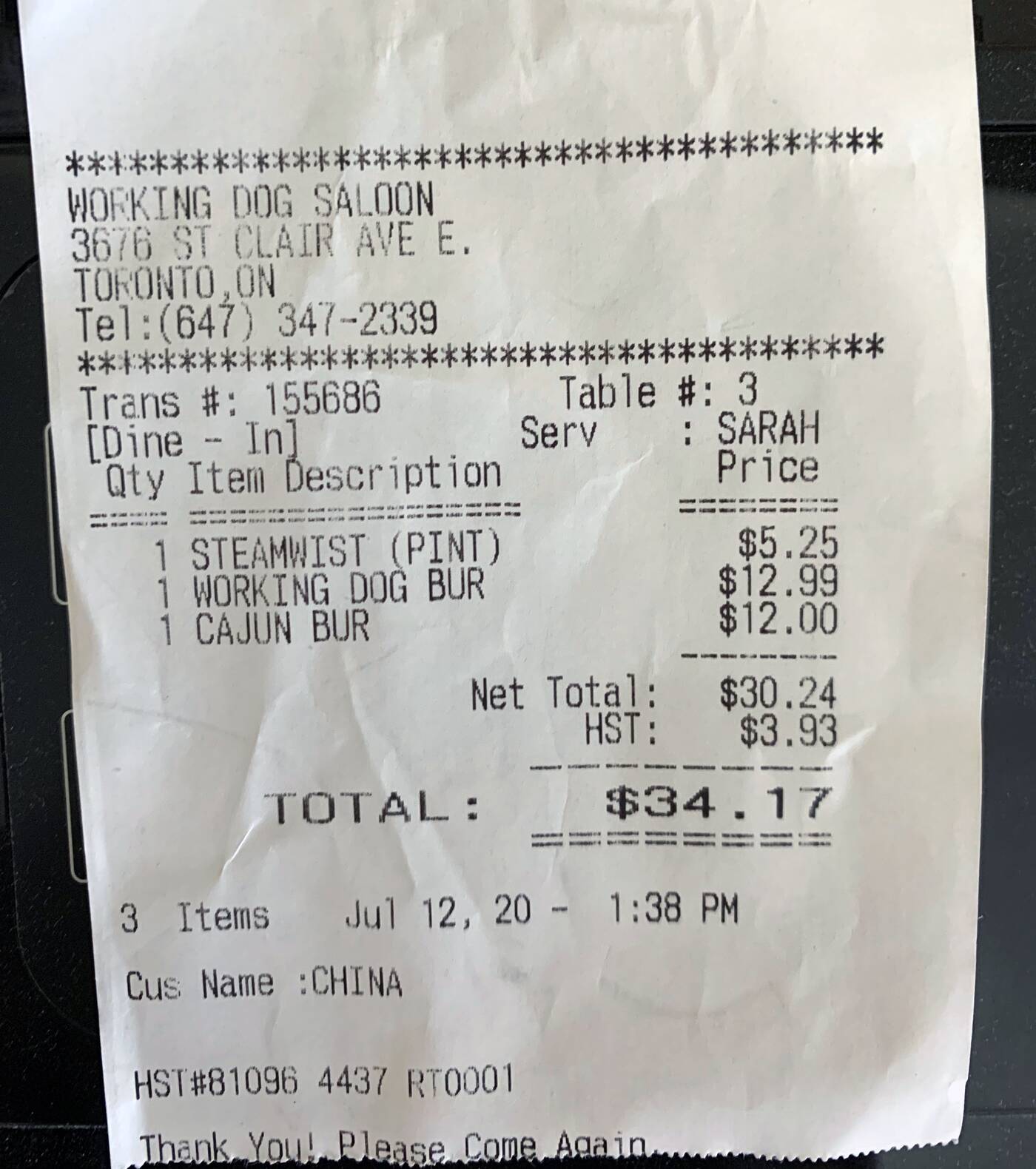 Tracey Yang and her boyfriend were shocked to see their customer name listed as 'CHINA' on a receipt they received from the Working Dog Saloon in Scarborough over the weekend. Image via Tracey Yang.

Sarah initially told Velippillai that she had meant to write "Chan" as the customer name, based on the last name she got from Yang and her boyfriend. She alleged that "Chan" had been autocorrected to "CHINA" in their POS system.

Yang, however, says she never even gave the server a last name. Also, her last name isn't Chan.

"I just find it ridiculous that she came up with this excuse when it is obvious what she meant by inputting 'CHINA' under the customer name," said Yang.

While initially confused about what had happened, Velippillai decided to fire the server after speaking to her for a second time.

"Please understand that English is not my first language and I was not aware of the full story," he said. "It wasn't until the server in question's complete unawareness and compassion to the situation that I realized she was not telling the truth."

"I come from Sri Lanka. I escaped a war-torn country where the government committed genocide towards us for being who we are," continued the restaurant owner. "I understand the mental trauma racism leaves on an individual. I am also personally disgusted by the server's actions."

Velippillai reached out to Yang to apologize personally for "the racist incident" and for not acting sooner. He let her know that "the server's actions are not excusable, and will be held accountable."

Yang stressed that she didn't speak out about what had happened to her at Working Dog Saloon in search of "vengeance." Rather, she wanted to add her voice "to other voices that are shouting this kind of systemic racism is not acceptable."

"It is really unfortunate this happened and I thought it is important to share this... especially considering the current climate with racism," she said.

"This is not something you expect to happen in a multicultural city like Toronto and I wanted to do my part by sharing my experience as a minority in this city."