One of the city's favourite brunch spots has announced that it will be temporarily closing down due to the financial stresses caused by the pandemic.

Le Petit Dejeuner, a restaurant near King and Jarvis famous for its waffles, announced last week that it will be suspending all takeout and delivery operations until mid-June.

The restaurant attributes the decision to a drastic fall in revenue during the current state of emergency, which small independent businesses worldwide are struggling to survive through right now.

"It has proven impossible to maintain staffing, inventory and revenue to operate the restaurant at this time," the post dated May 1 reads. "We will float until we can re-open." 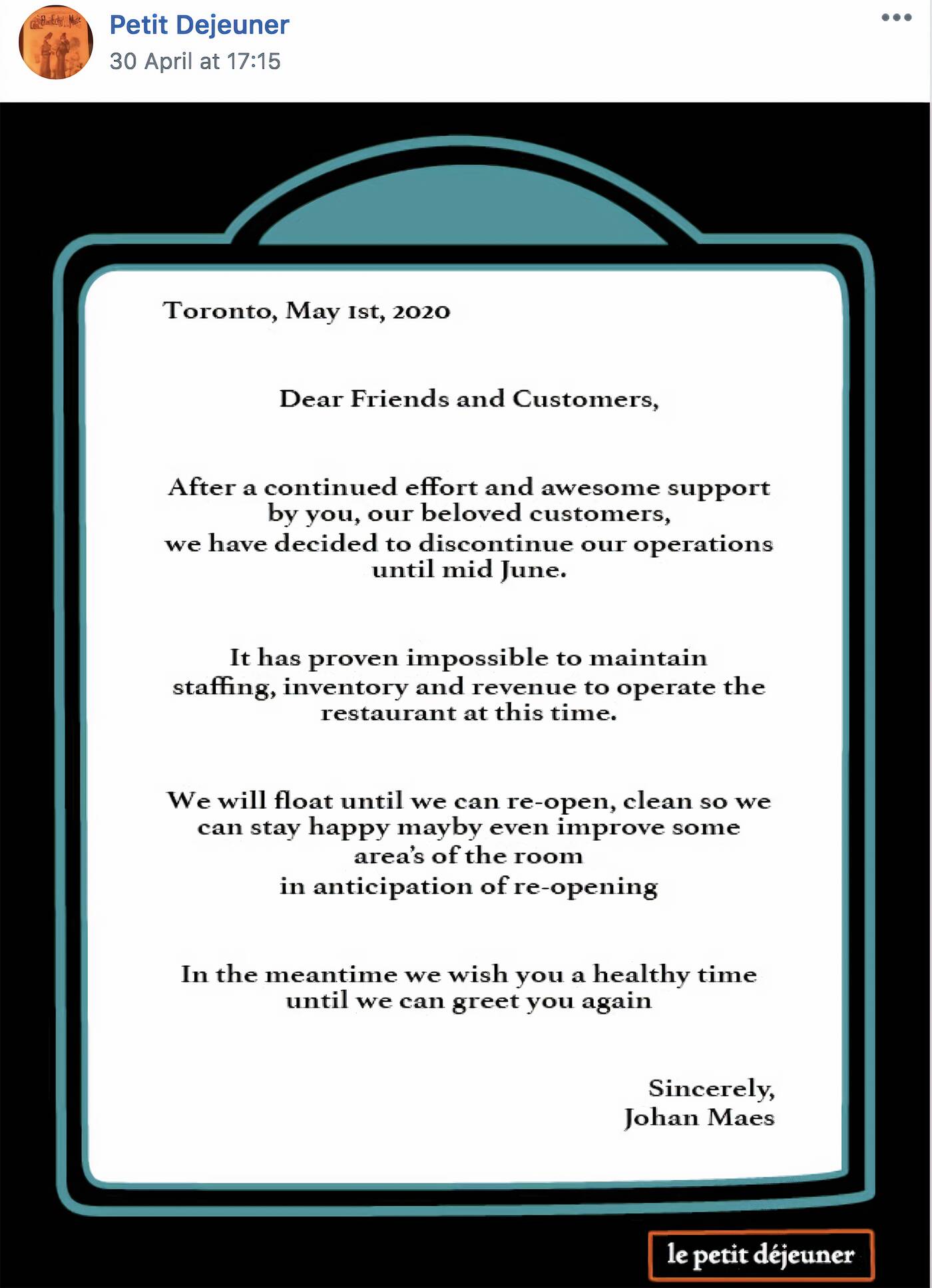 Proprietor Johan Maes says that after lockdown restrictions were introduced in March, Le Petit Dejeuner was still serving quite a number of customers through delivery apps like Uber Eats.

But, given the high cut that third-party food delivery companies take from every order, and also the fact that less people are patronizing local restaurants given that their dining rooms are closed, the location's profits have fallen dramatically over the past month or so.

"My rent is $10,ooo, and although my landlord has made an effort to postpone half of the rent over the following 18-24 months [and] has agreed to apply for the rent reduction scheme, this as you can imagine has grabbed all of this revenue," he says.

Staffing has also been an issue given stay-at-home and social distancing orders, people's fear of the virus, and even the Canada Emergency Response Benefit, through which the federal government is right now paying some residents more than what they would actually be earning at work.

This means, understandably, people may be reluctant to staff a kitchen right now.

So happy I'm getting the CERB bonus- it gives me more money than I ever had working full time. Lol.

Between all of the expenses of keeping things running, Maes was struggling to save the business, period, let alone continue serving food — and also to maintain a good state of mind amid the economic havoc that has come with the global health crisis

"With this pandemic and the removal of my business from existence we had been working seven days a week to clean and repair some items and doing the take out," he says.

"I think if I were to continue to deplete myself until we are actually able to pretend to play restaurant again, I would be an even bigger mess."

As the restaurant's social media post says, for the time being, Maes and his team will occupy themselves by "clean[ing] so we can stay happy, and maybe even improv[ing] some areas of of the room in anticipation of re-opening."

And, there will be some exciting new changes to the establishment when things do finally go back to normal — like the fact that it's slated to extend its hours to become a bar at night.

"We are working how to introduce social distancing efforts and hope that by St. Patrick's day next year, we are still around as a business," Maes says.

"Part of this will be to be open more in the evening as a speakeasy [style] space with less staff and more of me. The daytime will remain the same to a certain extent."