A Toronto restaurant owner alleges their landlord is trying to evict them during the pandemic because they can't pay rent.

Abdul Ahmad owns Ghazale restaurant in the Annex, which is one of three neighbouring restaurants owned by Dr. Yoon Chong Tae and managed by Living Property Inc..

He says the landlord threatened to evict him if he didn't pay this month's rent.

"My restaurant and The Puck Bar and Grill didn’t have the money to pay for April’s rent as we have been closed since March 15," Ahmad explained in an email to blogTO.

In a letter sent to Ahmad and the owner of The Puck, the landlord threatened to evict them if they didn't pay their rent in full plus a $100 administrative fee by April 15, 2020. 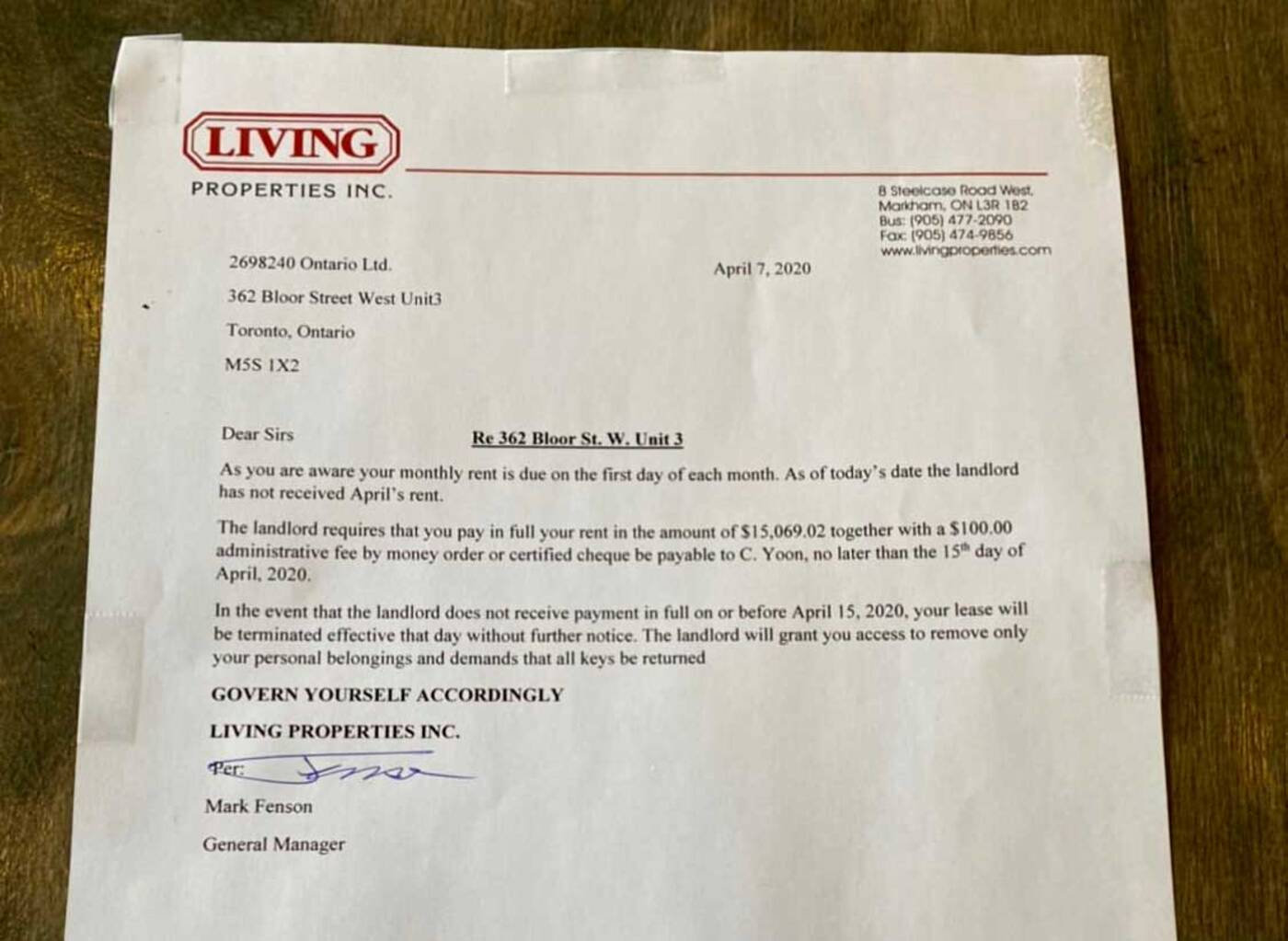 A photo of the letter sent by Living Properties Inc. was provided to blogTO by Ghazale owner Abdul Ahmad.

"In the event that the landlord does not receive payment in full on or before April 15, 2020, your lease will be terminated effective that day  without further notice. The landlord will grant you access to remove only your personal belongings and demands that all keys be returned," the letter dated April 7, 2020 reads.

Ahmad says he ended up using money from his overdraft to cover April's rent but is now out of options.

"Every day that goes by I have to worry about May 1st. You lose sleep about this [guy] trying to take your restaurant," he said.

Meanwhile, The Puck was less fortunate and got an eviction notice. According to Ahmad, they decided to pack up and leave before the landlord came to lock them out. As of today, there's already a for lease sign on the building.

"It's so sad and this guy took his $50,000 security hold," alleges Ahmad, explaining that both Ahmad and The Puck owner have payed substantial security deposits that could, in theory, be used to cover rent.

When Ahmad proposed that the landlord use part of his $30,000 deposit during a phone call on March 28, he was denied.

"He refused to use the security deposit to pay for the rent and told me he would keep it," Ahmad claims. "He is trying to capitalize and profit by keeping our large security deposits and inheriting our businesses."

Ahmad also recently invested $200,000 renovating the property during the summer of 2019 and would likely have to write most of that off as a loss too if he gets evicted.

"It's almost in their best interest to take back their property," he said.

When blogTO reached out to  Living Property Inc. and Dr. Tae both refused to comment.

Currently, it is still within the landlord's legal rights to evict commercial tenants for failure to pay rent but Ahmad, among many other small business owners, hopes the government will step in soon.

"These are not normal circumstances and I don't know why the government hasn't stepped in," said Ahmad.

In the meantime, Ahmad is scrambling to find financing for next months rent and has resorted to calling in favours so he can stave off eviction.

"God forbid it comes down to it," he said.