Restaurants around the world are doing what they can to make ends meet during the coronavirus pandemic —including mass layoffs —  but the ex-employees of the Momofuku's Toronto location aren't happy with how the chain is handling their dismissals.

Toronto's outpost of Momofuku, the high-end Japanese food brand helmed by celebrity New York chef David Chang, was one of many food industry businesses to conduct temporary layoffs of its staff as dine-in restaurants shutter globally in an effort to curb COVID-19.

Following the closures of Momofuku restaurants in New York, Washington D.C., and Los Angeles on March 14, scores of Toronto employees were informed that they, too, would be out of a job by the end of the day.

The announcement initially came as no surprise to most working at the University Avenue restaurant as measures to control the virus began to ramp up worldwide, with the food industry in particular taking a massive hit.

Momofuku is starting an employee relief fund to support our team members during this crisis. Over the last 15 years, Momofuku has grown from an army of one to a team of hundreds. This quarantine is necessary but also the hardest thing we’ve ever faced as a company. It’s been devastating to have to let go of people who have worked so hard to make Momofuku what it is. I’ve recorded an episode of @davechangshow to try and rally support for all the restaurants going through the same struggles. Listen in, call your elected officials at (202) 224-3121 and please donate if you can at the link in my bio. ❤️

But what did confuse Toronto ex-employees were social media posts from Momofuku and its owner David Chang sent out on March 20 promoting something called the Momofuku Employee Relief Fund.

"100% of the proceeds will go directly to supporting our teams who need immediate relief as we navigate this crisis," says the Gofundme page.

In response, a number of Momofuku Toronto's FOH employees penned a letter to management and their HR department:

"We read David Chang's statement from his Instagram account, that he (and the company) are committed to providing hourly staff's wages until March 20th," wrote staff. "When we received an e-mail from Human Resources there was no mention of this agreement."

"Many smaller, less financially secured restaurants in Toronto are doing their best to keep staff employed during these times and to continue paying wages, even though many of these restaurants will be significantly more at risk of closure than Momofuku Kojin and will not be open for regular dine-in service."

Aside from asking Momofuku Toronto to honour all wages being lost in light of layoffs, staff also asked that the restaurant consider donating its food left over in the kitchen.

"...the restaurant is currently stocked with a large amount of perishable foods and we would like to see a commitment to providing these to at risk staff members or to the less fortunate in our community." 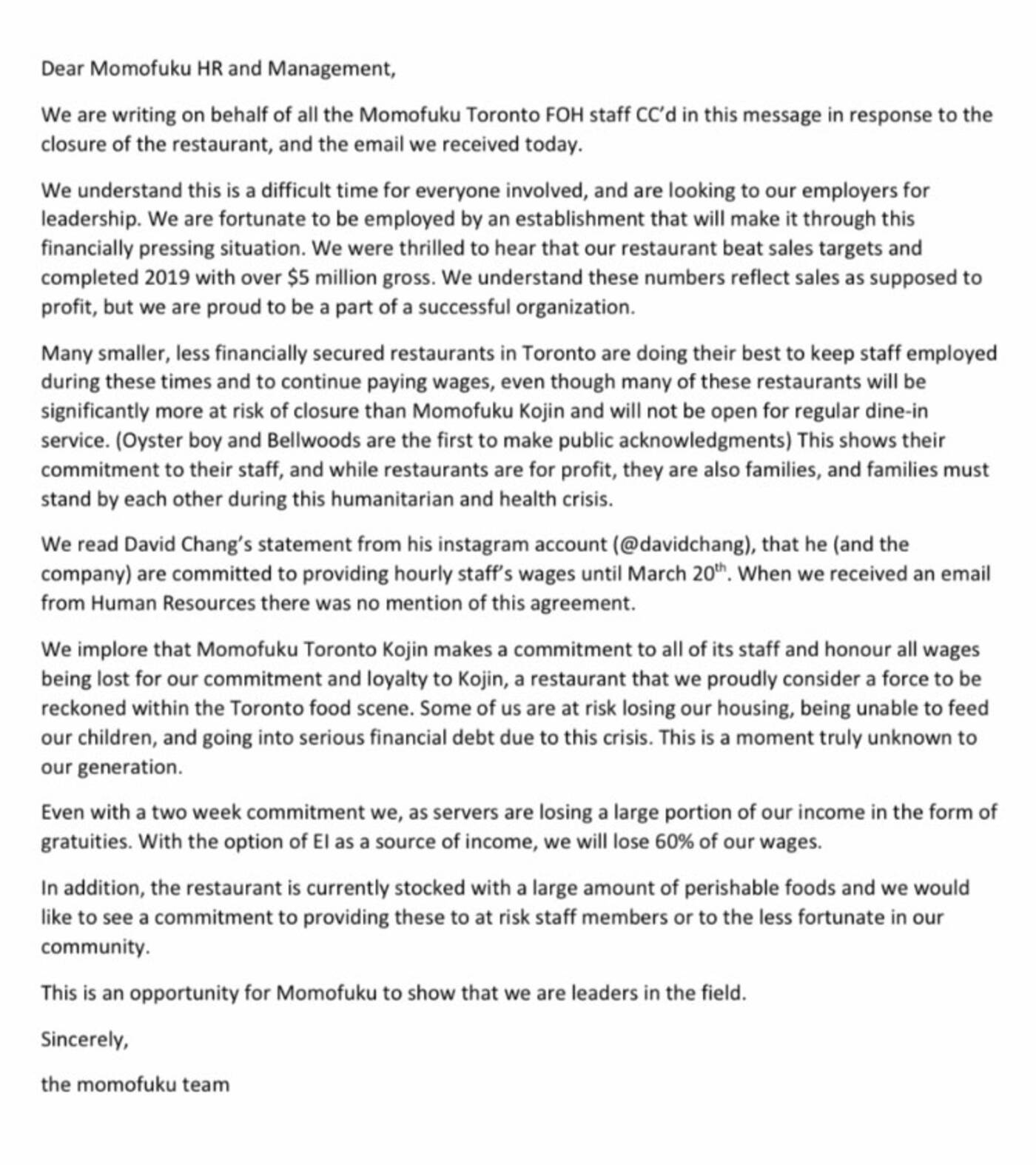 Some of Momofuku Toronto's staff sent a letter to management regarding the Momofuku Employee Relief Fund.

In response, Momofuku Toronto sent out a statement outlining the process for staff to access Employment Insurance. It also clarified that all donations to the Employee Relief Fund would only go toward staff in Momofuku's New York, Washington, and L.A. locations.

"We are by far the most fortunate due to our government actions and our fully funded healthcare," wrote management. "Please remember, our American counterparts are not so lucky so lets put our most positive thoughts to their success through this."

In New York, more than 300,000 people working in the food industry have been affected by mass layoffs, with jobless claims increasing by more than 1,000% in some areas of the state, according to New York's Department of Labour.

The state has announced that it's waiving interest and penalties on late sales tax payments, and is offering a zero-interest "disaster loans" of up to $2 million for small businesses.

Here in Canada, Prime Minster Justin Trudeau announced last week that the Federal government will be launching a precedent-setting payroll subsidy that, when it comes into affect, will cover a whopping 75 per cent of wages to deter eligible businesses from laying off staff.

But as of right now, there's been no news about how those subsidies will apply to the ex-employees of Momofuku Toronto, or if the company is even eligible at all.

And according to several Momofuku staff, who asked to remain anonymous, the Employee Relief Fund was both confusing and "embarrassing" for the brand at large, which is backed by investors like billionaire and owner of the Miami Dolphins Stephen Ross.

"Optically, it feels a little gross," says one employee, who has worked with the company for more than five years.

"We know it's a very successful, very famous, very well-financed brand. It feels a little uncomfortable, but that’s not to say I'm not happy that it’s being done, because people are going to need money and they don't have the supports we have."

Another employee, who has worked at Momofuku for two years, says he feels embarrassed that the chain asked for donations from the public, especially when some other smaller companies continue to pay their ex-employees well into April.

"A lot of restaurants may ask for donations if they’re actually helping the community, like delivering food to people in need, and those are small businesses."

Momofuku's VP of Branding and Marketing, Ryan Healey, says that the staff of the company's Toronto location are not actually employees of Momo Holdings, the American company that launched the Relief Fund in the first place.

"It's not a Canadian company so we needed to come up with a unique solution that benefits the team in Toronto," said Healey, who also stated that the restaurant has donated its perishable foods to the food rescue charity Second Harvest.

"We are going to sell Momofuku Toronto gift cards and put that money towards helping people during this tough time. We just have a few more logistics to work through but are racing to get that set up today or tomorrow."