An Antifa protest outside a Maxime Bernier event in Hamilton got slightly out of hand last weekend, when 81-year-old Dorothy Marston was called "nazi scum" while trying to enter the venue where the leader of the People's Party of Canada was speaking.

That was just one of many heated interactions that occurred during the protest, which led to four people being arrested for "breach of peace" before being released without conditions, Hamilton police told the CBC.

A video of the interaction between Marston and protestors has since gone viral online, receving millions of views and sparking outrage.

7 million views on this video. pic.twitter.com/PfPrHIXryN

It also led the owner of Toronto Syrian restaurant Soufi's to reveal that one of the masked protestors from Sunday's incident was his son.

He said his son believed he was going to an anti-terrorist rally, and said he "feels utmost regret" about not helping the elderly woman.

On October 1, the father of Antifa Alaa Soufi Dalua confirmed to me that it was his son wearing the mask at the rally. Claimed his son thought he was going to an "anti terrorist rally." I sent his email to Hamilton Spectator and other Canadian papers. They've done nothing. pic.twitter.com/8xYfoiQnft

The owner also released a public statement about the incident on the restaurant's now deleted Facebook.

"Alaa regrets that he did not step aside and/stand up against the act of verbal abuse that occured against her, and would love the opportunity to personally extend his apologies to her," the satement says.

"Our family and business do not condone acts of hate, violence or harassment in any shape or form, and advocate for peace, equality, and free speech for all human beings." 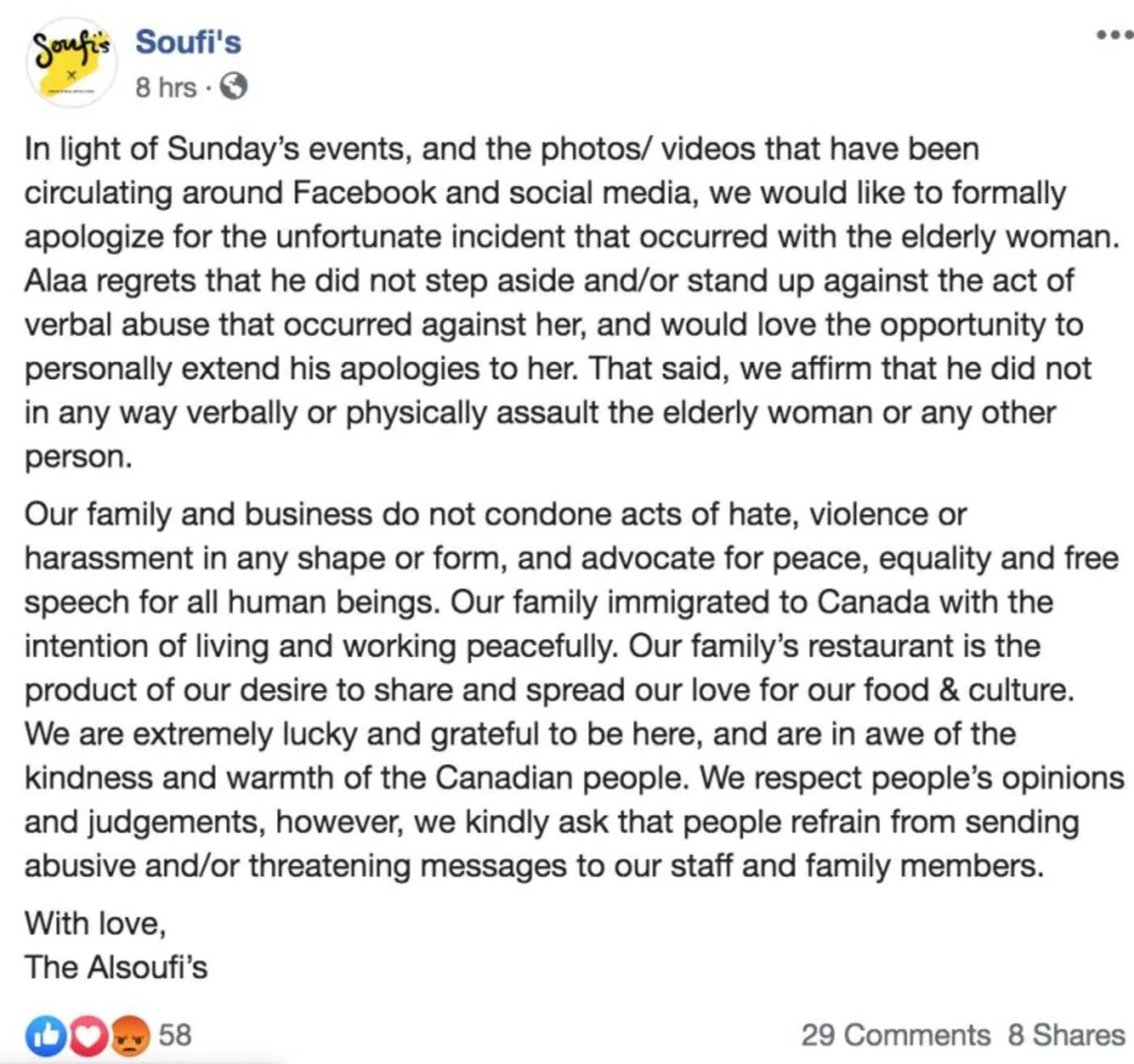 Marston's husband, Brian Marston, told the CBC the couple plans to speak with police about the incident, but said they have no desire for retribution or to get back at anyone.

"What we'd like to see is that would never happen again," he said.

Meanwhile, the owners of Soufi's are asking "that people refrain from sending abusive and/or threatening messages to [their] staff and family members."