A Toronto supermarket known for its health-conscious vibes has cancelled one of its Valentine's Day promotions after being bombarded with complaints from vegans who don't appreciate their meat shapes.

Prominent local animal rights activist Len Goldberg posted a photo of the display in question, found in the butcher's section of The Junction's Sweet Potato, on Facebook Wednesday afternoon.

"Top Toronto health grocery creates hearts out of animal flesh for Valentine's week," he wrote. "Why you being so disrespectful to oppressed animals, Sweet Potato?"

Nearly 100 of Goldberg's Facebook followers have since commented to express their disgust over what appears to be steaks pushed together to look like hearts.

"Nothing says 'I love you' better, than dead cow flesh in heart shape," wrote one.

"Ironically it's also what stops and kills OUR human HEART," wrote another. "Literally and figuratively."

Within hours of Golberg's post going live, the grocery store contacted one of the many people who'd complained about the display to announce that it had been terminated.

"Thank you for expressing your concerns," wrote the store to Goldberg's friend Sarika Goode. "We've passed this message on to our store manager. I can assure you there will be no valentine themed display in our butcher counter tomorrow." 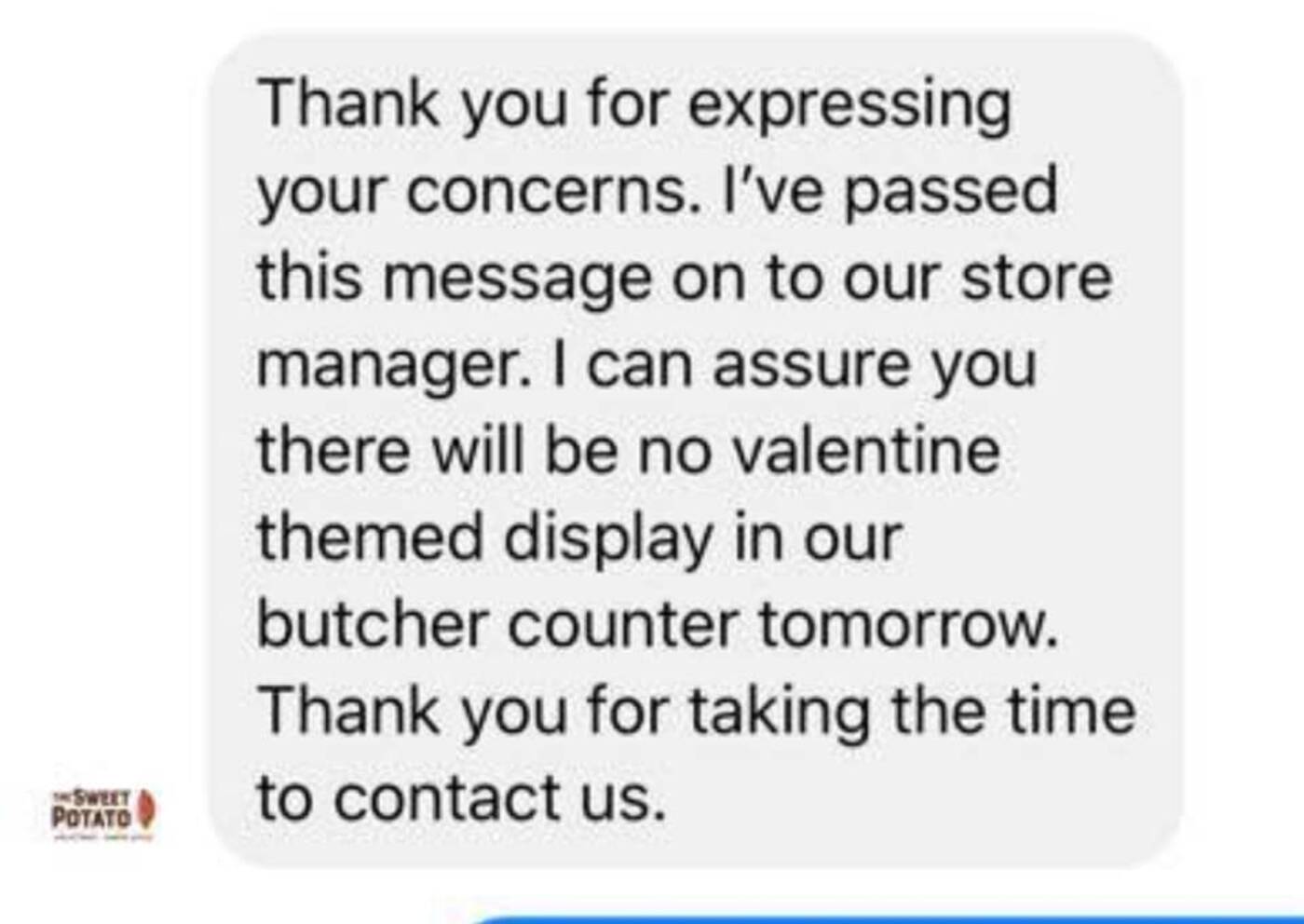 The Sweet Potato told at least one complainant on Wednesday afternoon that their heart-shaped steak display would be discontinued. Image via Len Goldberg.

Goldberg, while pleased with the grocery store's swift action, isn't 100 per cent convinced that the problem has been remedied.

"We're returning today to make sure the Sweet Potato has discontinued this display that degrades, disrespects and demeans animals," he said in an interview on Thursday.

"We deeply appreciate the store's inspiring compassion for animals in this respect, and now the Sweet Potato needs to take the big step, join the vegan revolution, stop selling animal flesh, stop telling the public that these murdered animals are raised "humanely," and become Toronto's first full-service vegan grocery," he continued.

"Aside from the flesh, we vegans love the Sweet Potato."