Walk into your local coffee shop and there's a pretty high chance the place will be brimming with laptops, iPhones, and headphones.

Gone is the era when these communal spaces were reserved for conversations with friends over a cup of joe: these days, cafes are synonymous with getting work done – usually alone.

While no one is saying it's a cardinal sin to bust out your laptop at the local Starbucks, there's a definite contrast between the coffee shop culture of today and that of pre-technology yore.

To remedy this disparity, some cafes in Toronto have taken it upon themselves to forbid or discourage the usage of laptops – often during specific hours – in an attempt to revert back to the old ways of cafe communication. 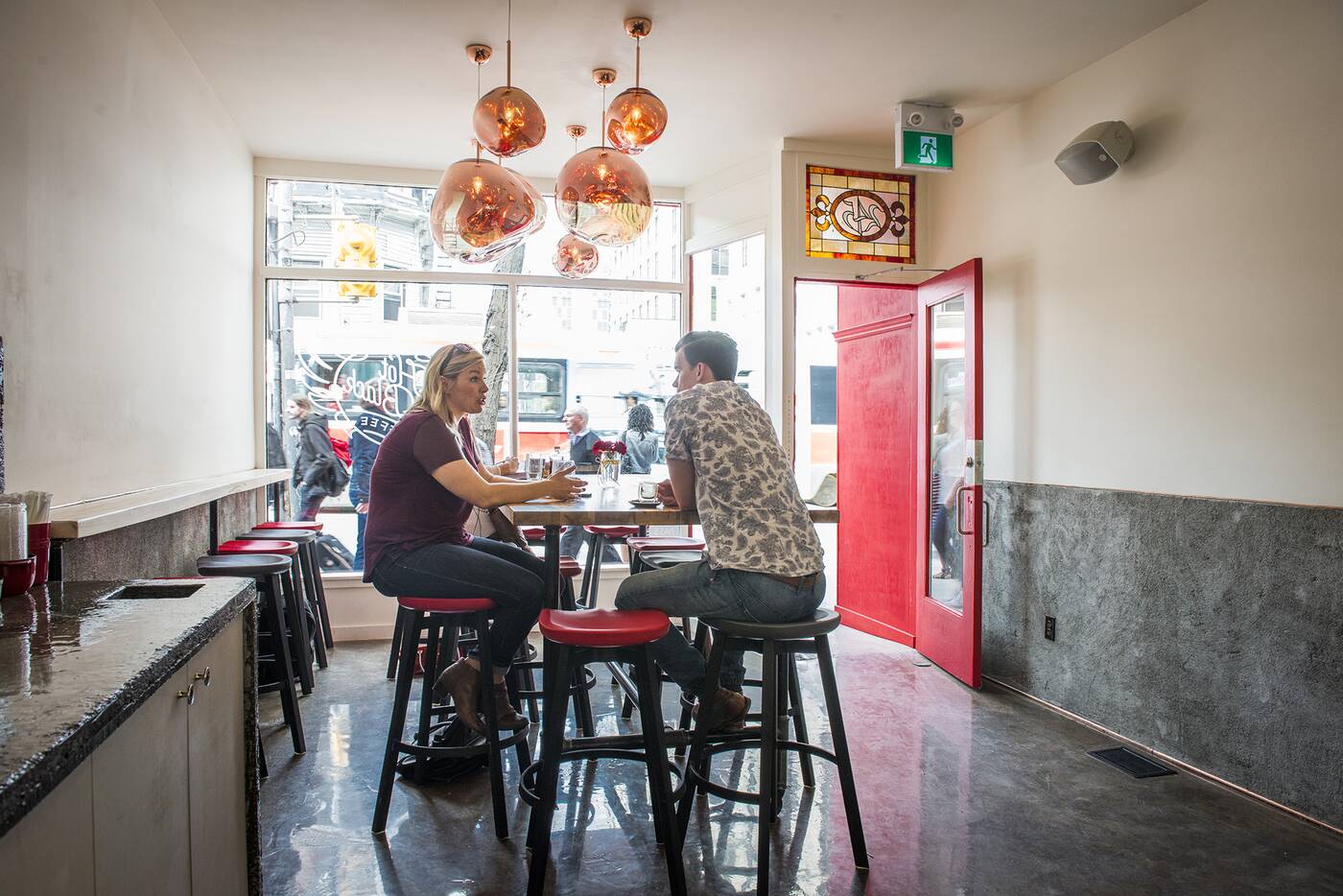 HotBlack Coffee, the fresh-faced space on Queen West has boldly opted not to offer WiFi to its guests since it opened in late 2016. Same goes for Baddies at Lansdowne, or the big-brand coffee magnate Nespresso in Yorkville.

Cafe Pamenar in Kensington has been running a similar play for years by enforcing its no-laptop rule after 8 p.m. – a necessary tactic for the cafe that transitions into a bar hangout after dark.

While not as all-encompassing, Early Bird on Queen West manoeuvres around antisocial laptop users with little signs designating certain tables as laptop-free zones.

The newest to join the computer-less front, Neo – King East's favourite cafe and Japanese bakery – has started putting up table signs of its own informing customers that laptops are no longer welcome on weekends between 12 p.m. and 4 p.m.

"Join us in creating a community that encourages social interaction and making new friends," says the sign.

According to the founder Masashi Nakagome, the endeavour has been surprisingly well received by customers.

"Ninety percent of people seeing this sign say, 'That's great, we need to do this,'" he says. 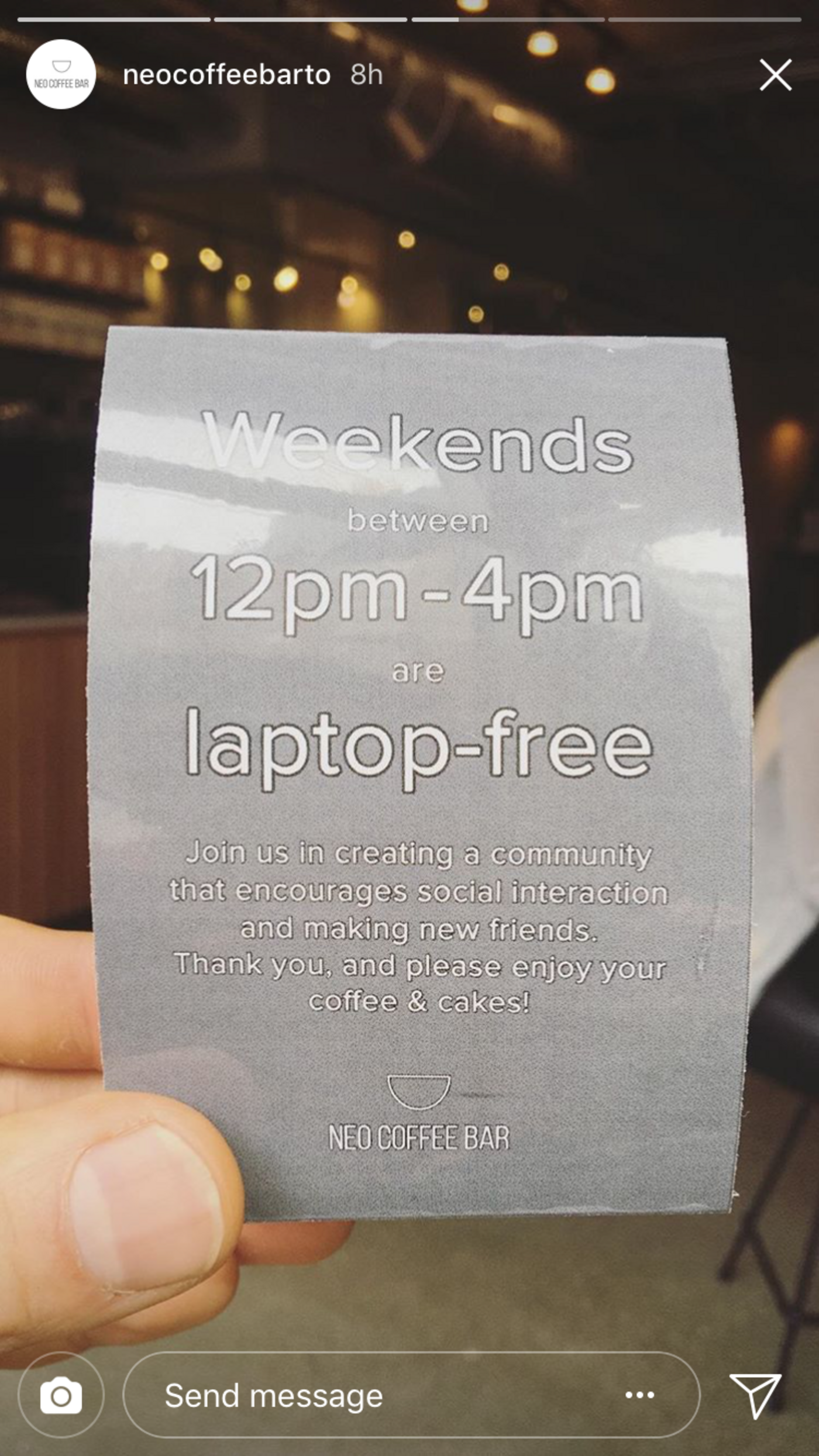 Masashi says the decision to adopt this new policy came after receiving multiple comments regarding a lack of space at Neo – odd, considering the cafe has a capacity of 40 people.

He realized the problem was the abundance of laptop users who would often take up an entire section of a table, a habit he first tried to remedy with a polite reminder to share the space.

"We had a note asking people to share the table," he says, but the request went disregarded. "Most people didn't do that."

Having worked at Little Italy's Manic Coffee for nearly six years, Masashi recalls the ease of making new friends and sparking conversations with strangers in an open coffee shop environment.

His current no-laptop rule, albeit only on weekends, is a way to resurrect that feeling at Neo.

"The coffee shop we started is more about community, it's not an office," he says, adding that this new rule has freed up room for customers who visit Neo to enjoy coffee and cakes, not work.

"Weekends [are more] for friends meeting up with each other and families."

So far the move has prompted only one negative reaction: despite being told twice that laptops weren't allowed, a customer persisted on using his Mac until eventually demanding his money back – a request which Neo complied with, for the sake of brevity.

"I welcome people coming with their laptops," says Masashi, stating that four hours a day on weekends isn't a lot. At the end of the day, Neo still offers WiFi daily, so anyone desperately in need for interweb communication can log on using their phone.

As to whether or not the cafe will profit less from customers flocking to cafes with WiFi, it seems Neo is willing to take the loss.

"We might lose money, but I love that people come for the coffee," he says. "I totally want to keep doing this."