Complaints on the rise in Toronto's restaurant industry

Working in a restaurant is unlike any other job. This much can be agreed upon, whether you’re a server, a chef, a hostess, a runner, a manager, bartender, or owner.

With longer-than-normal hours, intensely intimate atmospheres, and super tight-knight teams of employees, a lot of people say it's like being part of a family.

Unfortunately, some families come with shady relatives who don’t pay back money and expect you to babysit for free.

#FastFacts: The #restaurant industry directly employs more than 1.2 million people, or 6.9% of the Canada's workforce

A few weeks ago, Chef Grant Soto blew the lid off an illegal policy at some of Susur Lee's Toronto restaurants that saw employees being forced to hand over their tips to management.

The celebrity chef’s now widely-criticized IOU policy, which docked staffers up to $100 a week for spilled drinks and walk outs, had been in place long before it came to light.

It was only after media outlets starting publishing messages from burned employees that the restaurant group discontinued its policy and pledged to reimburse employees for their lost tips.

I sincerely hope this brings more of the labour issues within the service industry in Toronto to light. #susurlee

We've received many messages from industry workers in the wake of the IOU scandal, and also after last month's staff revolt at Poutini's, when employees walked out over what they said were unsafe working conditions.

A lot of these restaurant workers across the city could put their bosses on blast for things like unpaid wages, sexual harassment, and even tax evasion, but won't for fear of losing their jobs and damaging their reputations.

"When you're hardly making anything, it makes it harder to fight for your rights," says Ivy Knight, a well-known Toronto food writer and former cook. "It's almost like we feel we don't deserve it."

Knight, who worked in kitchens for 10 years before transitioning to writing full time, started the very popular Food and Wine Industry Navigator Facebook group a few years back to help industry workers connect and find jobs.

The group has since grown to more than 23,000 members, and while it still functions as a job resource, Knight says it's progressed in recent years to serve as a forum for people who need help with labour issues as well.

"The group does a great job of providing advice on employer/employee rights and creating community support," says Knight, "but a lot of the time this support is provided after the exploitation has occurred."

"It’s tough," Knight says. "I see people who say 'I worked these shifts and I didn't get paid'... [the industry]'s always been like the Wild West." 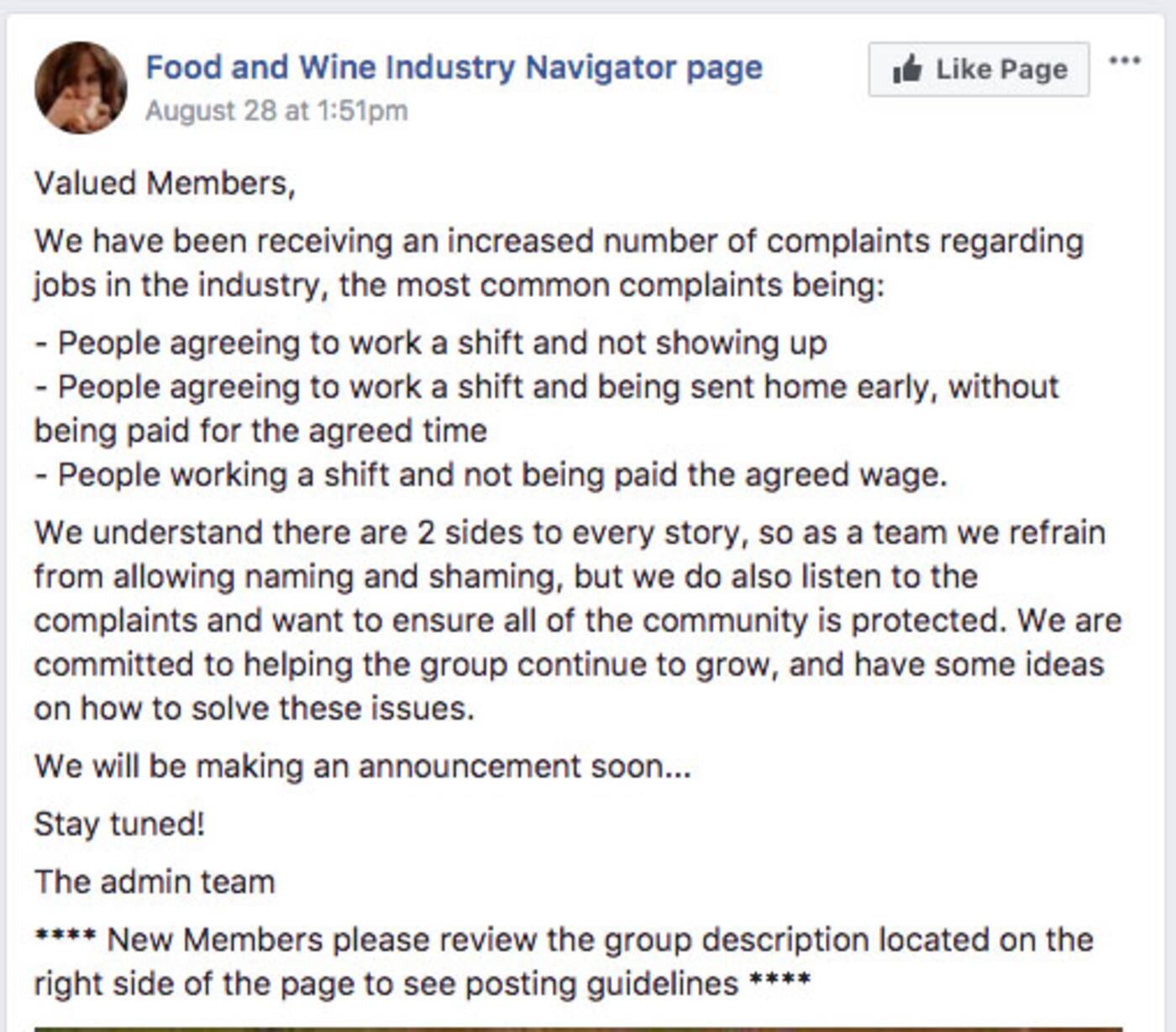 The Food and Wine Industry Navigator page is a valuable resource for restaurant jobs in and around Toronto.

On Aug. 28, The Food and Wine Industry Navigator page posted a message to its members, saying that moderators had been receiving an increasing number of complaints about things like people being sent home early from shifts they'd agreed to, or flat out not getting paid for their work at all.

"A lot of it is under the table, so there's always a risk," Knight says. "But it is shady. It happens on a grassroots level. It happens differently in each place. Everybody kind of plays by their own rules."

The Food and Wine Industry group has been working to help restaurant workers in a more formal way by building an app with the start-up Pluggd.

The app, which is set to launch at the end of the month, will "ensure everyone in the community is protected and that those employers with good practices and valuable/reliable staff are rewarded for their contribution to the industry."

This should come as good news to those advocating for stronger protection against exploitation in the restaurant industry.

Labour laws in Ontario can be notoriously be murky surrounding restaurant work, and while efforts are underway to pass legislation that would make things more fair, experts say that existing laws are rarely enforced as it is.