How to eat gluten-free in Toronto

Eating gluten-free at restaurants in Toronto is a challenge. Thankfully, there are more and more options these days where the food isn't only celiac-friendly, it's also delicious.

Here is my cheat-sheet to eating gluten-free in Toronto.

Dirty Bird uses a signature gluten-free flour blend to coat their chicken, but even poultry connaisseurs won’t be able to tell it’s gluten-free. Not only is their chicken crispy without being greasy, but they also stock gluten-free waffles so we’re not left out of classics like the ODB (fried chicken with a waffle, buttered maple syrup, and dirty sauce).

Enoteca Sociale is perfect for both impressing a first date, and not getting incredibly sick from the quintessential first-date dish. In addition to their fancy appetizers, Enoteca Sociale carries gluten-free pasta that tastes better than the original.

Finding gluten-free desserts that don’t taste like a blend of gravel and stevia can be a trial. Luckily, Prairie Girl makes gluten-free cupcakes. Though the flavours are limited, the icing is plentiful and the crumb isn’t gritty.

The gluten-free donuts at Jelly Modern. Photo by Jesse Milns. 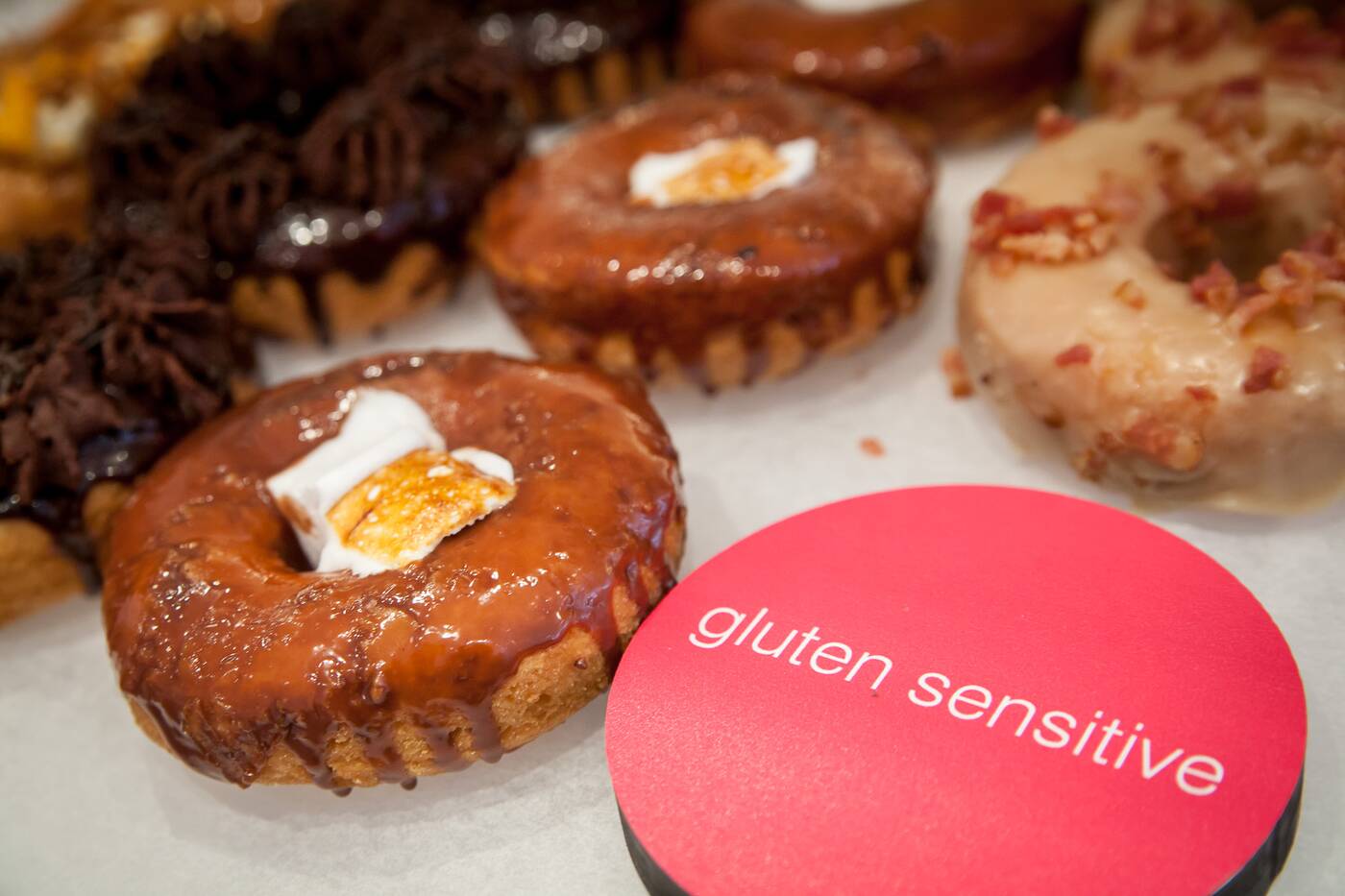 Like A&Ws, gluten-free donuts are actually more ubiquitous in Toronto than one might expect, but Jelly Modern Donuts are the only ones that actually taste like the real donuts I remember from my pre-diagnosis carefree youth.

To me, finding gluten-free poutine felt the way it does when weird kids with hygiene issues find their first improv troupe: like a total and absolute saviour. Poutini’s gluten-free gravy tastes exactly the way I remember real gravy to taste, and the name of their smaller size ( Teeny Weeny Tiny) makes it feel guilt-free.

Fresh is known for making dishes so delicious, you wouldn’t immediately pick up on the idea that they’re made with specific diets in mind. Their pancakes are no different. They’re fluffy, light, and customizable with different additions and flavours. 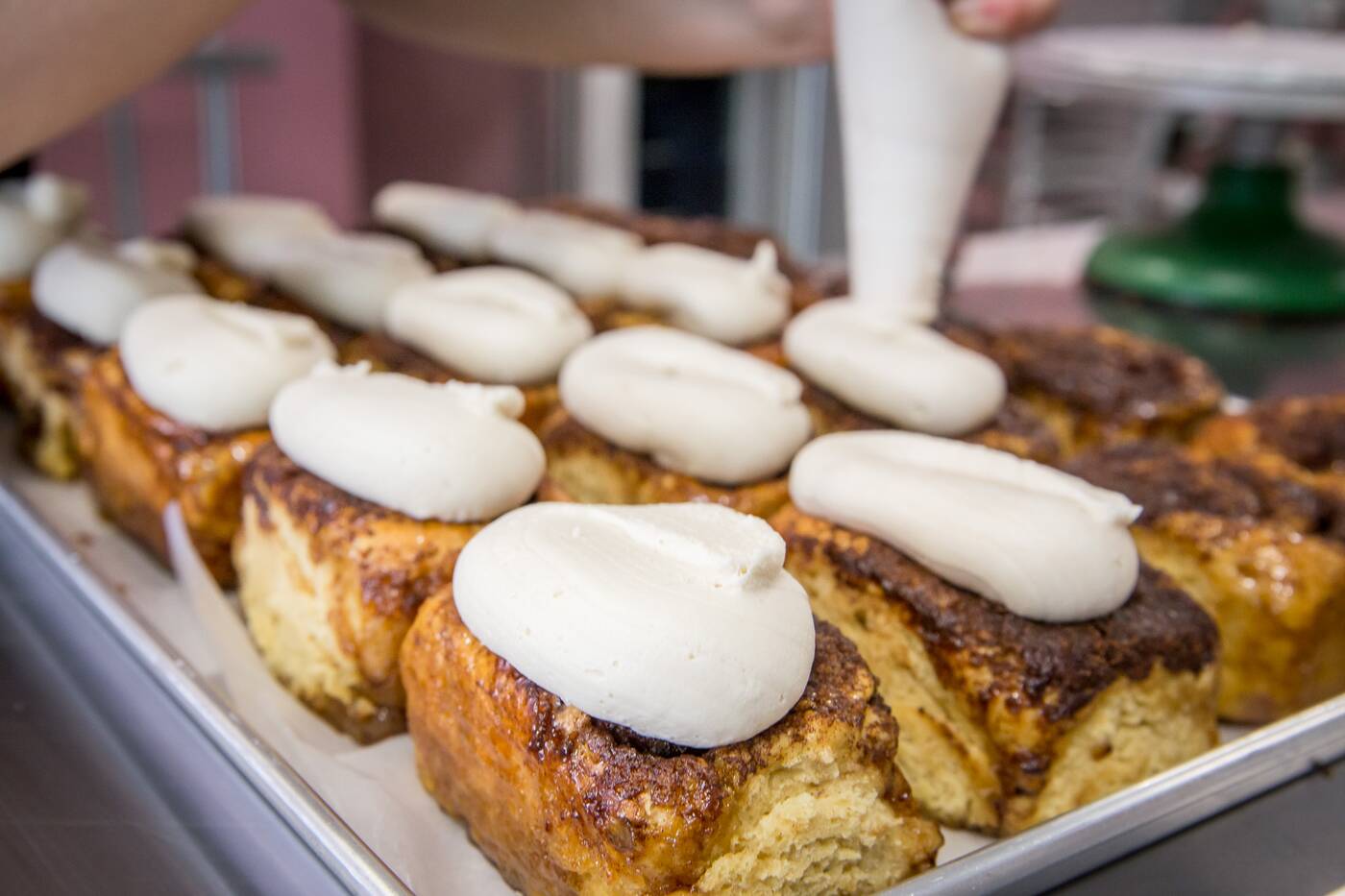 Cinnamon buns are another thing that can be hit-and-miss in gluten-free form. Bunner’s cinnamon buns definitely hit. Their buns, which are also vegan, pack a big punch of sweet cinnamon sugar, doughy pastry, and generous icing.

Holy Chuck is a master of burgers. Luckily, their patties are gluten-free and they offer a gluten-free bun that doesn’t fall apart upon the first bite. Best of all, you can wash down your gluten-free burger with one of their shakes- most are also gluten-free.

Cock-A-Doodle-Doo bakes up their own gluten-free bread in a few different forms, but their rye bread is an absolute standout. They come in compact little loaves that could last a restrained person a week, but don’t make it more than a few days in my kitchen. CADD is also soy-, refined sugar- and dairy-free.

Sorelle & Co is in the epicenter of fancy and their baked goods definitely reflect their location. Though they have a number of different gluten-free, soy-free, sesame-free, nut-free, preservative-free and vegan treats, their scones are the best. They have a range of flavours and are the ultimate in flaky goodness. 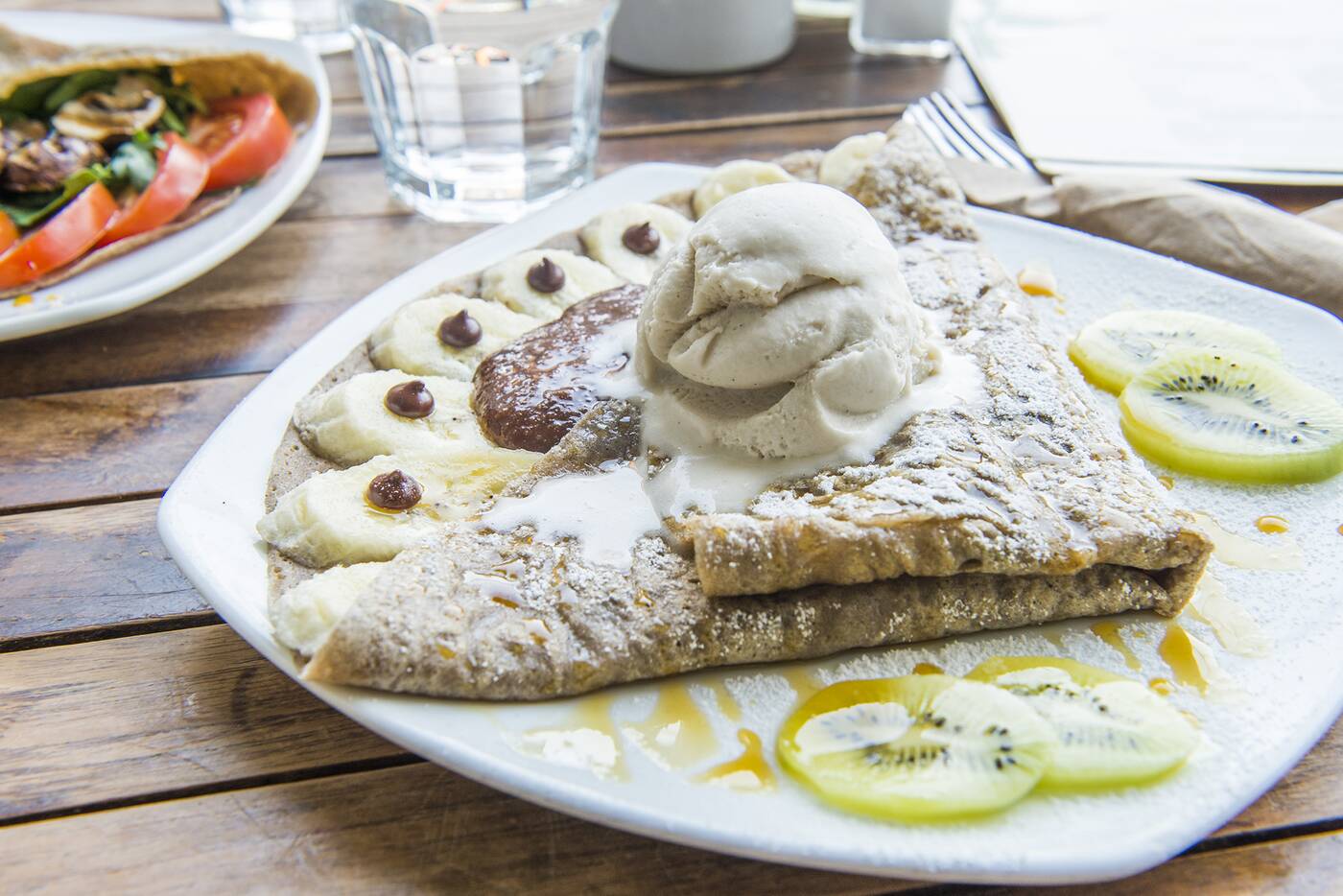 Everything is gluten-free at Hibiscus Cafe, and they offer their delicious crepes in both sweet and savory combinations. Try the brie and pecan crepe if you’re in a savory mood and finish it off with the vegan dulce de leche and kiwi- an unexpected and amazing combo.

Tori’s Bakeshop makes delicious pies that are dairy-, egg-, and casein- free in addition to being gluten-free. Their perfectly spiced pumpkin pies are the ideal dessert for those of us who feel left out during the holidays.

Bloomer’s is one of the first places I recommend to my celiac brethren when asked for gluten-free tips (which happens a lot when you talk about yourself as much as I do). Their carrot cake is insanely good- not too dry, not too fragile, with lots of delicious icing.

Unfortunately, a lot of veggie burgers are made with glutinous grains, which is not fun for those of us who are both gluten- and meat-free. Luckily, Live Organic Food Bar makes veggie burgers that are free of gluten and animal products without being free of taste. 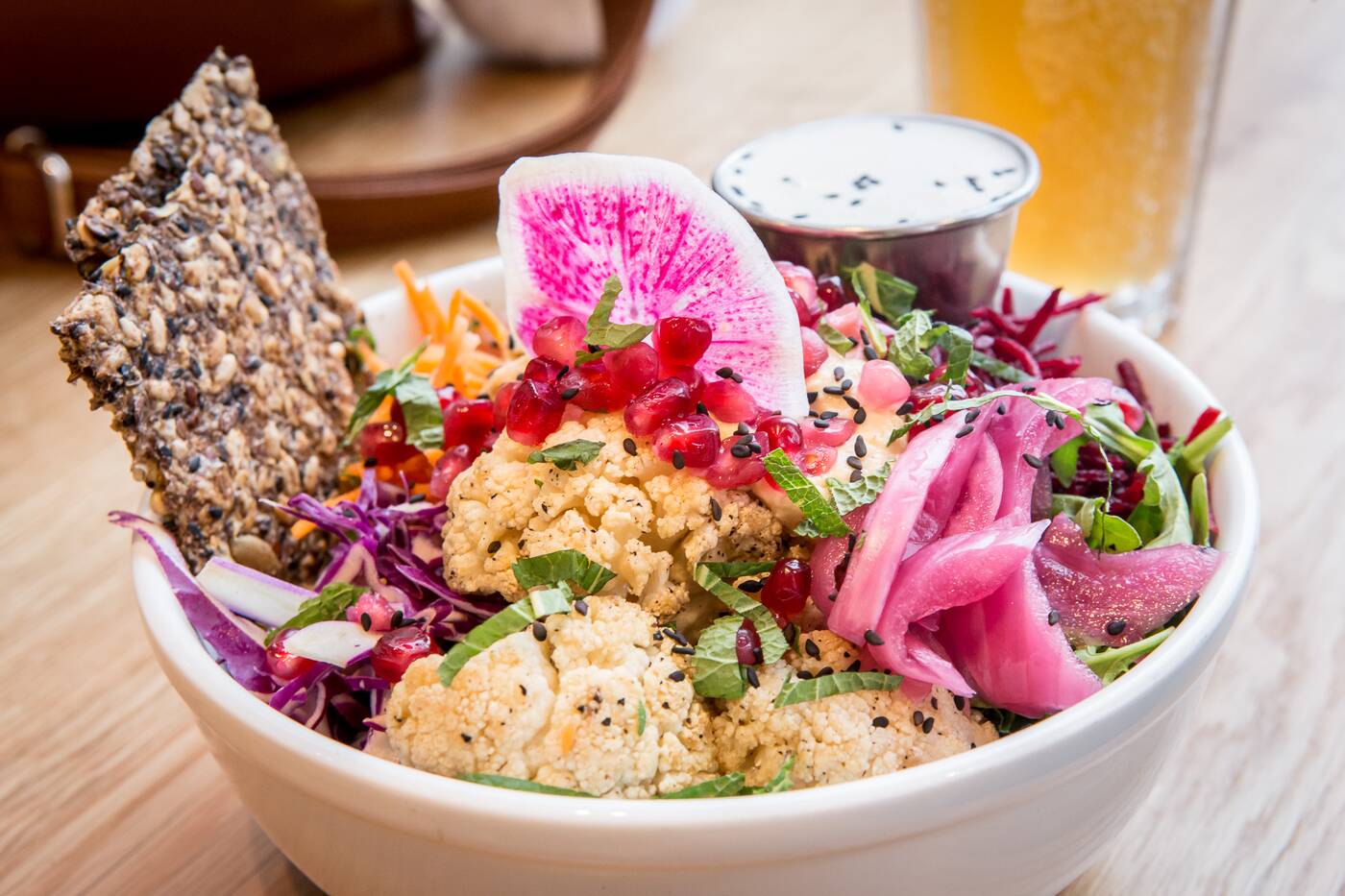 The Cauliflower Tahini bowl at Kupfert and Kim. Photo by Jesse Milns.

Gluten-free Bowls and Kupfert and Kim

Grain bowls are the hottest lunch option for those of us who want to carbo-load under the guise of appearing healthy. Though the grains are usually gluten-free, the toppings can be a minefield of hidden gluten. Kupfert and Kim’s entire menu is gluten-free, and their bowls are delicious and carb-heavy.

Gluten-free Mac and Cheese at The Beet

The Beet’s mac and cheese is over the top in its cheesy goodness. More than just cheese-flavoured water over overboiled flaccid noodles, The Beet combines Quebec cheddar sauce with gluten-free noodles and tops it off with crunchy gluten-free breadcrumbs and pickled jalapenos.

Pan-Asian food is one of the most challenging genres of food due to the wheat in soy sauce, but Riz on Bayview has us covered. They have a huge gluten-free menu which includes both all-you-can-eat and a la carte.

Cut the Cheese offers variations on the traditional grilled cheese, and use gluten-free bread that doesn’t taste stale or too chewy. Go for the Beet-It with beets, tomatoes, and mushrooms, a curious combination that works weirdly well. 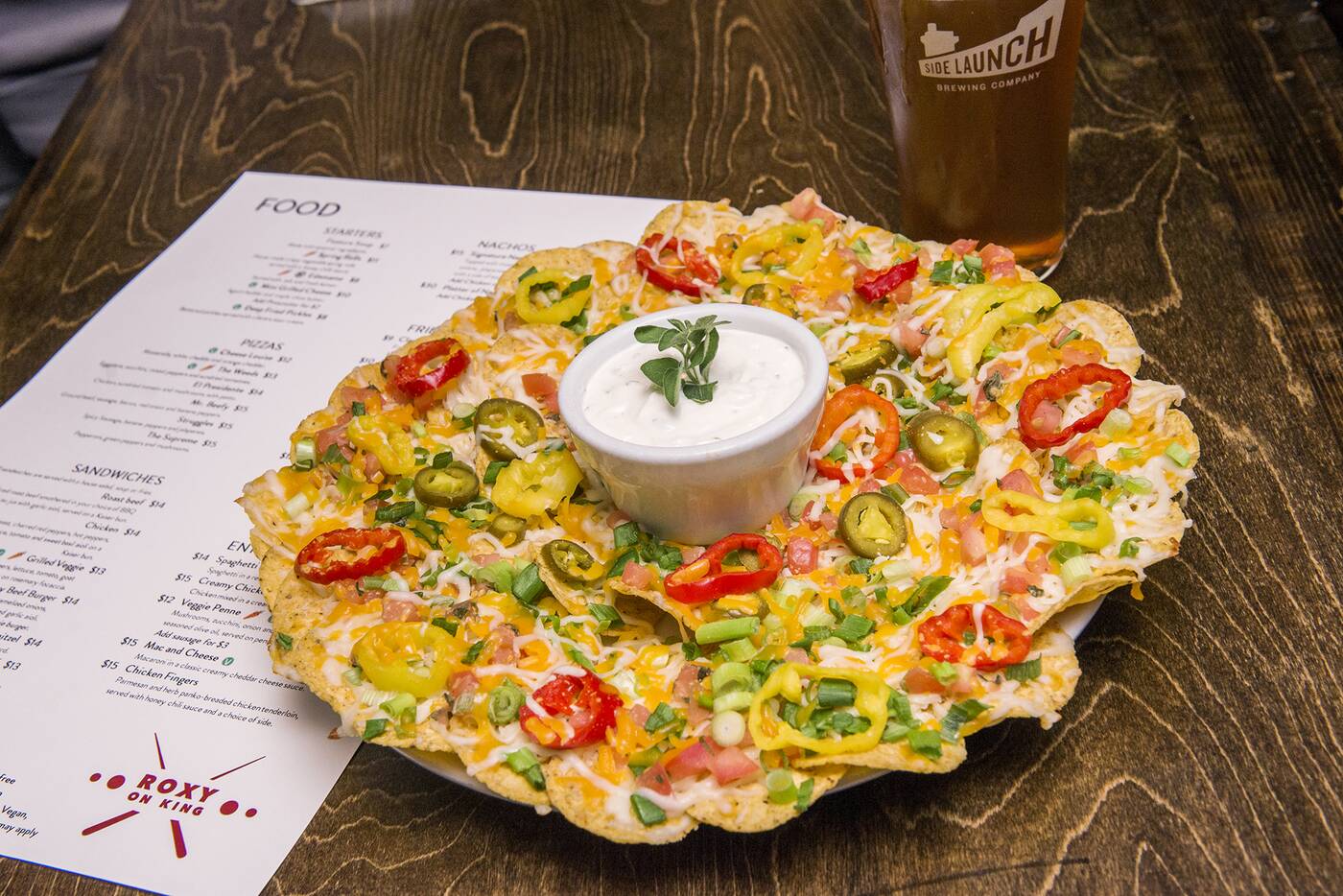 The excellent gluten-free nachos at Roxy on King. Photo by Hector Vasquez.

Gluten-free Nachos at Roxy on King

I’ve waxed poetic about the nachos from Roxy before, and I will again. The chips and toppings are totally gluten-free (while some places use chips with wheat or include gluten-y queso).

Bakerbots only offers one variety of gluten-free cookie, but it is heads and shoulders above the typical crumbly or anemic-looking gluten-free cookies in the city. It’s packed with chocolate and various sweet accoutrements that make it interesting in each bite. 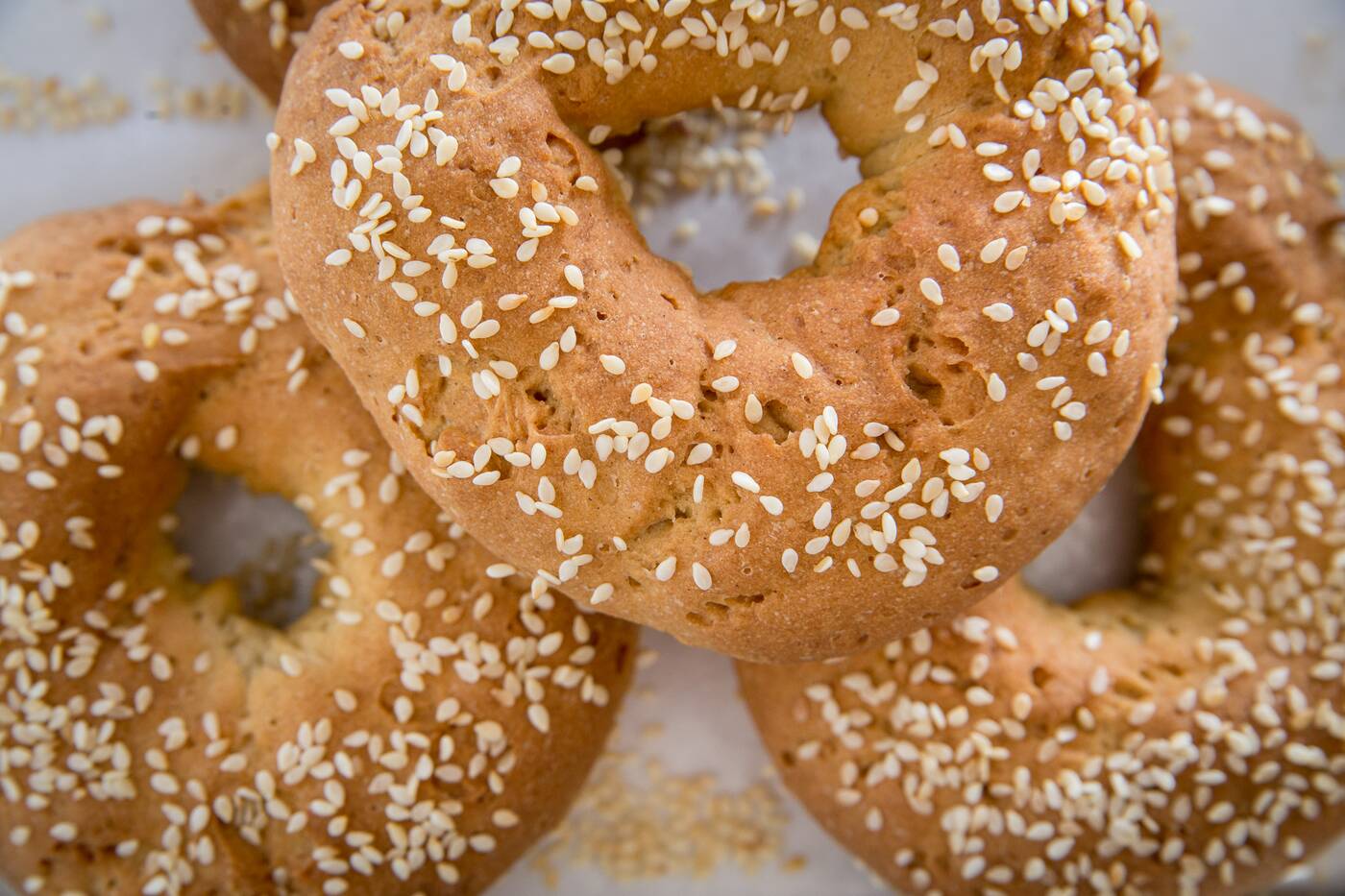 The gluten-free bagels at Almond Butterfly. Photo by Jesse Milns.

All of Almond Butterfly’s treats are baked on site, so be sure to get there early to get a fresh bagel and cream cheese. They also serve delicious sandwiches, so kick it up a notch and get some deli meats on that bagel- you deserve it.

Starving Artist is the go-to place for waffles, and thankfully all of us gluten-free folks don’t have to miss out. They come with a variety of options- think everything from eggs to smoked salmon to ice cream.

Though it’s not advertised on the menu, Susur Lee’s Luckee offers gluten-free options to the traditional dim sum menu. When I visited, I was able to have a full dim sum experience with their crafty substitutions and gluten-free soy sauce. 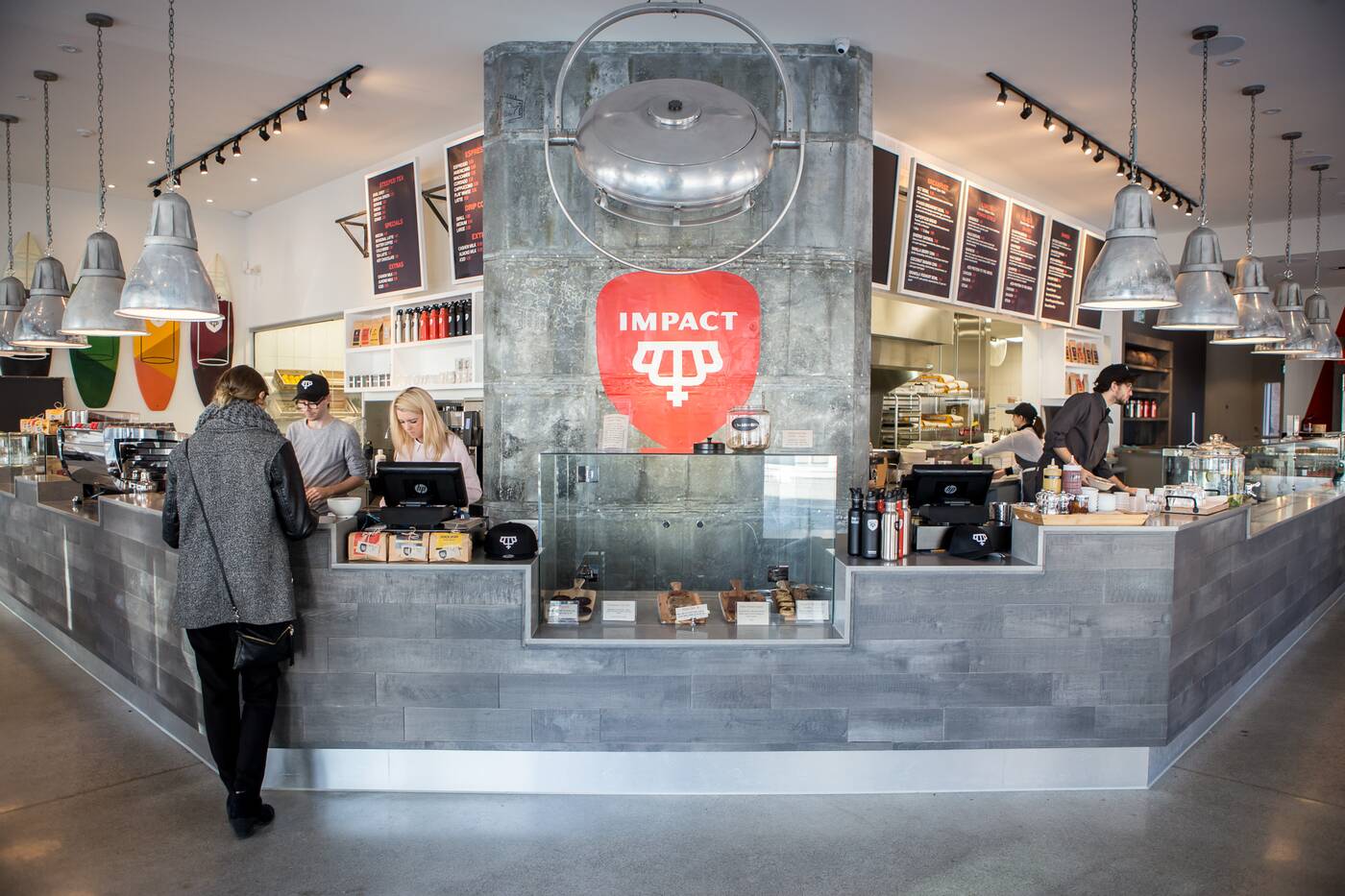 The counter at Impact Kitchen. Photo by Hector Vasquez.

Impact Kitchen is the place to go for clean eating, and their breakfast offerings include both savory dishes (think root veg, avocado, and eggs) and sweet treats (vanilla chia pudding). Their weekend brunch also includes paleo waffles and steak & eggs.

Chicken Pot Pie is incredibly hard to make as a gluten-free dish (gluten is typically in both the pastry and the gravy), but de Floured does it right. Their pastry is flaky and the delicious filling is creamy and wonderful.

Gluten-free Beer at The Rhino

The Rhino is a great place to hit if you miss the foamy, hoppy taste of liquid mistakes. In addition to their selection of ciders, they have a good number of gluten-free beers instead of the usual single variety tacked on the end of the beer list. 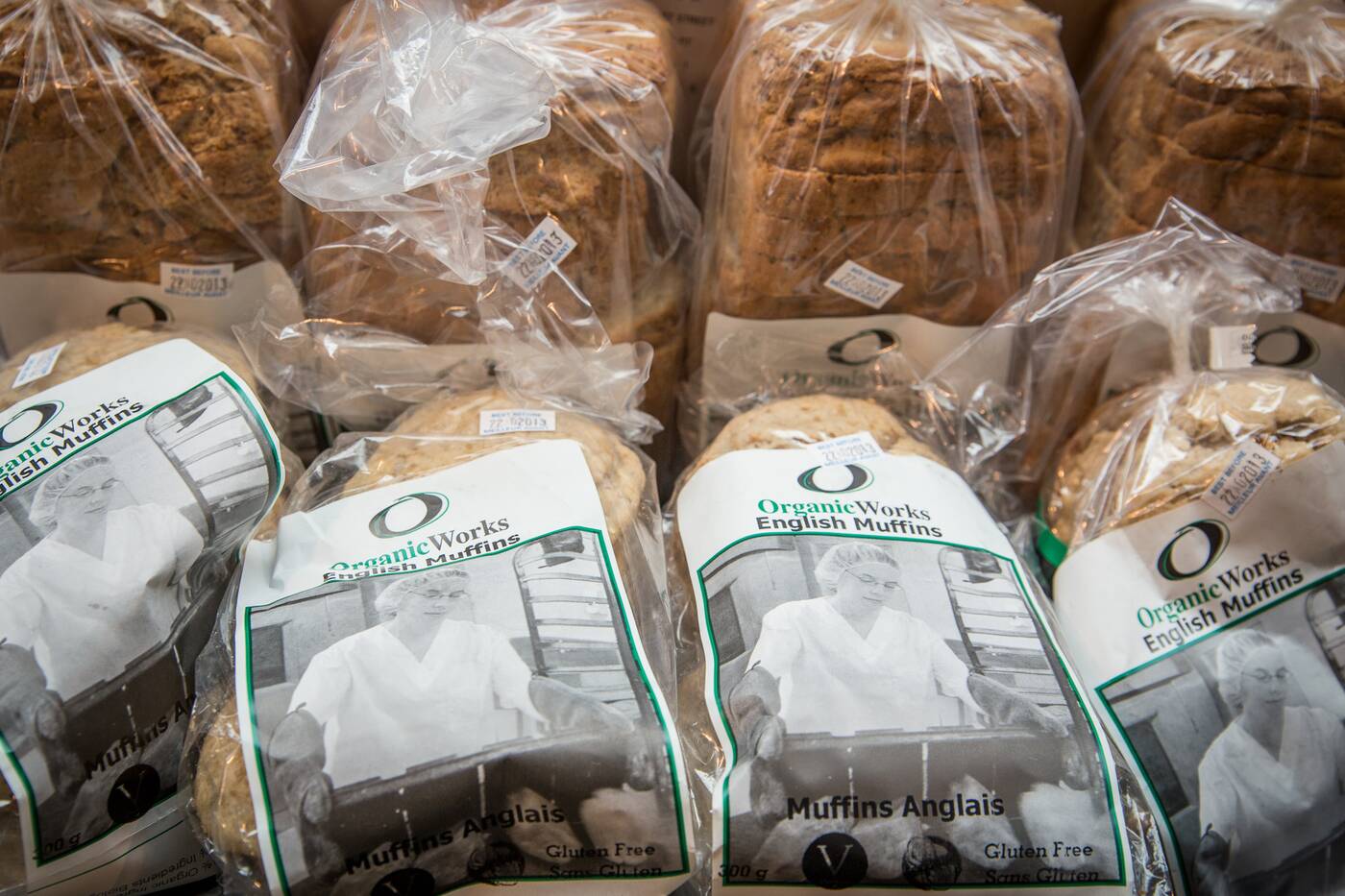 The gluten-free bread from Organic Works, available at The Big Carrot. Photo by Jesse Milns.

Gluten-free Bread at The Big Carrot

Though most grocery stores now have loaves of frozen gluten-free bread hidden somewhere in their icy mazes, The Big Carrot has the best quantity and quality when it comes to gluten-free bread.

Please note that not all of these restaurants have gluten-free kitchens and in cases, there is a possibility of cross-contamination.

Photo by Jesse Milns at Cock-A-Doodle-Doo